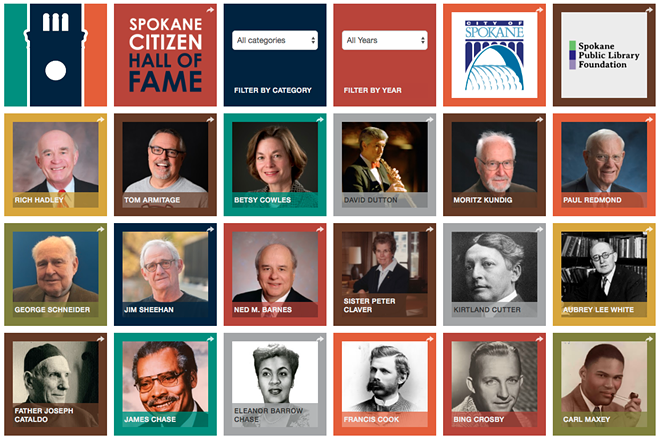 Screenshot, spokanelibrary.org
A snapshot of previous inductees into the Spokane Citizen Hall of Fame.

This year, the Inlander publisher and co-founder Ted S. McGregor Jr. is a finalist in the category of Innovation and Leadership.

The Hall of Fame recognizes Spokane individuals for achievements in six categories while also raising money to support the Spokane Public Library Foundation, which funds a range of programs and services offered by the city's library system.

Honorees in each of the six categories were chosen from more than 100 nominations; this year's are listed below. Final winners and inductees into the Spokane Citizen Hall of Fame will be announced at an event on Tuesday, May 1.

“These 17 honorees represent some of our greatest champions in the community, and we are so excited to celebrate them with our entire community,” says Sarah Bain, director of development for Spokane Public Library Foundation.

The Citizen Hall of fame was established in 2015, and includes inductees both living and deceased, including many of Spokane's early civic leaders. See a list and achievements of all inductees on the Spokane Public Library's website here.