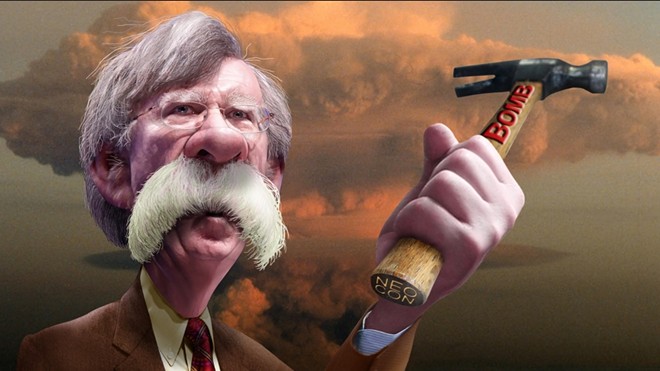 Illustration of John Bolton. In real life, his mustache is larger.

Dawn of the Ted
Inlander Publisher Ted S. McGregor Jr. has been named a 2018 Spokane Citizen Hall of Fame honoree, along with Shawn Vestal, the star columnist of McGregor's bitter rival paper.

What Zinke Thinkes
Inlander writer Samantha Wohlfeil got a chance to ask Interior Secretary Ryan Zinke about the interior... of his mind.

Bumpy road
The city has tried to fix neighbors concerns through a North Monroe marketing campaign... but have they inflamed tensions further with who they picked?

What causes Risch to take a stand
How much does Idaho Sen. Jim Risch hate late former Idaho Gov. Cecil Andrus? So much he's willing to delay a federal omnibus budget bill because of a forest named after him. (Spokesman-Review)

There are some who say "Maria Cantwell" But I say to you, Maria !
How Democratic Sen. Maria Cantwell is pushing to boost affordable housing. (Spokesman-Review)

McMaster of none
H.R. McMaster is out as national security advisor, being replaced by ultra-hawk John Bolton. (New York Times)

He has affairs with Playboy models for the articles
Karen McDougal, Playboy model, says that she had an affair with Trump, after which he tried to pay her for sex. (CNN)

US Senate candidate Joey Gibson, magnet for the violent alt-right, is holding a rally in Spokane Valley on Sunday