Cirque Du Soleil’s Crystal is a kaleidoscope of art, movement and music.

It’s a perfect fusion of playful and solemn as manipulated through light projectors and its accompanying score. Each scene Wednesday, on opening night at Spokane Arena, was as captivating as the next, from the transitions with axels on the ice to the heart palpitation-inducing acrobatics in the air. It’s difficult not to hold one’s breath waiting for a jump to land or a spin to be perfected.

Crystal retains classic elements of Cirque shows, including a clown-like character who juggles and made viewers chuckle with his missteps while introducing an original and unique show thanks to an up-to-now foreign element for Cirque shows: ice.

The show opens to Crystal, a young writer, who is taunted by her peers. Being a creative misfit, she ventures on a path to find her voice and create her own narrative through confrontations with her alter ego and a cast of whimsical characters. At times, Crystal’s voiceover booms through the speakers and, paired with the music, creates an evocative effect, a nice way for the audience to catch a glimpse of her inner person growing through self-reflection.

The costumes were clever and enhanced each number, like when Crystal steps into a corporate world and some of the cast wears a typewriter and others sport a briefcase. In sync, they mechanically type away like droids showcasing a world void of color and creative individuality before breaking into dance. The reflective surface of the ice allows it to transform into ethereal sets like a ballroom or nature scene.

The cast pushes props and furniture onto the ice like a crystal-like grand piano or a living room set where Crystal’s family mindlessly watches television. The creative minds behind Crystal played with scale and angles to perfect effect. An interactive show, it doesn’t stay away from characters playing with the crowd like Crystal herself conversing with several audience members in the front row, or items thrown into cluster of people to be caught and thrown back.

Meanwhile, musical arrangements oscillate from pop culture songs like Sia’s “Chandelier” to classical pieces, all accompanied by the different musicians playing the saxophone, violin, electric guitar, acoustic guitar, clarinet and even an accordion at various periods, some while gliding on the ice.

Aerial twists and flips, and characters performing terrifying moves in a seamless manner, like balancing their body on a minuscule stick, are executed perfectly — and not without teamwork.

At one point, Crystal and her partner show off their acrobatic talents through a series of harmonious and daring movements. In the end, the entire cast comes on stage to Crystal’s version of U2’s “Beautiful Day” and gifts the viewers one last number.

To watch the entirety of this show is to be immersed in an otherworldly dimension where art has no rules and creative boundaries beautifully dissipate. 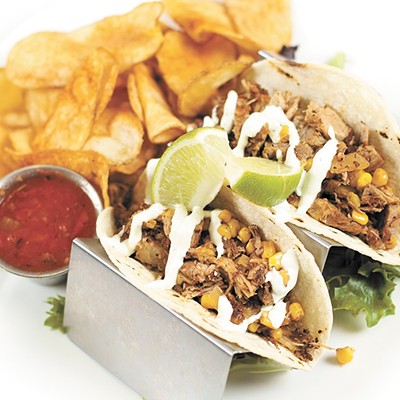 Citing illness, the Eagles push Tuesday's Arena show to May 24

Speaking of For Fun! , Arts & Culture