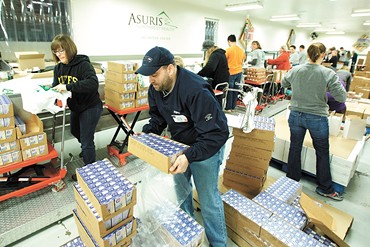 That number breaks all previous records and is thanks to donations from participating restaurants, diners and event sponsors Sysco and Dairy Farmers of Washington. This Thursday, more than 17,000 of those meals were distributed by Sysco to Second Harvest.

While Inlander Restaurant Week encourages the community to support local restaurants across the region with a visit during this typically slower time of the year, it's also a time to consider the many members of our community who can't afford to dine out during IRW, or even to put enough food on the table for themselves and their family — one in eight people in our region don't know where their next meal is coming from.

Here's how the donations generated by this year's event break down:

Opening last summer, My Fresh Basket in Kendall Yards, at the corner of Monroe Street and Summit Parkway, was designed to cater to consumers’ preferences for buying local and organic products, among other trends. The store is also half the size of most other grocers and uses a perimeter layout to station its main departments, including the deli, produce stands and bakery.

“In an industry where stores constantly seek to differentiate themselves from competitors, we believe My Fresh Basket is the model for today’s shopper,” says store director Matt Grittner.

In conjunction with the honor, My Fresh Basket is featured on the cover of Progressive Grocer’s February magazine.

A new regional culinary celebration is coming to the Coeur d’Alene Resort on the first weekend of April. The two-day Coeur d’Alene Food & Wine Festival on April 6 and 7 is set to include several hands-on cooking demonstrations and wine tasting seminars, along with luncheons and two multi-course dinners with featured wine pairings. 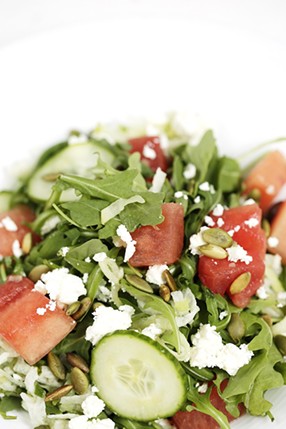 Young Kwak
Find this watermelon salad on the Restaurant Week menu at Tortilla Union in downtown Spokane.
Don’t get yourself into a #FOMO (fear of missing out) tizzy and miss the final days of the sixth annual Inlander Restaurant Week, which ends its 2018 run on the evening of Saturday, March 3.

Before you read any further, it’s definitely advisable that you visit the IRW website or pick up a hard copy of the guide (still available at participating restaurants and our Kendall Yards office) to make your picks and call for reservations as soon as possible.

For those who’ve already hit up a few (or many) of the participating local restaurants, as well as folks who’ve yet to fit a dinner into their schedule (or budget) now that the annual 10-day event is a full week in, there are plenty of helpful reviews, food photos and more to be found across the web to help guide your decision.

Definitely search for the hashtag #IRWRaveReviews to see local diners’ photos of favorite dishes and experiences, and don’t forget to share your own photos using that hashtag to generate a donation to the event’s designated charity, Second Harvest.

Samantha Wohlfeil photo
Doesn't this already look so much tastier than the drive-thru version of a breakfast sandwich?

We've all been there. You watch recipe videos on social media over the weekend and feel inspired, but when breakfast time actually rolls around Monday morning, you're running out the door and grabbing a bagel from the coffee shop instead.

Break that cycle and save some moola with this insanely easy breakfast sandwich prep that tastes SO much better than fast food and will run you just over $1 per sandwich. This weekend, throw on an episode of your latest Netflix/TV binge, and by the time the credits roll you'll have six days' worth of breakfast ready to pop in the fridge. Samantha Wohlfeil photo
No, a mouse didn't nibble on the cheese ... I like to rip the edges off so there's less melty cheese mess when you reheat these in the microwave, but do whatever works for you!

If you're not sure what your week is looking like, put two in the fridge and the rest of your tightly wrapped sandwiches should fit in the English muffin sleeve, making for an easy freezer pack.

When you're ready to eat: wrap in a paper towel and microwave for 1 minute and 45 seconds if fresh and about 3 minutes if frozen. 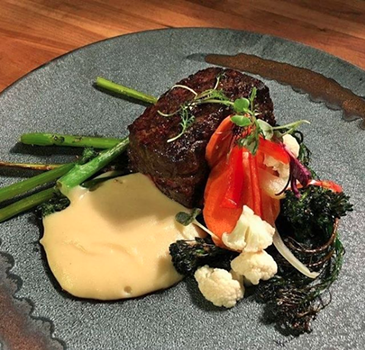 As you dine, make sure to share your experiences on social media using the event hashtag #IRWRaveReviews to help rack up donations to the event's regional beneficiary, Second Harvest. (Make sure your Instagrams, Facebook posts and Tweets are public so they can be viewed and counted!) Each post shared using the #IRWRaveReviews hashtag will translate to five donated meals to Second Harvest, on behalf of food services provider Sysco.

For those who haven't yet made reservations (do so soon!) or are looking for more local spots to add to their Restaurant Week itinerary, the hashtag is also a great way to get a sneak peek at what other diners are loving on the 100+ menus this year.

A trio of local, beer-loving game designers have finally reached success with a third attempt to crowdfund their multiplayer card game, Hammered Heroes.

There’s still time to back the locally-made game on Kickstarter — the campaign runs through next Wednesday, Feb. 28, which might be, at least for the foreseeable future, one of the only ways to get your hands on a copy.

Hammered Heroes was designed by Adam Boyd, Clancy Bundy and Adam Harum. As its name implies, the game is heavily themed around beer, beer puns and the drinking of it, though imbibing is not a requirement to play.

“The game functions like that old card game War — for each round, a player plays a Hammered Hero card with a number value, hoping to win the round with either the highest or lowest card, depending on that round's condition,” Boyd explains.

“It’s a ‘take-that’ style card game within the same vein of Munchkin, Smash Up or even Exploding Kittens. And because the overall theme of the game is fantasy meets drinking culture, we have some optional rules to play with drinks.” 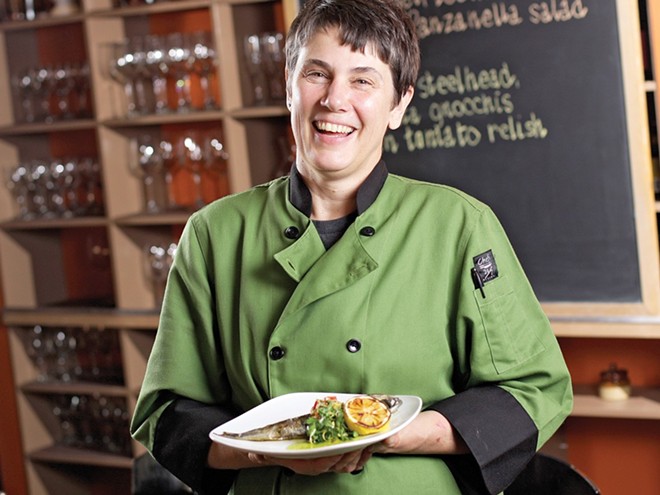 For the fourth year in a row, a Spokane chef has been named as a semifinalist for the prestigious James Beard Awards, an annual honor bestowed by the NYC-based James Beard Foundation.

Chef Anna Vogel, who co-owns the Browne's Addition restaurant Italia Trattoria with Bethe Bowman, was named a semifinalist for the Beard Awards' Best Chef: Northwest category, one perennially dominated by chefs based in Portland and Seattle.

Vogel's culinary resume includes past stints in major global cities: Sydney, Boston, New York and Seattle. She opened Italia Trattoria, which offers seasonal dishes rooted in Italian cuisine and features Northwest flavors and ingredients, with Bowman back in 2010. Since then, the restaurant has established a respectable local following and a reputation as one of the best fine-dining spots in the area.

Subsequently over the past three years, Inland Northwest chefs who've been named James Beard Award semifinalists for the Best Chef: Northwest category include Jeremy Hansen, in 2015; Adam Hegsted, in 2016; and Laurent Zirotti, in 2017. 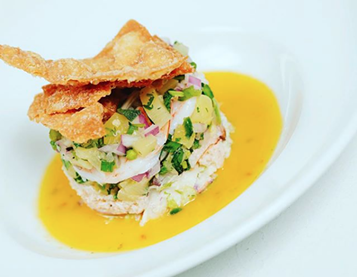 Young Kwak
Twigs Bistro & Martini Bar is serving up this shrimp-crab pineapple tower on its 2018 Restaurant Week menu.
The day we’ve all been waiting for is finally here: Menus for all 107 of this year’s Inlander Restaurant Week participants are now live on the IRW website and ready to be drooled over!

This year’s event is once again bigger than ever, and North Idaho is giving those of us across the state line in Washington a run for our money with a record-breaking 28 eateries participating across Coeur d’Alene, Post Falls and Worley, Idaho.

Restaurant Week 2018 brings plenty of other newness with 12 restaurants that have never participated before, including several spots that weren’t even open last year, like Palouse Bar and Grill, Cascadia Public House and Vine & Olive.

Back this year for the sixth installment of Restaurant Week are 24 local dining mainstays that have participated every year since the event’s inception back in 2013, which featured 53 restaurants.

Young Kwak
Chef Steve Leonard, recruited to helm the renovated and rebranded Steam Plant Kitchen + Brewery, has left his post a week after the restaurant's reopening.
This week's issue of the Inlander, on the street and online Thursday, includes a feature on the new look, name and menu for the Steam Plant Kitchen + Brewery, which reopened to the public last Monday following a seven-month, $4 million renovation to the historic downtown space owned by Avista.

In response to our inquiries into Leonard's departure, Steam Plant Kitchen + Brewery General Manager John Lockhart says via email that restaurant management cannot provide any details on the nature of Leonard's departure, but that they "wish him well on his future endeavors."

Although the sixth annual Inlander Restaurant Week doesn’t officially start until February 22 (running until March 3), local food lovers can get a sneak peak of a few featured menu items, and the menus themselves, during a special preview of the annual 10-day culinary celebration.

In addition to samplings of a menu items (we've seen the list — it's good) from seven of this year's participating restaurants, along with artisan cheeses from select Dairy Farmers of Washington creameries, guests of the event will be the first to see the official list of all restaurants participating in this year’s Restaurant Week, and can browse the more than 100 three-course menus for all of those restaurants across the Spokane-Coeur d’Alene area.

Tickets ($31/person; ages 21+) for the event are on sale now, and will be limited in number, so make sure to buy yours early if you intend to go. All proceeds from the event support Second Harvest’s work to provide healthy food to families across the region. Entry include one glass of wine from Barrister; guests will also enjoy live music throughout the evening by local musician Kyle Richard.