Although the sixth annual Inlander Restaurant Week doesn’t officially start until February 22 (running until March 3), local food lovers can get a sneak peak of a few featured menu items, and the menus themselves, during a special preview of the annual 10-day culinary celebration.

In addition to samplings of a menu items (we've seen the list — it's good) from seven of this year's participating restaurants, along with artisan cheeses from select Dairy Farmers of Washington creameries, guests of the event will be the first to see the official list of all restaurants participating in this year’s Restaurant Week, and can browse the more than 100 three-course menus for all of those restaurants across the Spokane-Coeur d’Alene area.

Tickets ($31/person; ages 21+) for the event are on sale now, and will be limited in number, so make sure to buy yours early if you intend to go. All proceeds from the event support Second Harvest’s work to provide healthy food to families across the region. Entry include one glass of wine from Barrister; guests will also enjoy live music throughout the evening by local musician Kyle Richard.

AN ARRIVAL AND A DEPARTURE FOR KENDALL YARDS' BEVERAGE SCENE 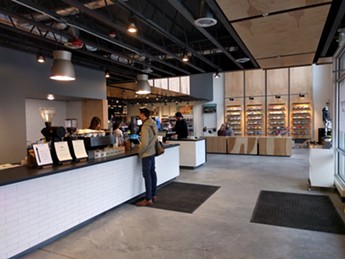 Indaba's newest, third location shares a space with Fleet Feet Sports in Kendall Yards.
In a move that may have come as a surprise to many, including us, Spokane's Indaba Coffee Roasters this week debuted its third location in the greater downtown core. Located inside fitness apparel and shoe retailer Fleet Feet Sports' new Kendall Yards location (just down the street from the Inlander offices, and in a space adjacent to Maryhill Winery), Indaba's new coffee counter celebrated its soft opening this Thursday.

Indaba owner Bobby Enslow tells the Inlander the partnership with Fleet Feet was a recent development, and that Indaba is still moving forward with plans for another new location in Kendall Yards, now its fourth, at a building still under construction on the west end of the development, which also will house a locally-owned donut shop called Hello Sugar.

The new Fleet Feet Indaba location is open Mon-Sat from 10 am-5 pm.

Earlier this week, the local beverage purveying partners of Solace Mead & Cider in Kendall Yards announced that the tasting room's last day of business will be later this month, on Jan. 27. Until then, customers can stop by Wed-Fri from 4-8 pm and on Saturday from 2-9 pm.


"Kendall Yards,
We are closing, as Hierophant and Twilight pursue endeavors of growth and expansion. We thank you for your support and we can't wait to tell you what we are up to! See you at the Kendall Yards Night Market.
Best,
Jeremy and Michelle Kyncl, Will & Jackie Jordan"

Both couples plan continue operating their Green Bluff production facilities and tasting rooms; their respective libations will also continue to be sold throughout the region, both in local restaurants and bars, and in bottles.

IN THIS WEEK'S ISSUE
This week, we unveiled the weeks-long planning that went into the Inlander's first ever Burger Issue. In it, we have round-ups of our personal favorites, as well as lists of amazing veggie/vegan options, some of the best burgers for less than $10, non-beef burgers, where to get a great deal on a beer and a burger around town and much more.

We know not everyone is going to agree with what we chose to feature (or not feature) in this issue, and that's fine. Burgers are one of the most ubiquitous menu items out there (seriously, tell us an American restaurant that doesn't have one on the menu), and in the time we had, it would have been nigh impossible for our small staff had to literally eat them all. That said, we really do welcome your comments and feedback! It'll help us figure out what to cover next time.

In case you missed it, we previously shared here on the blog the news that Chef Tony Brown, of Ruins and the former Stella's Cafe, is planning a new downtown Spokane restaurant set to open later this spring. Get the preliminary details here, and look for more about the project in next week's print edition (Jan. 25).