Call of the Wild

The acts you can't miss at Sasquatch!

By Laura Johnson and Chey Scott

Sasquatch! Music Festival is back with one scheduled four-day weekend packed to the gills with national and regional talent — rain or shine. Big headliners include Robert Plant, Lana Del Rey, Modest Mouse, Ryan Adams and Sleater-Kinney, but they're hardly the only acts you'll need to check out. We've broken down the important categories: Dance music, best acts and bands you may not have heard of yet. Amazingly, the festival isn't quite sold out, so get your (overpriced) tickets now and get packing for a long Memorial Day weekend you may or may not remember much of. (LAURA JOHNSON)

Gogol Bordello makes uninhibited, free-flowing music that will cause you to consider selling all of your possessions and follow them around the world. This Manhattan-based gypsy/cabaret punk outfit is sure to put on one of the craziest, dance-filled sets of the entire weekend. Full of rockin' accordions, fiddles and singing/yelling lyrics, they'll make you feel uninhibited. (LJ)

It's perfect timing that this upbeat electro/dance/pop duo is playing just as the sun starts to sink behind the basalt cliffs of the Gorge. By the end of Chromeo's set, glistening bodies will be awash in the soft neon light of glow sticks — a festival requirement, btw. (CHEY SCOTT)

No matter how hard you dance, no one — and we mean no one — can match the sweaty, frenetic dance moves of Future Islands frontman Samuel T. Herring. By the end of this synth-heavy set by the Baltimore-bred trio, Herring will be so drenched you'd think he dove into the river between songs. (CS)

The bands nearly worth the $350 price tag:

After all that dancing, you'll need to cool it down. One listen to singer-songwriter Father John Misty's (aka Joshua Tillman, formerly of Fleet Foxes) depressive yet sweeping melodies will help you with that. Now based in New Orleans, he offers some of the most thought-provoking, soul-searching lyrics out there. His new album I Love You, Honeybear is already one of the most innovative of the year; expect the same from his show. (LJ)

This Grammy-winning songstress exploded onto the scene less than 10 years ago. Her whirlwind career since, touring internationally and collaborating with big-name musicians of all genres, is reason enough not to miss her resounding, complex set. (CS)

The world-renowned Australian psych rockers' set will feel like a trip back to the original psychedelic rock era in every way; from the crowd's funky festival attire, use of choice recreational substances and the slow, swaying interpretive dance moves circa 1968. (CS)

They've scheduled him for Monday night, naturally. As festivalgoers' energy has waned by Day Four, the promoters put arguably their biggest headliner on the final night, hoping people will stick around. We won't hold Lamar's new collaboration with Taylor Swift ("Bad Blood") against him; you should stay and watch this incredible performer/lyricist. (LJ)

Your new favorites by the end of the weekend:

All the friendly Canadians who flock to Sasquatch each year likely have long known about this B.C.-based indie/alt-rock group, which has been a big deal there for nearly a decade. Their latest album, Very Good Bad Thing, is a departure from Mother Mother's earlier folksy sound; you'll immediately be smitten with the group's sassy melodies and driving rock beats. (CS)

The kids into the Seattle hip-hop scene are already familiar with rapper/producer Sam Lachow, where he's already sold out multiple venues. His constantly quick-changing music — just try and keep up — is worth the effort to get out of your campsite and down to the concert area by 1 pm on Monday (we know it'll be hard). (LJ)

Led by Monica Martin's delicate vocals, this Baraboo, Wisconsin, six-piece incorporates awesome instruments like the clarinet, glockenspiel and banjo into their psych-rock/bluesy indie sound. They're another one of those early Monday acts. Seriously, power through and get down there to see their set. (LJ) ♦ 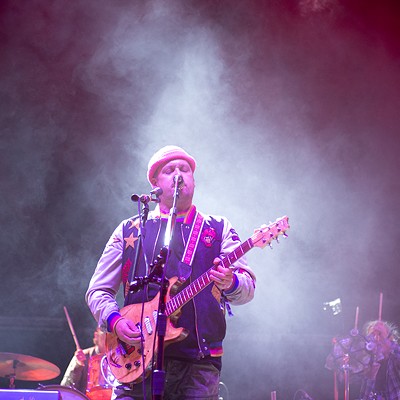