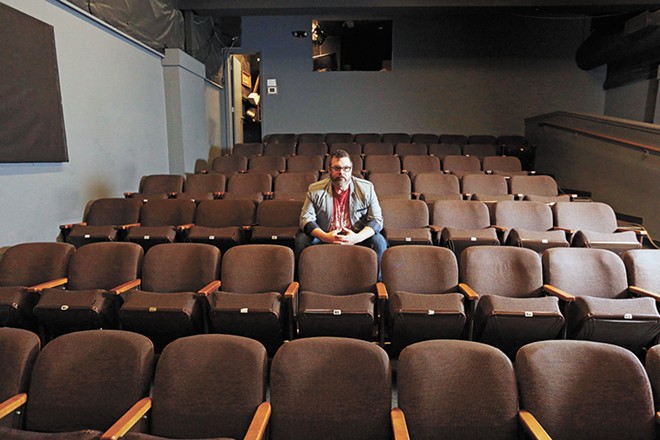 In the six months since statewide COVID-19 restrictions went into effect, local stages have been eerily quiet.

There's been the occasional outward sign of fresh activity, such as Stage Left Theater's livestreamed adaptation of its annual Playwright's Playground festival in late August. But the casual observer could be forgiven for assuming that area theaters had resigned themselves to switching off the lights and waiting out the pandemic.

As usual, though, there's a lot happening behind the curtain. Following the initial round of panic in March, theaters across the Inland Northwest began capitalizing on the downtime, recasting it as an opportunity for some long overdue self-reflection and housekeeping.

"We've never been paused this long," says Spokane Civic Theatre Creative Director Jake Schaefer. "And so, consequently, we've never had this much time to pay mind. All that 'non-space' space is finally getting looked at. We've reorganized. We've cleaned up areas. A lot of the backstage areas and storage areas are being evaluated for safety."

Among other things, the Civic staff has sifted through their marketing archives, scanning hundreds of photographs from past productions into digital formats. Loose documents are now in plastic sleeves in three-ring binders.

"That's all been cataloged and taken out to storage. That was a big deal for me from a management perspective, because I love this place. We're in a pandemic, but to know that there's some order for the building and also for the community is kind of a godsend."

The Civic has also been busy with what Schaefer calls "elbow grease" improvements. These are mostly small-scale, cosmetic building upgrades like painting and minor repairs.

"The board of directors approved a color palette several years ago, and all we're doing is taking that color palette around. I want it to feel like, when you come in, it's your Civic," he says. A capital campaign during the theater's upcoming 75th season will raise money to hire contractors to tackle the more ambitious projects.

Across town, Stage Left has likewise been busying itself with inventories and facility improvements, including a completely reworked lighting system, a digital background projector and a roomier front-row ADA path. Furthermore, its staff has been focusing on skill-building.

"Some of the first things we did were online fundraisers to help us pay utilities and rent, and then we started taking courses in grant writing," says Stage Left Theater Managing Director Jeremy Whittington. "Myself and our front-of-house manager, Joy Wood, started writing grants to different places."

At least two of those applications have already met with success. In late August, ArtsWA and the National Endowment of the Arts awarded Stage Left $3,000. And in early September, the theater received a $10,000 grant from the Innovia Foundation and Greater Spokane Incorporated's OPENTogether program.

With that money helping to lift some of the immediate financial pressure, the theater has been finding ways to hold safe virtual performances. The first was Playwright's Playground, three short pieces that were broadcast in a reader's theater format hosted by Rebecca Cook, on Aug. 29. They also did a prerecorded video adaptation of the theater's annual Kid's Korner festival last week, with scripts written by first graders from Evergreen Elementary in Mead.

On Sept. 26, Stage Left will debut Masterpiece Monologues. That will be another prerecorded video featuring about a dozen brief, one-person plays written by regional playwrights and performed by local actors. Masterpiece Monologues will also mark the theater's shift to a new platform called ShowTix4U, which is a combined ticketing agent and livestreaming service.

"We're trying to balance out live performances with prerecorded performances with spontaneous play readings. We're going to do fun things just to play with what theater can look like in this age of quarantines and social distancing. Technology has helped us minorly in the past, and now we're going to lean very heavily on it" without forsaking the immediacy of live theater, Whittington says.

Though based in Idaho, Coeur d'Alene Summer Theatre has been operating under many of the same strictures as its Washington counterparts. Unsurprisingly, it's also been engaged in many of the same internal processes, too.

"We have been cleaning our closets, looking at the way we do things, refining procedures, really starting to plan for next year and getting a head start on that," Jeff Conroy says.

Conroy, a 30-year veteran of nonprofit leadership and consulting, took over the executive directorship in mid-June, two months after the organization had canceled its 2020 season. To minimize expenses, he's reduced his pay to below minimum wage and reduced his supporting staff to a single part-time employee.

"We did qualify for the PPP, and that has helped us enormously, but we really wanted to try and get through this without taking any loans and taking on any debt long-term. So far, it's working OK. We've gotten a few grants, and we're going to start going full bore here soon," he says. Artist interviews for its 2021 season will begin in the next few months.

Because the theater is one of the few — if not the only — in the region to remunerate its actors, laying the groundwork for the next season will take money. Conroy has been putting his past experience to work and retooling the theater's donation program as well as augmenting its marketing channels. Both the newsletter and the social media pages have been revamped.

"We've been blessed with many patrons still supporting the Coeur d'Alene Summer Theatre because it's their passion and they understand that the arts are an integral part of the fiber of a community."

Provided that the spread of COVID-19 is kept in check and the Summer Theatre is able to return to full production next year as planned, Conroy says that his organization, like many regional theaters, will emerge from the forced hiatus wiser, more organized and re-energized.