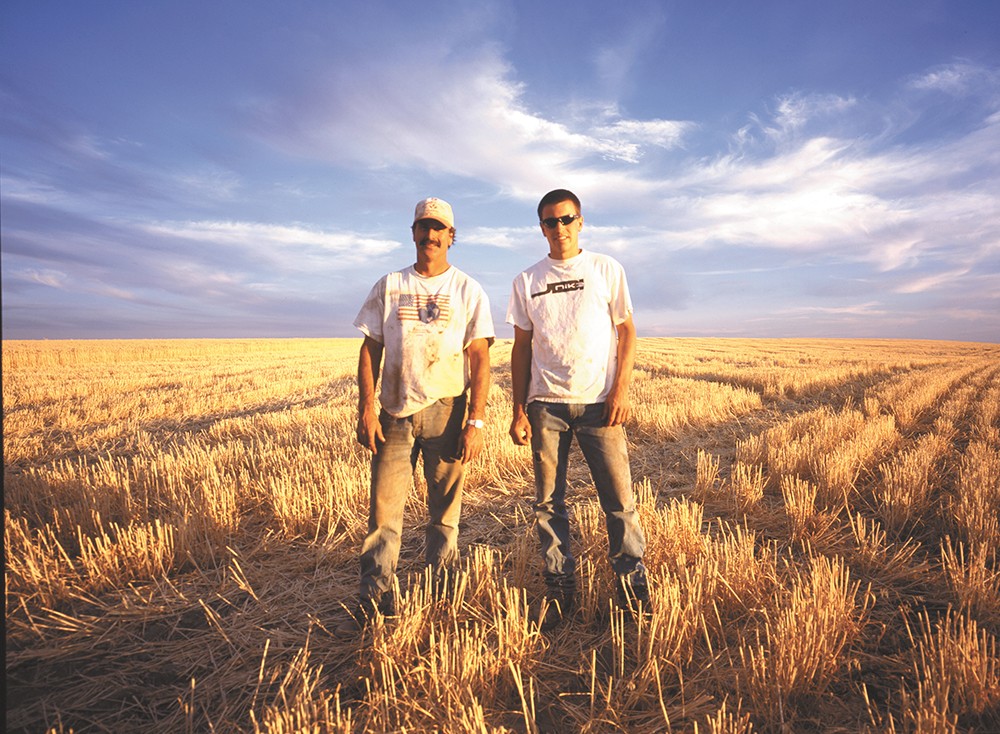 The movie that eventually became Dryland

would never have happened if Portland filmmakers Sue Arbuthnot and Richard Wilhelm had flown to Coeur d'Alene on a long-ago trip instead of driving.

Cruising Highway 395 toward Ritzville, they saw a "colorful, quirky" sign beckoning people to Lind's Combine Demolition Derby and Rodeo. "It was irresistible," Arbuthnot recalls. "We didn't know what it meant, but it said drop in, so we did."

That decision would lead them to spend more than a decade visiting Lind, getting to know the town's people and their stories. Yes, they learned about the famous combine demo derby, where drivers crash souped-up tractors into each other; it's Lind's most significant civic fundraiser, drawing tourists to what Arbuthnot calls "sort of a barn-raising feat of self-reliance."

In researching what they thought would be a 10-minute short film about an unusual extreme sport, they uncovered the story of two then-teenage best friends — Josh Knodel and Matt Miller — for whom the derby was the culmination of adolescent dreams, and whose families are representative of the trials of modern farming. The filmmakers met the boys the first time they visited, at a derby organizing meeting, and ended up tracking their lives for the next 10 years.

"We sat down with them, literally within an hour we were filming," Arbuthnot says. "We were so fortunate to meet these two young men. They epitomized the sense of attachment to place, the sense of history. They both had an equally strong passion to stay on their family farms and carry the legacy forward."

Dryland explores both boys' efforts to follow their fathers' derby successes, showing their efforts to fire up their combine named "JAWS" year after year as a parallel to the farming community's devotion to a way of life constantly challenged by market prices, weather whims and the growth of factory farming.

As the filmmakers returned to Lind for derby after derby, and tracked both boys through their high school graduations and other life-altering events, the way the farmers keep their eye on the long view seeped into the way they worked on their film.

"That is exactly what we learned from the farmers," Arbuthnot said. "An attitude or approach to life that seems to be a good way, whether it's a documentary or farming. It was important for us to have a long view for what their lives were like, and because it was more accurate to the pacing and tempo of a life in agriculture. You don't just look at a crop one year, or a weather pattern, or a fire. There can be lots of serious events that can hold you back, but it's certainly a long-term venture."

The approach paid off for Arbuthnot and Wilhelm. Dryland is an inviting look at a lifestyle that is not known by many Americans, and is threatened by extinction despite the best efforts of families like Josh's and Matt's. There is stunning photography of Washington's wheat country, and an original score by Mark Orton, who did the music for the film Nebraska.

Eight of the cast members will be on hand at the SpIFF screening, and Spokane will be one of the few urban screenings of the movie to date. Arbuthnot relishes bringing the people of Lind to city audiences, on screen and in person, as a way to bring different types of people together to find solutions to the challenges of modern agriculture.

"Film has an opportunity to be the catalyst in those discussions," Arbuthnot says. "It's a gift for us to be able to do that." ♦