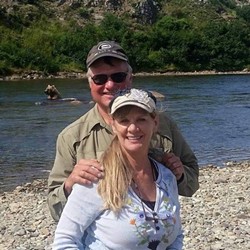 Larry Isenberg's system contained lethal levels of the drug diphenhydramine, an antihistamine commonly sold under the brand name Benadryl, when his body was recovered from Lake Coeur d'Alene this past March, according to a warrant filed recently in Spokane County.

Spokane County Sheriff's Detective Kirk Keyser cites a report from Kootenai County Coroner Dr. Warren Keene, which says that Isenberg's body contained 7,100 nanograms of the drug. Therapeutic levels are around 100 to 1,000 nanograms, according to the warrant.

The presence of the drug, as well as other details contained in the warrant, describe Isenberg's lifestyle and conversations leading up to his death. Those descriptions seem to contradict previous statements from his wife, Lori Isenberg, who told police that he fell overboard while trying to fix their boat's motor during an early morning boat ride in February.

Lori Isenberg
Lori Isenberg is believed to be the last person to see her husband alive and is currently charged with embezzling about half a million dollars from the North Idaho Housing Coalition. She has been on the lam since May 25. There is a $500,000 warrant for her arrest in Kootenai County.

Spokane County Detective Keyser's warrant cites information from Kootenai County Detective Kirk Kelso, laying out a case against Lori Isenberg, who is described by a close friend as a "Mama Bear," when it came to her daughters.
Spokane County Medical Examiner Sally Aiken found no evidence of a stroke, and detectives' analysis of Larry and Lori Isenberg's text messaging styles show that Larry never used emojis, while Lori used them frequently.

Marlow, the neighbor, who is also a surgical nurse, also told police that Larry Isenberg was "very very" diligent about his health and would have gone to a doctor, urgent care or asked her about the alleged "mini stroke."
The Kootenai County Coroner's report lists both the cause and manner of Larry Isenberg's death as "undetermined."