The outdoors can be a bit hard to tame — but for restoration ecologist Joe Cannon, that's part of why it's worth preserving 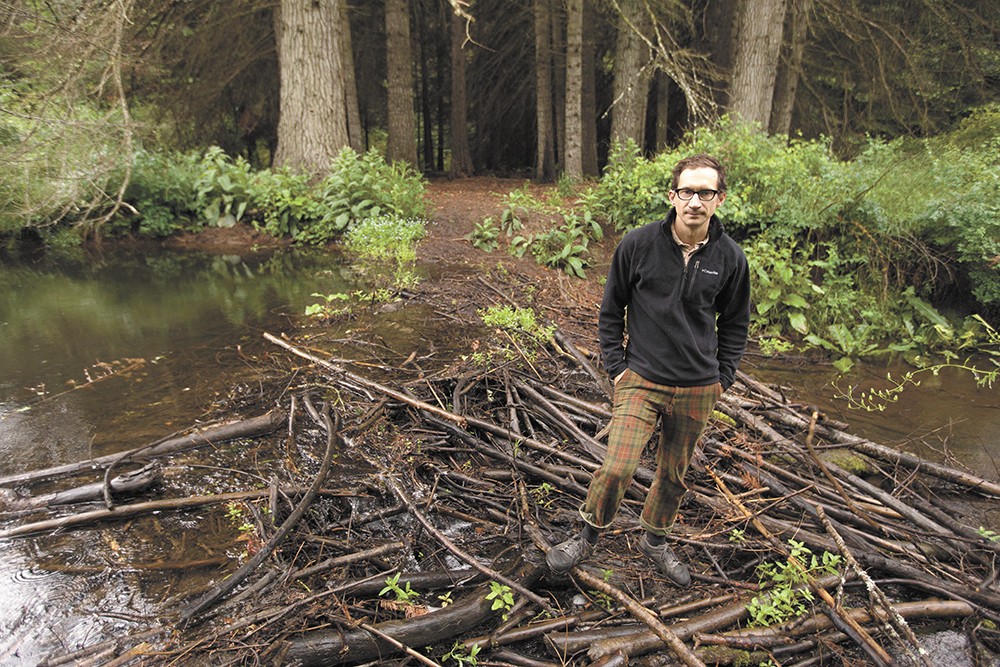 Even if you don't go to nature, sometimes nature comes to you. It's a lesson some unlucky homesteaders in Chattaroy, 18 miles north of Spokane, learned a couple of months ago as water started flooding into their basement.

The culprit? A beaver dam that had redirected a nearby stream into their house.

That's where Joe Cannon, restoration ecologist for the Lands Council's beaver program, comes in. It's his job to be an advocate, of sorts, for beavers — to show that, as irritating and destructive as nature can be, it's worth protecting.

When beavers chew up a farmer's orchard trees or wreak havoc on local infrastructure, Cannon meets with the landowners to try to find a solution. That may mean wrapping fencing around certain trees or running pipes through the beaver dam in order to shift the flow of a river.

About a third of the time, when beavers are too much of a nuisance, he traps them, brings them home and keeps them in his backyard, until he can trap the rest of the family. Then he and other volunteers transfer the whole beaver clan up to the Colville National Forest.

Ideally, though, his advocacy pays off. He's able to convince the farmers and homeowners that beavers play a starring role in the local ecology. "These conversations are really important to have when someone is losing thousands of dollars in property," Cannon says.

A life spent studying ecology and botany means he's able to look out on a sweeping vista and see more than just a postcard. He sees how an entire ecology snaps together like puzzle pieces. Take away a piece, and the hole hurts the whole.

"Even if you're trying to just heavy-handedly dominate the land," Cannon says, conservation has an impact on everyone. Weather, food, recreation and transportation — all are impacted by environmental conditions a thousand feet above and ecological systems a thousand miles away.

"To not pay attention to that, you'll cut your feet out from under you," Cannon says.

Yes, the beaver is disruptive. But that's why it's valuable. It dams rivers, redirects streams, digs side channels, fells old trees. A little gnawing, and — timber! — it has altered nature's rhythm.

"They add fish habitat, they add fish streams, cover for fish and perches for birds to hunt," Cannon says. "When they're taking down cottonwoods and aspens, a small forest comes up from the roots." As beavers paw at the sediment that collects at the back of their dams, they're spreading seeds.

Forests and wetlands are rejuvenated through change — through major floods, powerful winds and raging wildfires. Humanity's negative impact on nature isn't just about eating up habitat, polluting streams or driving up the Earth's temperature a few degrees. It's about the attempt to tame the untamed, and sapping it of its vitality in the process.

By contrast, Cannon continues to love the surprising unpredictability of nature. "What am I going to see now? A piece of a flying squirrel that was eaten overnight by something?" Cannon says he thinks as he embarks on hikes. "Feeding zones and plants I've never seen?"

Yes, nature can be annoying and dangerous. Cannon grew up fishing in stormy seas with his dad, the boat nearly toppling in shark-infested waters. He grew up exploring Florida swamps, trudging waist-deep through mucky water buzzing with bugs, venomous snakes and alligators. He's visited Chitwan National Park in Nepal, as the government tried to restore the black rhino and tiger population.

"We had to run from a charging rhino," Cannon says. "I got a really blurry photo."

That's the exciting thing about getting out in nature. It's untamed. It bites back. To Cannon, the messy parts of our world are worth preserving precisely because they're messy.

"That's intrigue," Cannon says. "That's part of the vitality of life — having risk. You have stories to tell. Ultimately, stories are a huge part of validating who you are. Your experience. Your almost-death experience."♦