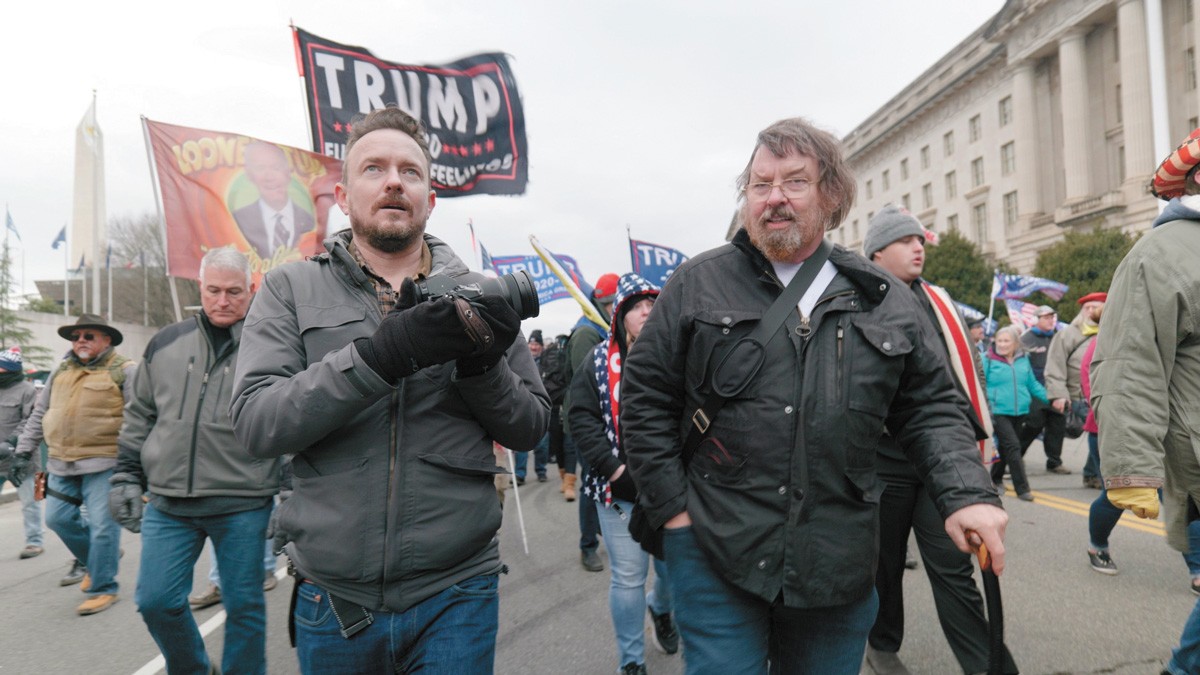 INTO THE STUPID
It took a minute to warm to the idea of watching Q: Into the Storm, a six-part HBO documentary about QAnon, the conspiracy theory whose followers largely believe Donald Trump is the world's savior and Tom Hanks wants to eat babies. But filmmaker Cullen Hoback manages to deliver a series that's particularly strong in showing how QAnon flourishes in corners of the internet most of us will never visit. While there's some fun in guessing who the mysterious "Q" might be, learning about the father/son team of website developers Jim and Ron Watkins, hosts of all manner of unbalanced (and largely appalling) web denizens under the guise of being "free speech" advocates, is more interesting. You'll spend much of the six hours shaking your head in disbelief, and finish the series scared there are actually Q believers in Congress. (DAN NAILEN)

REFRESH FEED
Reading Patricia Lockwood's novel No One Is Talking About This is like scrolling through a social media feed, a stream-of-consciousness string of witty observations, crass jokes and lyrical poems that reflects the experience of being "extremely online." Planting us in the head of a 30-something woman who has become a minor internet celebrity, the book eventually reveals a plot that concerns a baby born with a rare disorder, birth control legislation in Ohio and (I think) the impending apocalypse. Lockwood, a poet and internet scholar, is examining humanity by way of its memes, creating a weird, funny, sad, timely and hard-to-describe satire with shades of Don DeLillo and Joan Didion. (NATHAN WEINBENDER)

LEADING BY EXAMPLE
You've binged the DC and Marvel shows out there, but are you ready for a superhero story you maybe haven't heard before? Based on a series by Image (the third-largest comic book company), Netflix's show Jupiter's Legacy weaves together the Depression-era origin story of this universe's first generation of American superheroes, and the modern day struggles of their adult children who are set to take over. From drug addiction to moral dilemmas about when and whether to kill, the show touches on deep topics while offering comic relief amid the turmoil. (SAMANTHA WOHLFEIL)

DEFYING GRAVITY
Matthias Giraud is a full-time daredevil, a BASE jumper who's always searching for new heights. He's the subject of the documentary Super Frenchie, directed by Spokane filmmaker Chase Ogden and made in piecemeal fashion over the course of a decade. Like the Oscar-winning Free Solo, Super Frenchie features plenty of eye-popping, pulse-quickening footage of amazing stunts, but at its core is the story of a death-defying adventurer getting older and reconsidering his priorities. The film has played at several festivals, including the 2020 Spokane International Film Festival, and it's opening at the Magic Lantern Theater June 4. (NATHAN WEINBENDER)

CROWDED HOUSE, Dreamers Are Waiting. This long-running crew is always good for some pop-rock perfection.