SHADLE'S NEW LOOK
After closing for two years to undergo a major renovation that nearly doubled the size of Spokane Public Library's second-busiest branch, the Shadle Library reopened this week. Upgrades to the branch, part of a $77 million voter-approved bond, include lots of free meeting space, a kids' play area, kitchen for classes and events, "discovery" garden, drive-thru book drop, quiet reading room, and more. Next up for remodel is the Indian Trail Library, now closed until mid-2022. Meanwhile, the downtown branch — renamed the Central Library — is expected to reopen in spring 2022. SPL also recently rolled out a newly redesigned website at spokanelibrary.org; updates on all bond-funded projects are at future.spokanelibrary.org. (CHEY SCOTT)

BLUE NOTES
During last year's election, Jason Isbell tweeted that he'd record a covers album of Georgia artists if the state went blue for Joe Biden, and he kept his word with Georgia Blue, a 13-song set that feels anything but tossed off on a whim. It starts and ends with R.E.M. tunes ("Nightswimming" and "Driver 8"), includes guest appearances by both hot newcomers (Brittney Spencer, Adia Victoria) and established stars (Brandi Carlile, Bela Fleck), and delivers some serious highlights as Isbell tackles Otis Redding ("I've Been Loving You Too Long") and the Black Crowes ("Sometimes Salvation"). Best of all, proceeds from the album, available now digitally and soon on CD and LP, go to voting-rights groups in Georgia. (DAN NAILEN) 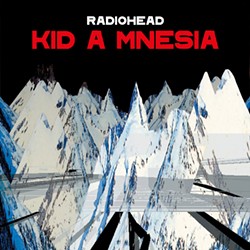 RADIOHEAD, Kid A Mnesia. While its core might be reissues of Kid A and Amnesiac, the real draw here is a third disc featuring unreleased material from the albums' recording sessions.

ABBA, Voyage. On their first new album in 40 (!!!) years, ABBA sounds remarkably unchanged. Must be something in that Swedish water.