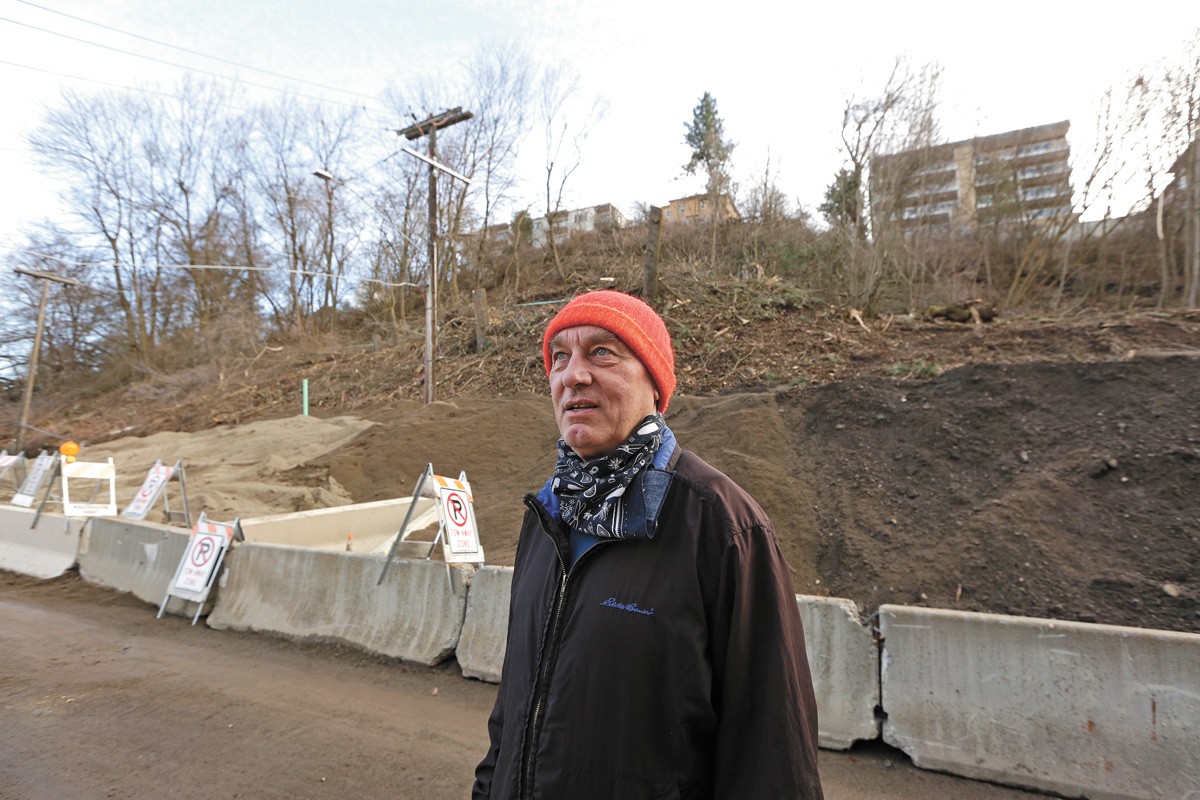 Compared to the massive windstorms three weeks earlier, the weather on the night of Jan. 29 was peaceful. No gale-force winds, no huge rainstorms, no lightning, no snow. And the entire Browne's Addition Neighborhood had plunged into darkness.

The power outage stretched north from Browne's Addition, through Peaceful Valley and West Central across the river, shutting off the electricity to homes as far north as Francis Avenue.

The top of the utility pole at Browne's Addition Buckman Apartments had snapped clean off, the crossbar dangling freely and the transformer hanging nearly parallel with the driveway.

Spokane Fire Chief Brian Schaeffer drives down Riverside, into the Peaceful Valley neighborhood, until he arrives at the problem: A ponderosa pine that had been perched precariously on the steep slope above Peaceful Valley had become uprooted, taking out a high tensile electric line and shutting off power for over 8,000 households.

On the one hand, compared to January's windstorms that cut power to 100,000 residents and killed a woman, a single tree falling doesn't seem noteworthy. But the problem in Peaceful Valley goes deeper — literally.

Days before the tree fell, city spokeswoman Marlene Feist says, a wastewater worker was "was doing a little shoveling around city properties there and noticed that something was happening on that hillside."

The hill itself seemed to be shifting. The city closed the street, planning on taking down the teetering tree, but it toppled on its own before the city could remove it.

The next week, the city measured 3 inches of downward movement in 48 hours. While a cold snap froze the movement temporarily, the retaining wall on the slope of Clarke Avenue in Peaceful Valley began to buckle and bulge, with one part of the wall being pushed a full foot to the west.

"It was kind of zippering out, bursting at the seams," says Lesley Quick, Peaceful Valley Neighborhood Council chair.

Other trees and power poles were falling as well.

By Feb. 18, Mayor Nadine Woodward issued an emergency declaration. The city responded by marshaling an arsenal of drills, dirt and geological analysis, setting into motion an intervention plan that could end up costing as much as $1 million.

But this isn't a new problem for Peaceful Valley — it's a very old one, one embedded into the soil of the neighborhood itself: For over a century, Peaceful Valley has had to reckon with the threat of landslides. So while Quick credits the city for its swift, all-hands-on-deck response, she suggests the challenge the engineers face is a particularly steep one.

"Is it a story about a city growing up around something before they realize what they've built on top of it?" Quick says. "It's a 100-year-old problem."

It was November 1918. The city of Spokane was battling a deadly global pandemic. And after five years of construction work, Peaceful Valley resident William C. Moore had just put the finishing touches on his new home at 1807 W. Clarke Ave., at almost exactly the same spot as the most recent landslide.


But then the ground gave way. The entire hill, soaked with water, began to slide down. It took out two of his neighbor Ernest Hess' sheds, and knocked out the bottom story of Moore's house at a 45-degree angle.

"Ominous groanings and creakings are continuous from the house," the Spokesman-Review reported.

Three days later, the hill had slid another 18 inches. Dirt spilled into Clarke Avenue, and Moore's house jutted 2 feet over the retaining wall. It was a total loss — firefighters had to dismantle his home.

And it wasn't even the first time this had happened. Hess had sued the city a decade earlier, after a torrent of water caused a landslide to dump "five or six carloads" of gravel and mud into his home, filling it nearly up to the rafters. Hess blamed an inadequate city sewer system.

A broken sewer line was the theory behind the landslide that destroyed Moore's house 10 years later. But when the city inspected it, they found everything in the sewer was working properly. A city engineer pointed to another possible culprit: The area was full of underground springs that soaked the soil and hastened landslides.

The topography of Peaceful Valley itself makes it vulnerable to disaster, says longtime Peaceful Valley resident Charlie Greenwood: The south, west and east all slope down toward the neighborhood.

He was a 7-year-old in 1957 when a torrential storm caused a part of the ridge at Riverside and Cedar to collapse, breaking open a sewer system, and sending a wave of earth and water surging through Peaceful Valley.

"Suddenly the mud and water burst through the kitchen window, and my mother takes me and my brother down the driveway, through 6-8 inches of running water," he recalls. "My dad tried to save the house, but that proved to be a futile effort. He broke a shovel in doing so."

As sewer and drainage systems have grown more sophisticated, the neighborhood has been spared major floods or landslides.

But two years ago, during a spring rainstorm that turned some of the neighborhood's streets into shallow lakes, the Inlander photographed a mudslide stretching from the Peaceful Valley hillside into Clarke Avenue.

"There were certainly things that gave indications of geostructural changes," says Quick. For years, she says, neighbors could see a little trickle of water leaking through the retaining wall at Clarke.

Today, that wall is ready to burst.


"The landslide itself is putting so much pressure on the wall that it is unlikely to stand on its own," says Kyle Twohig, the city's director of engineering services.

To prevent the wall's failure, the city stacked up a mountain of dirt — 1,200 yards worth — and pressed it against the retaining wall. More recently, thanks to extra funding freed up by the emergency declaration, they added concrete Jersey barriers.

Schaeffer says that as best as the fire department can tell, the slide was the result of moisture from a very rainy January, the earlier windstorm and other cumulative shifts in recent years.

"The more that we have these influences on our topography, whether wildfires or climate events or harsh weather on existing hillsides, erosion will occur faster," Schaeffer says.

Right now, Twohig says, the city has a working theory for what the issue is with the hillside. Roughly, the hillside has three layers: At the surface, there's rich soil and vegetation. Underneath that, there's a layer of gravel and, underneath that, a layer of clay. When there's a big rainstorm, the clay stops the hillside from draining, the gravel soaks up water and turns into the geological equivalent of lubricated ball bearings, allowing the trees on the surface to slide downward on the steep slope.

But, he says, figuring out exactly what's happening has meant sufficiently stabilizing the hillside to bring up drilling equipment, dig in and install underground inclinometers so "we can see exactly where the ground is moving and at what layers."

The city estimates that geotechnical analysis of the soil and groundwater could cost around $100,000, while designing a solution may cost up to $150,000.

One potential solution could be a brand new wall, reinforced with anchors, which could cost upward of $800,000. Avista, for its part, is planning on permanently shifting their powerlines off the hillside to make room for potential developments.

But Quick is confident that Peaceful Valley can weather anything that's ahead. After all, she says, the neighborhood started when lumbermen and railroad workers first built there without permission, and it's survived floods and landslides in the century since.

"We still have a lot of the same spirit down here," Quick says. "You make do with what you have and you make the best of it." ♦