Get Lit! 2017: Local restaurants pay homage to this year's authors through special cocktails and appetizers 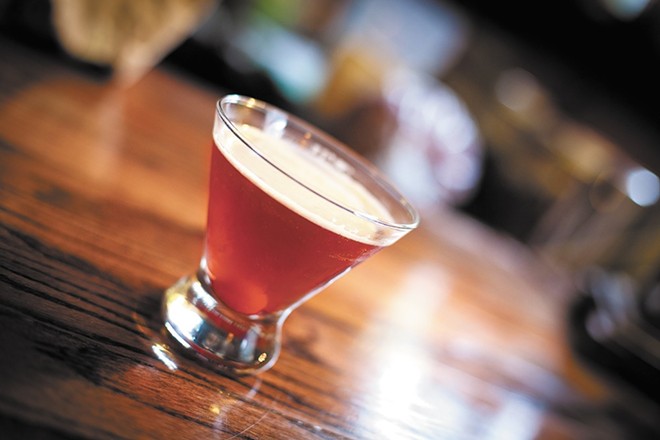 Local restaurants and bars are crafting author-inspired bites and drinks to benefit the Get Lit! Festival.

Since the beginning of time, getting "lit" has served as both a salve and a muse

for creatives of all stripes. And of all the libations inspired or favored by literature's greatest names, perhaps the most familiar is the Hemingway daiquiri, a concoction of rum, citrus juice, Maraschino liqueur and a couple of pinches of sugar. The robust novelist was known to favor many other concoctions, and didn't discriminate regarding the types of alcohol he imbibed.

It's fitting, then, that this year's Get Lit! is offering a new literature-plus-booze showcase in the form of original cocktails and small plates inspired by some of this year's participating authors and their respective works.

Kicking off the seven-day "Inspired" special is a happy hour event at the Wandering Table on April 17 showcasing appetizers and drinks inspired by the writings of several festival authors.

Wandering Table owner and Chef Adam Hegsted says there was no hesitation that his collection of downtown Spokane restaurants, including the Gilded Unicorn and Yards Bruncheon, would participate in the partnership, which supports Get Lit! through a $1 donation from every Inspired special sold.

"It's something that we always try and take part in, because we believe in all the arts and the movement that's happening now," Hegsted says. "It's so fantastic, in the past five to 10 years the progress we've made in literature, visual arts, culinary arts and everything."

it was almost an automatic choice to create cocktails inspired by two local writers who've frequented the longtime eatery to pen their respective literary pursuits.

Throughout the festival — and maybe longer, if the drinks turn out to be popular — Lindaman's is offering cocktails that pay homage to author Rachel Toor and poet Christopher Howell.

The poet Howell proved to be a bit more challenging.

"He is so esoteric and I love his poetry, so I gave his book to bartender [Molly Hart] and she decided that because it had animal imagery and was about love, that the drink would be called 'The Birds and the Bees,'" Lindaman says.

"We're very attached to the two of them and their work," Lindaman summarizes. "This is an easy way for me to honor them, because they're such amazing writers." ♦