review of *The Cemetery Club*

at the Civic's Studio Theatre through Nov. 14
As a script, The Cemetery Club has some weaknesses. The three main characters are almost (not quite) reducible to types. It's not hard to predict one of the main plot developments, and you can just tell which debates will transpire and which characters will be on which side. The ending leans toward the maudlin.
After reading it, Bobo was expecting an episode the The Golden Girls, just focused more firmly on death (but with the character types and one-liner rimshots pretty much intact). 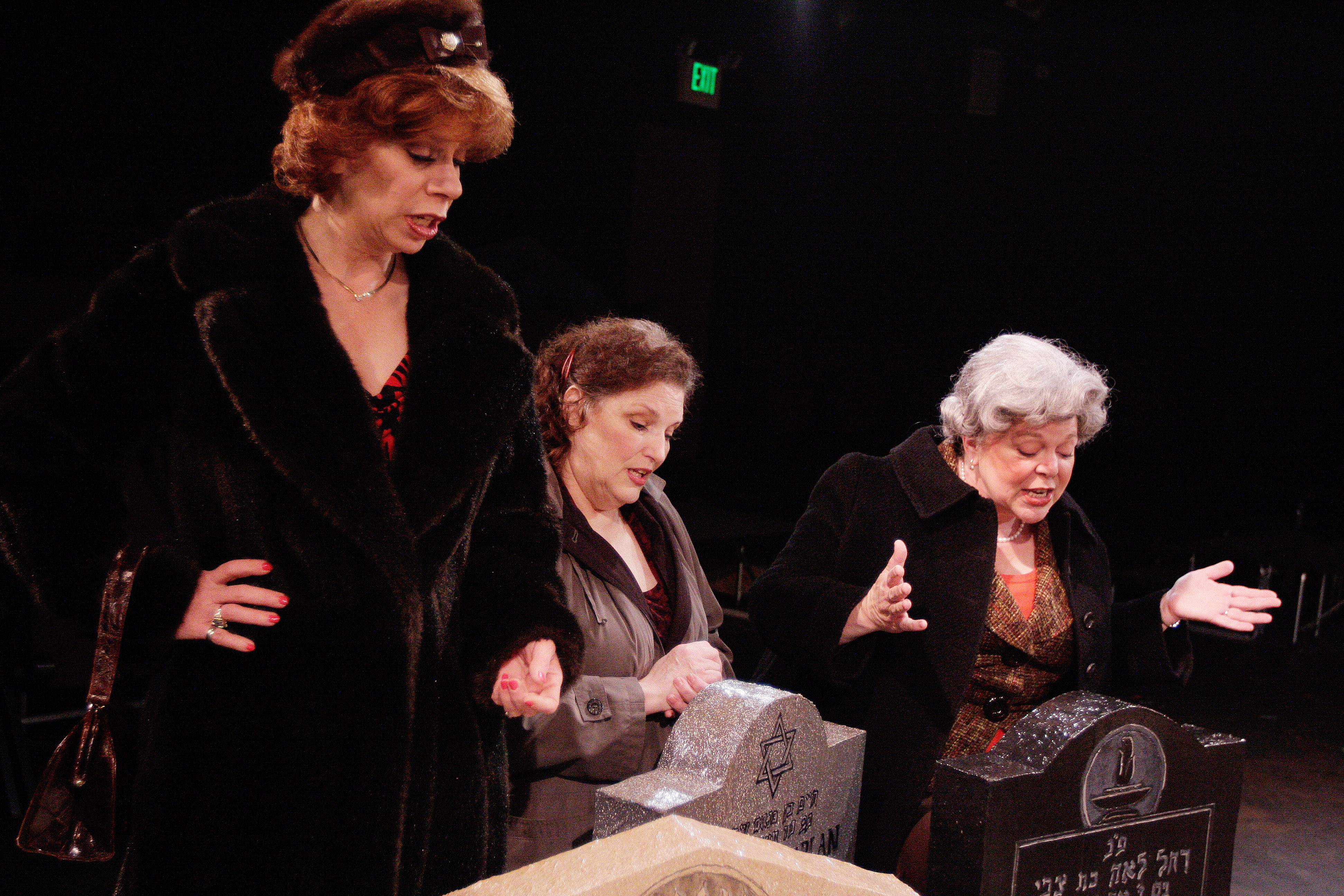 The fact that Cemetery Club reaches past that level is due to a couple of factors: the immediacy of live theater, and the talents of this production's three merry widows: Melody Deatherage, Mary Starkey and Susan Hardie.
At one point, Tom Heppler (as the eligible widower who is the cynosure of every widow in Ivan Menchell's play) is making small talk in the living room of one of the widows. He gestures toward a pipe rack — anything to make small talk — and mutters something about how he didn't know that her deceased husband was a smoker. On the page, it's just a stage direction; but in Heppler and Deatherage's hands, it becomes a moment. The pipes are all that remain of Murray; both onstage characters, in their different ways, acknowledge the loss. A lot is left unspoken, and is all the more powerful for that — powerful, because the audience has to process the significance for themselves. A prop that we'd overlooked becomes the focus of grief, and Heppler, Deatherage, and director Heather McHenry-Kroetch — all three — handled the moment with subtlety.
Or the second scene: Each widow talking to her husband's gravestone. On the page, except for some cross-cut conversation, it seemed straightforward. But in live performance — Bobo's only stating the obvious here — you're in the same room as three grieving women, and the emotional impact multiplies. And yet another advantage: the three gravestones remain rooted just outside the realistic living-room set. Unlike the reading experience, when you watch the Club members in action, the sense of death and dying is never far away.
Hardie has the scene-stealing role — the flirty, embittered one — and she duly steals scenes ... but not without also finding the serious side of come-hither-and-let's-have-some-fun widow on the prowl. Some of Hardie's second-act revelations were just as impressive, in their way, as her earlier flouncing and flamboyance as some kind of Jewish Dolly Parton. She acts like she owns the joint; then, when the insecurities peep through, Hardie makes them convincing too. It's a powerful performance, unlike most of Hardie's other roles, and she becomes the center of attention (when appropriate) in most of what she does.
Starkey slits her eyes in disapproval throughout — but whereas it's in genuine disapproval early on, she finds the comedy in being a killjoy later on. And Deatherage does some of the most subtle acting of her local career with Ida's understated disappointments and small victories. Her reluctance at her husband's grave — clutching her purse, she'd like to move on with her life, but she's afraid of offending him (several years dead now) — is affecting.
Some comic three-way bickering over their ages is nearly as quick and accomplished as a bit of Marx Brothers shtick. The cast is good at doing nervous pauses and making them seem real.
It's the little things that make a staged conversation feel lived-in, and two examples would include the un-commented on business of sugar lumps in Lucille's tea and the matter-of-fact way that she flips (in a gossipy way) through another woman's mail: She's intrusive, and almost aware of how intrusive she is, and yet neither director nor actor are going to make any intrusive comments about it.
There are lots of understated features of this show like that. These women happen to be Jewish; they could be Presbyterian, but they happen to be Jewish. No big deal. It's not their sole, defining characteristic. Stereotypes are hinted at, but not more. Heppler has an amazing moment when he expresses disbelief over the 40 years that passed between kneeling to propose and kneeling by his wife's grave.
McHenry-Kroetch let a couple of scene-endings fall flat, lingering too long, and there are some fixable backs-to-the-audience moments, but generally her directing lets the actors create comfortably.
Menchell wrote a well-made play (the echo, in two different contexts, of "I'll see ya when I see ya" is emotionally effective), and Bobo wishes he could write something just as accomplished. At the same time, The Cemetery Club, while satisfying and funny and sad, never quite rises above the formulaic. It's a lot of widows — pro, con and in the middle on the issue of grieving and moving on — and you can always sense the playwright's hand at work (not just in the witty one-line jokes, but in the play's overall shape). Still, it's a mostly engaging evening, and a very well acted one.

(Bobo had more to say, but he's blathered on long enough, and it's taken him a week to produce this much, and besides, as usual, he can't read most of his notes anyway.)