THIS WEEKEND IN MUSIC: Accused! Festival! The Rapture! 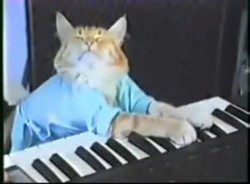 The Rapture II, the Spokane 1980s punk-rock reunion lovefest that started two years ago, resumes tonight. A Club gets taken by storm by the punks of yesteryear: An 425 Pound Yorkshire Sow, Big Yuck Mouth, Social Bondage, Moral Crux, Bonneville Power and Crutchman. Music starts at 8 pm. Pay ten bucks and be 21 by 7 pm to reminisce.

Reunion-goers will be glad to know that the long-anonymous furry rockers, Gorilla & Rabbit, will be joined tonight by "Chicken" at the First Friday art opening at Brews on Washington this evening. Show's free. Carson Liberace and John K open. Revel in their furry goodness at 7:30 pm.

For the second time this summer, lucky for us, longtime Washington metal band, the Accused, comes back to play the Hop! stage this evening. Read our story about the band here, and check them out tonight with some of Spokane's loudest: Rutah, O My Darlin, Rise of the Fallen, Zombie Messiah. Show at 7 pm. All-ages. $15 at the door.

Festival at Sandpoint powers on this weekend, with a show tonight by Spokane-favorite, Brandi Carlile. Check out our round-up of the festival here.

If your mind steers clear of anything related to Phish (who play the Gorge Amphitheater this weekend… wait, didn't they break up?), you'll want to head down to Mootsy's. Wisconsin band, the Fatty Acids, play a bizarro blend of Isaac Hayes and Beck (a la Midnite Vultures) alongside the garage-y New York Rifles (who we wrote about a few months back here). Performances also by locals Belt of Vapor and BBBBandits. $5. Gotta be 21.

For something completely different, the Beach Boys (or some incarnation of it) take the stage tomorrow at the gigantic outdoor theater at Northern Quest Casino. Chubby Checker is playing too. It's sold out so… yeah. Might have to bum rush the guards to get in?

And, it's not specifically music, but there's a lot of riffage in it: SpokAnarchy!, the documentary about the punk scene here in the '80s, debuts tomorrow night at the Garland Theater. Check out our story on the production here, and this week's Q&A with one of the directors here. Plus, Keyboard Cat is in it (pictured here). And, if you didn't know, Bloglander loves cats!!!

SO THAT HAPPENED: Bank of Whitman fails