With nearly 400 different dishes on the collective Spokane Restaurant Week menu, it would take larger stomach (and budget) than we’ve got to try every dish. But we’ve been making lists of dishes that caught our eye, including vegetarian and gluten-free options. 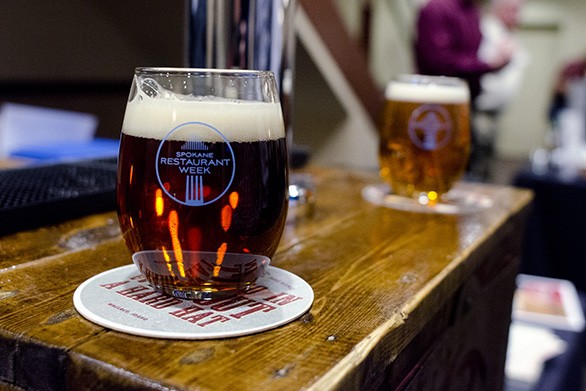 The best way to wash down a nice dinner is with a local beer or wine, and the Drink Local list gives you a nice selection if you don’t know where to begin. (We’ve previously recommended Wallace Brewing and the No-Li Wrecking Ball Imperial Stout, if you come across those.)

At the Post Street Ale House, where a three-sampler flight or pint is on the Spokane Restaurant Week meal as a second course, they've got the Red Light from Wallace Brewing and brand-new IPA from River City Brewing on tap. The District Bar also includes a pint with your meal.

But why confine the alcohol to your glass? Add a little extra with these boozy dishes.

We say: Anything sweet has got to be better with Bailey’s.

2. Whiskey and Shitake Grilled Sirloin at the Steelhead Bar and Grille

We say: No other entree starts with the excellent word “whiskey.” And, with some red wine mentioned in one of the appetizer options and Kahlua in one of the desserts, you can forgo temperance for all three courses.

We say: Way classier, not to mention tastier, than a Jack-n-Coke.

Menu says: Topped with a brandy drizzle and a dab of soft-serve ice cream.

We say: We can almost see Grandma winking in the kitchen.

We say: A few places put a little booze in the dessert, but here they flip the ratio and put a little dessert in the martinis. Genius.

Out for Spokane Restaurant Week: At Casper Fry with George Nethercutt

MORNING BRIEFING: We're No 1! (Actually, I attended Whitworth instead.)