CAT FRIDAY: A round-up of cat news that made headlines this week

Cats rule the Internet; we all know that. But because they do, there's an almost overwhelming amount of cat-related stuff out there, making it easy to miss the latest and breaking cat happenings.

On occasional basis here at Cat Friday/Inlander HQ, we'll catch you up to speed on the latest and greatest cat stories the Internet has produced, so you can keep up on the cat-world news and also have some great conversation-starter material for the weekend.

This week in cats:

Yesterday, the Interwebz' favorite frowny-faced kitty turned one year old! That's right, Grumpy Cat celebrated her first birthday. We're not sure if she actually had any fun wearing a party hat at a jaunty angle over her ear and posing for a ton of photos next to a cake bearing her likeness, but she still looked pretty darn cute doing it. Head to her Facebook page to wish her a belated Happy Bday right meow! 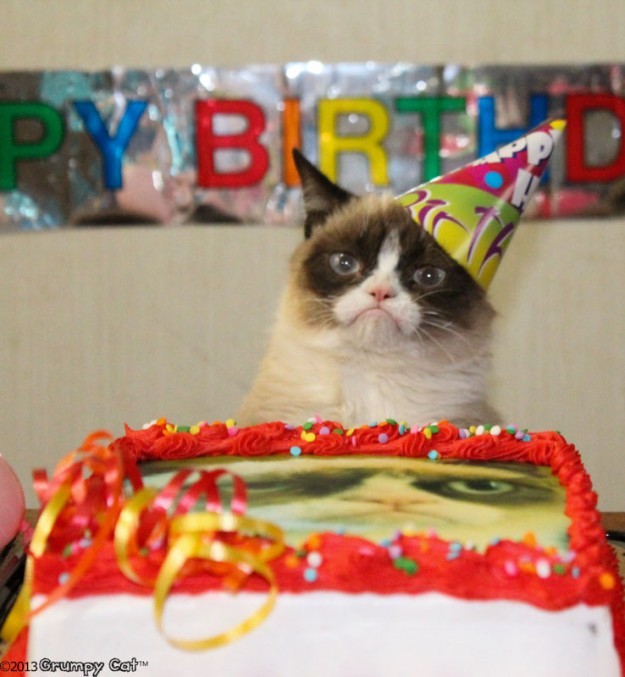 Monday was April Fools' Day, and if you missed any of the super cute kitty-themed pranks that businesses and websites pulled on people, here's a great round-up the folks over at Catsparella created.

Last week we told you about AmazeCats next kitty showdown, the AmazeCats' Next Top Cat contest. The first round went down on Wednesday, and the top four cats who came out on top and now move on to the next round are Little Bear, George the Handsome Deaf and Blind Cat, Sparkle the Designer Cat and Jupiter & Kona. You can still vote for your favorite kitties in the current round of voting, which runs until 2 pm EST tomorrow (Saturday). The top two kitties from each of the two four-cat groups advance to the next round!

We've always been advocates of the many benefits an office kitty can have on productivity and staff morale, and this next story goes to show that kitties can have a similar effect on school kids. Fifteen-year-old Simba, a ginger tabby, has been hanging out with the students at Westbrook High School, in Westbrook, Maine, every day for 12 years now. He shows up each day at 7 am and spends most of his days roaming the halls and occasionally helping students with their assignments. The school district and the students all love Simba, and to show their appreciation for the unofficial feline mascot, are hosting an art show that pays homage to him.

Last but not least, one of the Internet's most beloved kitties, LIL BUB, is now getting some deserved recognition with a feature-length documentary all about her and her famous feline friends. Watch the trailer for Lil Bub and Friendz below, and let's all hope we get a chance to see this sure-to-be epic film.