Cat people generally believe that anything with pointy ears, whiskers, a tail, fur and that utters "meow" is cute, it's just programmed into our brains. At the same time, cat people are fascinated by the fiercest and most majestic big cats: lions, tigers, cheetahs, leopards, jaguars, ocelots, lynx, cougars — the list goes one.

It still astounds me at times, though, to discover yet another species in the feline family that is lesser known but so cute your mind almost explodes. A margay? Oh gawd, make the cuteness stop. A caracal? Total badass ear tufts. A Black-footed cat? Shut up! An oncilla? I can't handle it.

You get the idea. Now let us introduce you to these wild cuties. Just don't get any ideas into your head — wild animals are not pets, at least not these little kitties.

This tiny wild thing lives in the tropical rain forests of Central and South America, and is similar to the margay and the ocelot, but is smaller, weighing between 3 and 6 1/2 lbs. Other names for the oncilla are little spotted cat, tigrillo, cunaguaro or tiger cat. They are currently listed as vulnerable on the conservation status list, which is one degree away from being endangered.

The margay is closely related to the ocelot and the oncilla, but slightly larger than both its relatives, weighing 5.7 to 9 lbs. They're skillful climbers, and spend the majority of their lives in the rainforest trees of southern Mexico and down into northern South America. This wildcat species is listed as near threatened mostly because they're hunted for their fur. (Not cool.)

This next cutie is the cat family's smallest member! They weigh in at a petite 2-3 1/2 lbs. Rusty-spotted cats are only found in India and Sri Lanka, and are listed as vulnerable due to continued habitat loss. 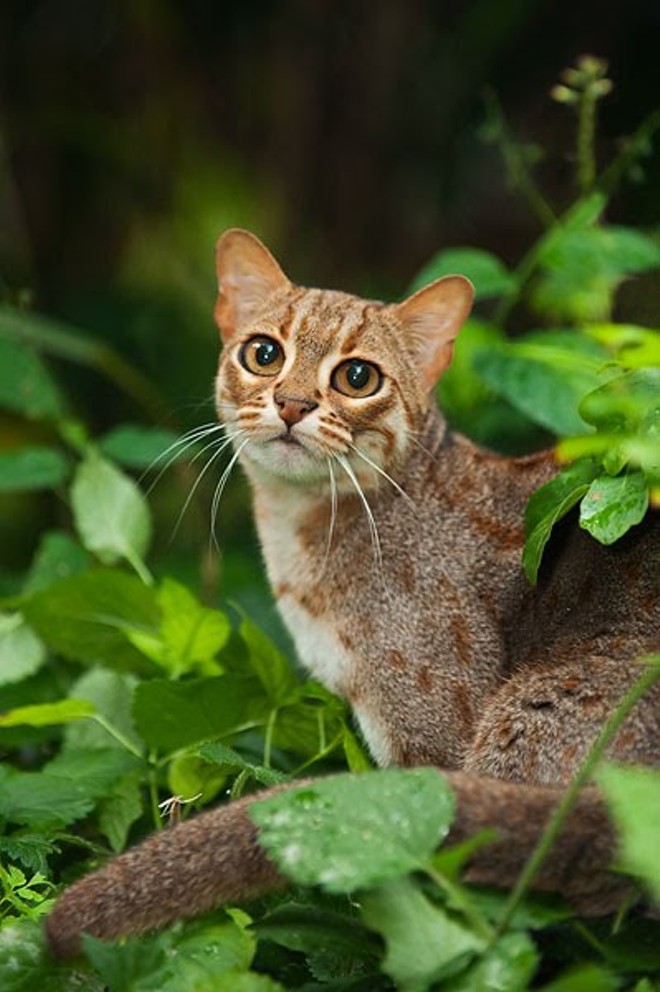 Like its relative the Rusty-spotted cat, this feline is very tiny, and is the smallest of the African cats. It lives mostly in Southern Africa, and is named, clearly, for their black paw pads and feet. Listed as vulnerable, the Black-footed cat weighs between 3 and 5.4 lbs. 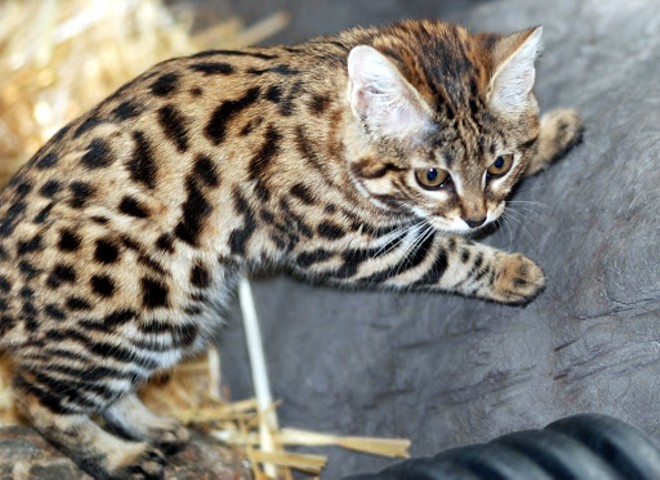 This next species is the only cat that lives in a true desert environment, in North Africa and southwest and central Asia. They're listed as near threatened, and are able to live in the hot desert because of the thick fur protecting their feet and a high tolerance for extreme temperatures. These cats are on the small side, weighing between 3-7 lbs.

Known as the desert lynx, the caracal slightly resembles a cougar, but is distinct with long black tufts of fur extending from its ears. This cat lives mostly in Africa, central Asia and into India. Its conservation status is listed as least concern (phew!). These cats are on the bigger side, weighing between 15-44 lbs.

Last but not least is the lanky, big-earred African serval. Also known as a "tiger bush cat," the serval is closely related to the caracal. These native African cats are the tallest of all cats, and are widely found throughout the continent, south of the Sahara Desert. They're listed under "least concern" for conservation status. The serval is a medium-sized cat, weighing between 15 and 40 lbs.

Clover recognized as one of America's best new cocktail bars