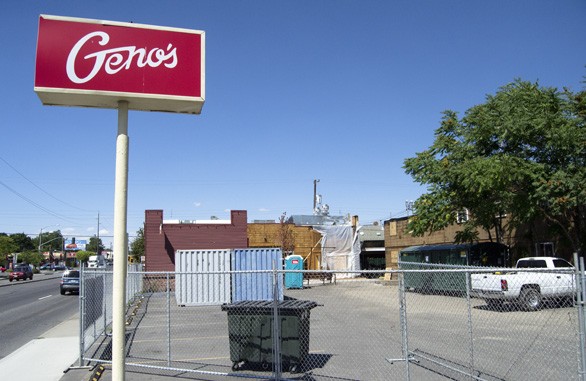 Jacob Jones
Dumpsters and a chain-link fence surround Geno's and the neighboring apartment building, after both were heavily damaged by fire in June.

Just over a month ago, Geno’s closed indefinitely after a devastating fire, leaving regular diners wondering whether the eclectic Logan neighborhood restaurant would be open for business again anytime soon.

Owner and executive chef William Webster initially said the restaurant would reopen after several months. It now appears that Geno’s will reopen, but under new ownership.

Business documents filed this week indicate that a team of owners and managers behind the Elk Public House — Brad Fosseen, John Grollmus, Jeff Meagher and Marshall Powell — are taking over the restaurant as Geno’s Pub.

Their regional restaurant portfolio started with Coeur d’Alene’s Moon Time in 1996, and now includes the Elk Public House and tiny El Que in Browne’s Addition, the Two Seven Public House on the South Hill and The Porch in Hayden Lake. All are known for a low-key neighborhood atmosphere.

Webster took over Geno’s in 2011 after the previous owner shut it down, and it reopened that fall with new decor and positive reviews. (Before that, Webster was behind Zola and Isabella’s on Main Avenue.) The June 15 fire caused an estimated $100,000 in damage to the back side of Geno’s and the neighboring Sinto Apartments, and is being investigated as arson.