Are you looking at the Volume schedule and feeling your eyes start to cross? Yeah, us too. For a little help, we asked some of Spokane’s favorite musicians to send us their dream schedules — some of which are only possible if you have two bodies. Or if you sprint between venues. We suggest sprinting over dismemberment. — Leah Sottile 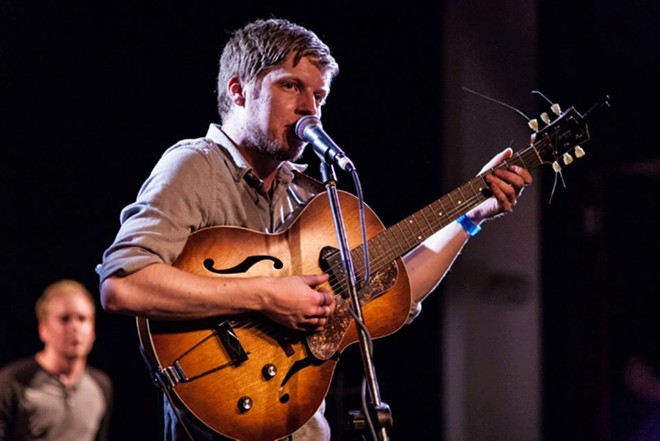 Mike McCall
Performing at Volume in 2013.

6 pm, Irv’s: Silver Treason
Nobody in this town plays country tunes like this lot. Kevin Cameron is a powerhouse of a frontman, and after a long hiatus, they’re likely to be taking some serious names that night.

7 pm, Irv’s: Cedar & Boyer; The Bartlett: Cloud Person
This is a tough one. Cedar & Boyer are incredible. Smooth, intricate folk tunes with a handsome husband-and-wife duo to boot. Some of my favorite people making beautiful music. Cloud Person is a Seattle crew masterminded by Pete Jordan, another great folk songwriter. They make a big sound, and should get all the love Spokane has to muster. I’m personally indebted to both crews, so I’ll let y’all decide.

8 pm, nYne: Water Monster
Strangled Darlings are playing at the same time, and they throw a helluva show. But Water Monster is something brand-new. Not just new for Spokane, but in a more general and epic sort of way. It’s hard to walk off your front porch without stepping on a synth-pop band these days, but Water Monster defies all those stereotypes. Original, pounding, incredibly arranged tunes fronted by Max Harnishfeger, who is a real staple of this scene.

9 pm… I hope you brought those fancy New Balance sneaks, because…
Irv’s: Marshall McLean Band; 9:10 pm, The Bartlett: The Rustics; 9:15 pm, Club 412: Pine League
These bands all play at almost the exact same time. If you haven’t fallen in love with Marshall McLean yet, you probably don’t go out much. He’s the most renowned songwriter to come out of our town, like, ever (winning 2006 Gibson Songwriter of the Year). The Rustics are earthy, catchy, hippie folk that will make you smile. Try being a grouch; I dare you. Their time as one of Spokane’s best is just beginning, and it’s always smart to get in on the ground floor. Finally, Pine League is f—-ing rock music. Tyler Aker, their fearless leader, has enough soul to capture a crowd by his lonesome on a bad day. But throw in members of Diamond Speedboat and The Lion, Oh My! and you’ve got yourself a kickass rock band. This will only be their 4th or 5th show, and the rawness is the cherry on top.

10:50 pm, nYne: The Camaros
You’ll need a break after the 9 o’clock eargasm you just had. Get some food and liquor up for the always-entertaining Camaros. These guys have been around forever, and you won’t hear a bad word about them. That’s incredibly rare. They just make great punk/rock tunes, they play them spot-on, and they don’t give a shit if you like them or not. Because who the f—- are you?! These guys are in my top 10 Spokane bands for sure. Word on the street is that they’ve got a new record coming very soon, and they still don’t give a shit if you buy it. But you will.

11:15 pm, Red Room Lounge: Dead Serious Lovers
This is the best band in Spokane. If you miss this, I will find you.

11 am, Boots Bakery: Tribute to Isamu Jordan
I cant say anything about Som that hasn’t already been said. A pioneer for this town and the scene, a great MC, and an even better friend. He is truly missed, and I won’t miss a chance to let the ether know it.

2 pm, INK Art Space: State of the Scene
We’ve all got our own opinions and thoughts about where we’ve been and where we are. But I want to hear what some of the hardest-working scene builders have to say on the subject. INK is also the newest space on a burgeoning block, so come check it out and maybe throw in your two bits.

6 pm, nYne: Scott Ryan
This guy knows his shit. Perfectly crafted songs, perfectly performed. Rumors of some accompaniment for this one, but it doesn’t matter: this guy shouldn’t be missed.

7 pm, Big Dipper: 66beat
Been a while since I’ve seen these guys. It’s dark, it’s heartfelt, and it’s f—-ing loud. Sounds like a perfect reintroduction to The Dipper.

7:30 pm, Red Room Lounge: Bandit Train
Saw these guys for the first time at the Bartlett recently, and was truly blown away. It’s like if you melted down your original Nintendo and that old M83 record, mixed ’em up, and then printed it on a laserdisc. So why the f—- not (and why the f—- haven’t I tried that?!)

9:20 pm, The Bartlett: Mama Doll
These guys are going to be big. Like, Burt Reynolds big. Dark folk stuff, spot-on harmonies, in a very sexy four-piece package. They’re selling out every room they play, so show up early.

9:50 pm, Club 412 mainstage: Blackwater Prophet; 10 pm, Irv’s: Folkinception; 10:10 pm, The Bartlett: Kithkin
I admit, I haven’t seen Blackwater Prophet live yet, so you’ll see me at this one. However, I have heard the rave reviews. Heavy shit with a tinge of blues and a lot of buzz.

Folkinception, contrarily, I’ve seen, like, 100 times, and I’m not even close to over it. These guys are pure passion and it’s better every single time. It’s country, it’s jam, it’s folk, it’s badass. Buy that record. Kithkin is my very favorite of the current “buzzworthy” Seattle bands. They practically burned Mootsy’s to the ground last time they were here. If you’re looking for the most entertaining live show at Volume, look no further.

11:30 pm, nYne: The Hoot Hoots
Think Blue Album-era Weezer on a Bukowski-level mixture of coke and LSD. Matching costumes, singing about dinosaurs and videogames and, dammit, stealing my little heart. If you know me, I’ve probably told you how much I love this band. And they’ve done Terrible Buttons a lot of favors, so help me pay them back, eh?