CONCERT REVIEW: Dave Rawlings Machine live up to high expectations at the Bing 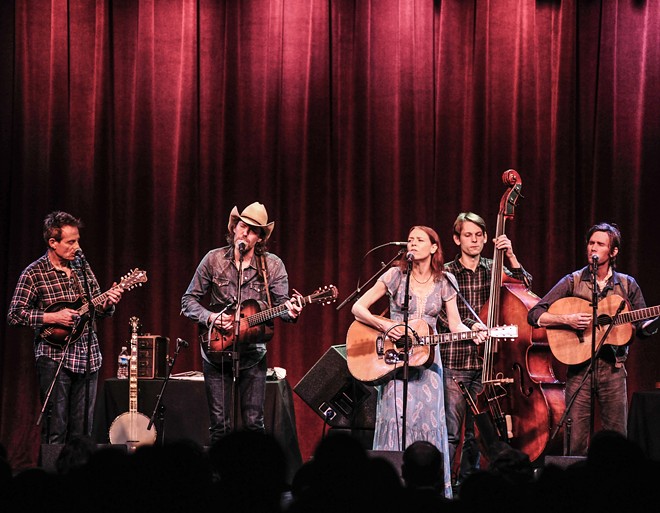 Dave Rawlings and Gillian Welch are songwriting royalty among Americana music fans, with two decades of recordings and tours as a duo — mostly under Welch’s name — helping them build up an incredible amount of good will. Surround them with an amazing band, as happened Tuesday at Spokane’s Bing Crosby Theater, and you have the makings of an unforgettable night.

Rawlings was the ostensible leader of the proceedings, held as they were under the Dave Rawlings Machine moniker. But what happened on stage was close to an old-fashioned hootenanny, with Rawlings regularly asking the others to step up and take over lead vocals or break out an instrumental solo. Welch, naturally, garnered loud hoots from the crowd filling the venue, and guitarist/former Old Crow Medicine Show member Willie Watson had some of the best songs of the night when he took center stage (metaphorically speaking — he stayed at stage-right all night). Even bass player Paul Kowert was offered a few opportunities to take over vocals with his baritone, most notably on the show-closing cover of the Band’s “The Weight.”

The only person on stage who didn’t sing lead at any point was the man whose introduction elicited the loudest roar all night. John Paul Jones, most notably a former member of hard rock pioneers Led Zeppelin, sang plenty of harmonies with the others, while his mandolin solos mesmerized regularly on songs like “To Be Young (is to Be Sad, is to Be High)” and a scorching cover of Bob Dylan’s “Queen Jane Approximately” late in the show; he and Rawlings traded rapid-fire licks throughout that one, with Rawlings even looping in a few bars of the Allman Brothers’ “Midnight Rider” along the way.

In a show full of highlights, it’s hard to pick out favorite moments. The obvious joy on display, led by Rawlings and his huge grin and self-deprecating between-song banter, was infectious. It’s hard for me to remember seeing a band smile so much during a show. The crowd regularly burst into applause at particularly strong instrumental passages, even mid-song, and every break between tunes was met with whoops and hollers.

Rawlings kicked off the proceedings with “The Monkey and the Engineer,” a Jesse Fuller tune the Grateful Dead was fond of, followed by an as-yet-recorded tune, “Candy.” Watson took over for an old-time mountain song, “Dry Bones,” before Welch took lead for the first time on a harmonica-driven “Wayside Back in Time” from her Soul Journey album.

Next came a transcendent run of songs highlighted by the Machine’s first-ever performance, according to Rawlings' introduction, of Bob Dylan’s “As I Went Out One Morning,” the aforementioned “To Be Young (is to Be Sad, is to Be High),” which Rawlings wrote with Ryan Adams, and Watson’s take on “Keep It Clean.” From that point on, the crowd was fully engaged, clapping and stomping along with the fast tunes, falling silent during the ballads.

The band took a break mid-show, and the crowd serenaded Watson with “Happy Birthday” after intermission before Rawlings led his Machine through a second set full of winning performances. Rawlings’ own “Ruby” featured some stunning four-part harmonies between him, Welch, Jones and Watson. Welch led the way through “Will the Circle Be Unbroken” before a raucous rip through bluegrass spiritual “He Will Set Your Fields on Fire” — the picking got so fast Welch exclaimed at its conclusion, “I think my pick is smaller now!”

The latter stages of the show were heavy on cover songs. “I Hear Them All,” a song Rawlings co-wrote with Old Crow Medicine Show, was mashed up with a stirring “This Land is Your Land.” The epic combination of Bright Eyes’ “Method Acting” and Neil Young’s “Cortez the Killer” stretched a good 10 minutes, and I would have happily taken more.

Dylan’s “Queen Jane Approximately” closed down the second set, leading to a thrilling encore of Led Zeppelin’s “Going to California,” Jones’ mandolin leading the way while Rawlings tackled vocals. Welch’s “Miss Ohio” satisfied a woman who’d been shouting for it all night before the band closed it down with “The Weight,” a song that’s probably been covered a few too many times, but never by any group of musicians more skilled than the Dave Rawlings Machine.

Here's a little something of what they sounded like, from the Dave Rawlings Machine website, filmed last year before a show in Georgia: