Young Kwak
Ben Joyce at work in his Spokane studio.
You might remember Spokane artist Ben Joyce from the cover story we did about his unique "Abstract Topophilia" painting style and his growing popularity in the Inland Northwest and beyond. Or perhaps you know him simply through his seemingly ubiquitous work that can be found in the Spokane Convention Center, on the Gonzaga campus in the business building and in homes and businesses throughout the area.

Thanks to appearances at art festivals all over the country, Joyce's work has found its way into a lot of places he never would have imagined when he got started as an artist. And now he has a new fan after rapper The Game encountered some of Joyce's work in the studio for Los Angeles radio station Power 106, where Joyce's childhood best friend, Vinrican, works as a producer.

The Game, a Compton native who made his name on a throwback style reminiscent of classic gangsta rap, fell for one of Joyce's San Francisco pieces (pictured), and contracted with him to do a piece of his old Compton/South LA stomping grounds. Here's the photo Vinrican sent to Joyce: 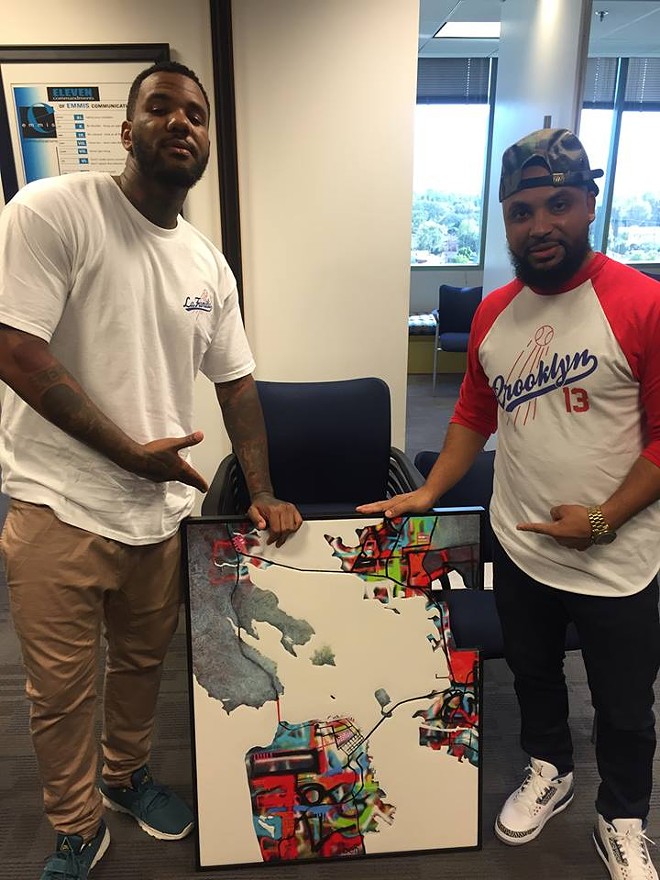 Ben Joyce
The Game, left, checking out one of Joyce's San Francisco paintings, along with Joyce's friend Vinrican.
Joyce says his buddy has several of his pieces dotting the Power 106 studios, and has sent along several photos of hip-hop royalty doing interviews and on-air appearances right in front of his work. He'll be posting some of those to his Facebook page down the line.

As an artist, Joyce says it's really cool that his work can be appreciated by someone like John Travolta and someone like The Game, who grew up in gangs. "They're completely different, but they both connect with it," Joyce says.