The week ahead has some excellent entertainment options, so let's take a look at some of the highlights. You can always peruse our event listings and Staff Picks to find something great to do. Here's what I found for the week ahead:

VISUAL ARTS | Take a little trip back in time with a special photo exhibit opening Monday and running just through this week, taking a look at the development of Ft. George Wright, courtesy of the Mukogawa Ft. Wright Institute.

WORDS/FILM | Ron Hansen, award-winning author of the National Book Award for Fiction (among others), stops by Whitworth's Robinson Teaching Theatre in Weyerhauser Hall Monday night for a screening of The Assissination of Jesse James by the Coward Robert Ford, which was based on his book. The free 6 pm screening will be followed by a Q&A with Hansen. He'll also do a reading on Tuesday. The movie got a lot of great reviews when it came out; here's a look at the trailer (and did I mention, Brad Pitt!):

LIVE BANDS | Slipknot is the headliner of a Spokane Arena gig, and with good reason — they've been thrilling their legions of Maggots for more than 15 years thanks to insane live shows. Read our preview/comparison of Slipknot to GWAR right here. For this guy, though, the presence of Suicidal Tendencies on the bill is the real reason to rejoice. The old L.A. skate punks have been thrashing since the early '80s, and their tune "Institutionalized" is a punk classic. Beartooth is also on the bill. 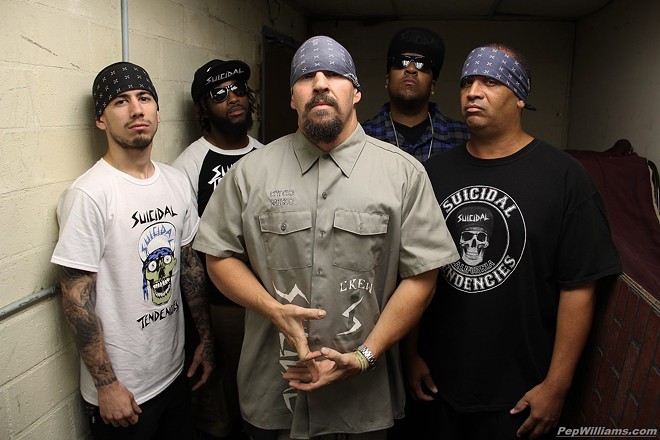 Suicidal Tendencies are possessed to skate, and potentially need to be institutionalized.
MUSIC EVENTS | A show of a considerably mellower vibe will be going down at the Bing, where Howard Crosby will be paying tribute to his uncle and the theater's namesake by delivering some of the crooner's classics.

FILM | It's Suds & Cinema with the Inlander night! Get your pic taken with a real DeLorean! Win your own flux capacitor! And most importantly, settle in to watch Back to the Future II while sipping some tasty No-Li beer at the Bing. Here's a look at what the future-looking film got right and wrong.

Where are the damn hoverboards!?!
LIVE BANDS | Canada's Viet Cong has decided to change their name, but hopefully they won't change anything about their snarling post-punk sound. Read our story about the band, then consider a trip to The Bartlett to check them out. Here's a little sample:

LIVE BANDS | Gregory Alan Isakov has built a fervent following thanks to amazing live shows and a knack for crafting beautiful folk tunes. He's headlining at The  Bartlett, joined by Laurie Shook of the Shook Twins opening up. Over at the Knitting Factory, a considerably more aggressive brand of rock is the order of the day as Clutch, Corrosion of Conformity and The Shrine bring the noise Thursday night.

VISUAL ARTS | Take a little trip down the road for the second-ever Art on the Prairie event featuring all manner of cool arts and crafts. It's happening at the Moran Prairie Grange both Saturday and Sunday.

LIVE BANDS | If you've never seen Oregon blues-rock duo Hillstomp, you need to fix that, and you can do so at The Bartlett Friday night. And over at Chateau Rive, Peter Rivera brings some otherworldly percussion to the killer underground venue.

COMMUNITY | Looking for a way to help the community and spend a beautiful day outdoors? Perfect timing! It's Reforest Spokane Day on Saturday, and you can help plant trees along the Spokane River and in other areas in the event organized by the Lands Council.

LEGO lovers, get building and plan to enter the MAC's sculpture contest