College English professors are known to entice distracted students with promises of extra credit for attending guest lecturers and authors on campus. While extra credit obviously does not exist in life outside higher education, that doesn't mean your motivation should be any less to glean some imparted wisdom (for free) when several masters of the written word visit local universities throughout the school year.

Since news of on campus events doesn't always spread far amongst non-campus folks, here's a roundup of the writers coming to the Inland Northwest in the coming months:

Eastern Washington University's Visiting Writers Series is a program of the school's prestigious Inland Northwest Center for Writers MFA Program and EWU's community literature program Get Lit!. The 2015-16 season of visiting writers includes many non-visiting authors, too, and it kicks off with its first event next week. Events are free and open to the public, and include a reading, Q&A and book signings. All but two events are held at Auntie's Bookstore, starting at 7 pm. Perfect timing since parking downtown is free at meters after 7 pm during the week.

Nov. 13 | Linda Bierds
The award-winning, Seattle-based poet teaches at the University of Washington, and has won numerous honoraries for her "forceful and scholarly poems" that "investigate science, history and art." Her work has been published in the New Yorker since 1984. 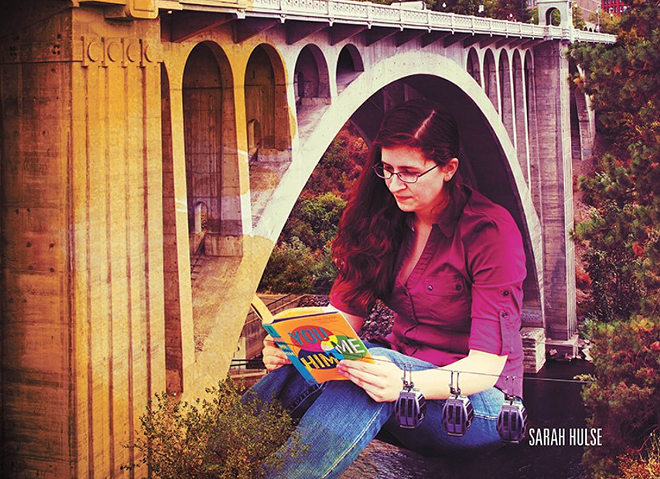 
Nov. 20 | S.M. Hulse
This young Spokane native's novel Black River debuted at the beginning of the year, and to much critical acclaim. Hulse has a true talent for writing the West, and her memorable first novel is stunning and emotional with its raw characters and setting.

Dec. 4 | Bethany Schultz Hurst
This Pocatello, Idaho-based writer is an EWU MFA grad, and her writing is also rooted in the identity of the Western landscape. The poet, whose full-length collection Miss Lost Nation was released last year, teaches English and creative writing at Idaho State University.

Feb. 26 | Lidia Yuknavitch
This author's writing is not for the meek. Just read this piece in the New Yorker, titled "The Wild, Remarkable Sex Scenes of Lidia Yuknavitch." Her most recent novel, The Small Backs of Children, is a national bestseller, and Yuknavitch is beloved for her writing that pushes boundaries of creativity and what we define as art. This is a reading not to miss.

April 14 | Paul Harding and Nance Van Winckel
Harding's 2010 debut novel Tinkers won the Pulitzer Prize for fiction, the first independently published winner of the honor since 1981. Harding is joined at the reading by Spokane poet/writer Nance Van Winckel, who has published numerous collections of short stories and poems. Van Winckel's latest project is a stunning combination of her poems with photographs.

April 29 | William Finnegan
A staff writer at the New Yorker sine 1987, Finnegan has reported from around the world and has won numerous awards for his journalistic work. He's also published several nonfiction books, the most recent his 2015 memoir Barbarian Days: A Surfing Life. Personally, I can't wait to hear this renowned journalist speak.

May 13 | Elizabeth Spires
This poet and children's book author is, like her contemporaries here, the recipient of many honors for her work, and her fiction pieces have been widely published. One of her most well-known works is the children's book The Mouse of Amherst, a charming story about a little mouse named Emmaline who lives in the wall of Emily Dickinson's bedroom.

While Eastern is kind of outdoing everyone with its impressive slate of guest writers, there's still more. Washington State University also hosts several guest writers stopping by the Palouse this school year:

Nov. 12 | Editing and Publishing Panel
This event that's open to the public is led by poets Stephanie Lenox and H.K. Hummel, who are joined by Spokane's own Sam Ligon (he teaches at EWU and is the editor of its lit magazine Willow Springs) and Illinois-based poet Jon Tribble.

Feb. 25 | Justin Torres
This young American novelist's debut novel We the Animals is a national bestseller and is currently being adapted into a film. Torres' short fiction and nonfiction has been widely published, and he's basically been honored with every important award in literature. This is another can't-miss event on the year's regional event schedule.

March 23 | Kevin Willmott
Not as traditional a writer as the others on this list; Willmott writes for film and the stage rather than the page. His work largely focusing on historic events and black issues. Willmott currently teaches in the film studies department at the University of Kansas.

April 21 | Sean Thomas Dougherty
A performer as much as he is a poet, Dougherty's work is varied in genre and influence. He has performed across the U.S. and Europe at hundreds of universities.

Gonzaga University is another local powerhouse when it comes to hosting guest writers, and has several notable names coming through the area in the coming months:

Jan. 27 | Manuel Gonzales
This writer currently teaches at the University of Kentucky, and has published a collection of short stories and has a forthcoming novel, The Regional Office is Under Attack. He'll read at 7:30 pm in the Globe Room as well.

Feb. 16 | Tony Hoagland
This poet has won multiple awards for his poetry collections, including the titles Sweet Rain and Donkey Gospel. His reading is at 7:30 pm in the Hemmingson Center Ballroom.

March 29 | Robyn Schiff
Another poet coming for this year's series, Schiff teaches at the University of Iowa and has been a finalist for the PEN award. She reads at 7:30 pm in the Jepson Center Wolff Auditorium.

April 19 | The last event in the series is for Gonzaga Writes! and features Gonzaga's own Meagan Ciesla reading alongside winners of the Michael and Gail Gurian Award, presented to Gonzaga student writers. The event is at 7:30 pm in the Wolff Auditorium.

Nov. 18 | Alex Kuo
As part of the university's English department's Endowed Reading series, this award-winning writer and documentary photographer comes to Spokane. This event happens at 7 pm in Whitworth's HUB, and is free and open to the public.