Tony Brown, of Ruins
On an average night, Ruins is one of Spokane’s most interesting and innovative restaurants in the region, led by chef and owner Tony Brown’s ever-changing small-plates menu. In a relatively unremarkable building on North Monroe Street, just around the corner from the county jail, Brown has created a restaurant where other chefs come to while away an hour after their shifts and delight in well-prepared food. And that’s just on an average night.

Brown had help in his tiny kitchen.
click to enlarge 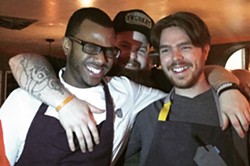 From left: Kwame Onwuachi, Chad White and Phillip Frankland Lee at Ruins
For one, there was Chad White, Spokane-born owner of restaurants in San Diego and Tijuana, who was just recently eliminated from the current season of Bravo TV’s Top Chef and is in the process of opening a place here. And there were two of White’s friends, also competing on Top Chef: Phillip Frankland Lee and Kwame Onwuachi, who flew into Spokane hours before dinner service to help in the special, multi-course meal inspired by Mexican street food.

The dishes were playful and tasty, beginning with Chef Phillip’s mussel and tequila shot seen below. (He brought ingredients with him, but TSA security got to them first.)
click to enlarge

The first course, by Phillip

Besides the tasty food and expertly crafted cocktails, something else became very clear last night: Spokane’s chef culture is growing, and rather than see each other as competitors, local chefs are working together, supportively, to create new and interesting things. In March, for example, Hansen is organizing Chef’s Week. And later this month, there’s Inlander Restaurant Week, featuring 100 restaurants all doing special three-course meals.

On average, it's a very good time to eat!

Last chance to see Legos at the MAC; plus, new Tuesday hours