Get your Irish up: Tunes to warm up for the St. Patrick's Day Parade 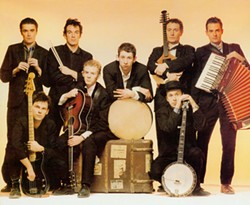 The Pogues
Officially, St. Patrick's Day isn't happening until Thursday, March 17, but the festivities start earlier than that, what with Spokane's annual St. Patrick's Day Parade happening this Saturday at noon (here's a map), and pre-partying starting pretty much first thing Saturday morning among some hearty revelers like the city's Irish Drinking Team, which has a 12-hour pub crawl planned beginning at 7 am Saturday.

To get in the proper spirit of the holiday, it's good to delve into some classic Irish tunes, as well as some not-so-traditional rock delivered by Irish artists. Here's a handy batch that might inspire you to dig out your kilt, pop a Guinness, wear some green and join Saturday's festivities:

The Pogues, "If I Should Fall From Grace With God." Simply one of the best of the modern Irish rock bands, blending some tradition with punk attitude courtesy of lead singer Shane MacGowan:

The Chieftains with Carolina Chocolate Drops, "Pretty Little Girl." The Chieftains are Irish classics, and they love collaborating with artists from all genres. On this one, they illustrate the shared history of traditional Irish sounds with American bluegrass:

Thin Lizzy, "Whiskey in the Jar." Classic rockers, led by Irishman Phil Lynott, tackle a traditional tune in a version that Metallica would later replicate, more loudly and pretty successfully:

The Dubliners, "I'm a Rover." When it comes to Irish drinking songs, few do it better than the Dubliners:

Stiff Little Fingers, "Suspect Device." Straight outta Belfast, one of the best old-school punk bands. And they're still going strong! This is one of their most popular tunes:

An Dochas,"The Dragonfly Set/ Morrison's Jig." Looking for some local Irish tunes? An Dochas, a Spokane-based group, plays traditional Irish music with a lively twist. Below you'll find a full album, but start with No. 13:

Hard to believe it's been 10 years since Adam Morrison-mania