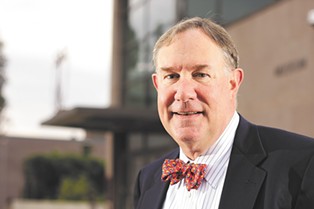 Young Kwak
After one witness testified in a whistleblower investigation about then-MAC director Forrest Rodgers, Rodgers sent a critical letter to that witness's employer.
The long-in-the-works report from the state auditor's office about the Museum of Arts and Culture is pretty brutal in what it reveals about the practices of former Museum of Arts and Culture director Forrest Rodgers (and the oversight of the museum's board and foundation.)

While the bulk of the report details financial mismanagement (including $21,000 in bonuses) and violation of state law, it's worth highlighting one conclusion in particular: Rodgers, who had already been fired once in 2012 and subsequently rehired after threat of legal action, interfered with the investigation by sending a letter to a witness's employer incorrectly claiming he knew — through a confidential source — false statements the witness had made.

We've already reported on the clash between Rodgers and Richard Bruce, a graphic designer and a museum assistant employed by the Kalispel Tribe who had office space in the museum.

But earlier this week, the Inlander obtained a copy of an e-mail that Rodgers sent to Bruce's supervisor at the Kalispel Tribe on Feb. 3, the week before Rodgers was fired. In it, Rodgers lambasts Bruce for what he supposedly told the auditor's office investigator, claiming Bruce "continues to engage in destructive conversation with Museum staff and has provided state officials with incorrect information."

It targets Bruce for both filing a formal complaint and speaking with the state auditor's office investigator.

"You also know that Richard filed a formal complaint with the Museum Board charging me with 'intimidation, retaliation and creating a hostile work environment," Rodgers wrote. "In the meantime, Richard was interviewed by the state auditors investigating a whistleblower complaint about Museum and Foundation policies, finances, and operating procedures."

"We did take exception to that activity by the former director," says Jim Brownell, whistleblower manager for the Washington State Auditor's Office.

The report dives into detail:


According to the witness, after his employer received the email from the subject, he was given three options by his employer: the first two were to change office locations and the third was to be laid off.

In our initial meeting with the subject, we requested that he not attempt to determine who the whistleblower was or who our witnesses might be. We also advised him that state law prohibits retaliation against anyone who cooperates with our investigations.

We spoke with the subject regarding the email and his intent behind sending it. The subject said it was not his intent to interfere with the investigation. He said he had approached the witness’ employer in the past in an attempt to get the employer to do something about the witness’ behavior and this was just another attempt. When asked why he felt the need to include information from this investigation, he said it was just another demonstration of the witness’ damaging behavior toward the Museum.

Brownell, however, says that the auditor's office doesn't have the authority to conclude Rodgers' actions consisted of retaliation. Someone would have to make a complaint to the state Human Rights Commission for the state to come to that conclusion.

We have a call into Forrest Rodgers, and will update if he responds. The report also
concludes that:

• That Rodgers was seemingly paid more than $21,000 in bonuses without approval from the full board and from the incorrect source.

"A state employee can ask his employer for more money," Brownell says. "But he was paid with funds with funds that were not state funds from his employer — it was his Foundation."

When the auditor's office emailed him asking for clarification about the matter, Rodgers did not respond.

• That $48,000 in payments that were made in violation of state law, including restaurant meals without documentation, more than $900 for honoraria for five different employees, and $1,200 in museum funds used to improperly pay for expenses from the museum's foundation.

"It all come down to the subject was ultimately responsible for establishing controls and procedures, which ultimately failed to do," Brownell says.

"[Rodgers] said he did not consult with the Museum’s legal counsel before deciding to accept the loan," the report reads, "[Rodgers] was not aware of any statutory authority that would allow the Museum to accept a loan from the Foundation."

• That paperwork regarding contractors was sloppy and/or incomplete. "[Some] contracts [Rodgers] provided lacked signatures and were missing pages," the report reads. "Some of the individuals identified by the subject as 'contractors' did not have current contracts in place."

In several cases, the state concluded, workers considered "independent contractors" should have legally been considered employees. "[Rodgers] said having contractors alleviated the need for the Museum to pay health benefits," the report reads.

The museum has already moved to correct this.

• That Rodgers was improperly reimbursed for business trips.

"We found the subject violated required state policies when he failed to obtain the most economical price for travel and incurred additional expenses for his personal convenience," the report concluded.

On two occasions, the report found, he claimed a dinner "per diem" when his flight had landed in Spokane at or before 5 pm.

Often, the report found, he would buy tickets at such a late date that he paid more. If his tickets for 11 trips to Seattle had been purchased earlier, the state auditor office concluded, he could have saved the museum over $2,400.

In one case, the report says, Rodgers asked a job applicant from North Carolina to meet him in Missouri to present the job application to him.

"[The applicant] said he did not understand why the offer had to occur in and had told [Rodgers] he was not interested in meeting in person," the report says. "He said he spent only a few hours with [Rodgers.]

• That Rodgers improperly subsidized Cafe vendor with over $9,000 from Museum and foundation funds for the vendor's business losses.

The contract with the vendor has since been terminated.

• Typically, each state agency, including the museum, should have a list of internal rules, governed by state statute, to make sure many of these problems don't happen. But Rodgers and the board had repealed those rules in 2013 and hadn't replaced them.

"When we started the investigation, we looked for the rules, expecting to see, 'this is how it’s supposed to work.' And they were gone," Brownell says. "The required rules had been repealed. They weren’t just modified. They were completely stripped."

However, Brownell says that, in this case, it was the board's responsibility, not Rodgers', to make sure those rules existed.

In the MAC board's response, they list a number of actions they're taking to align their policies and procedures with state law.

Here's the complete report from the state's auditor's office.


Museum of Arts and Culture Investigation