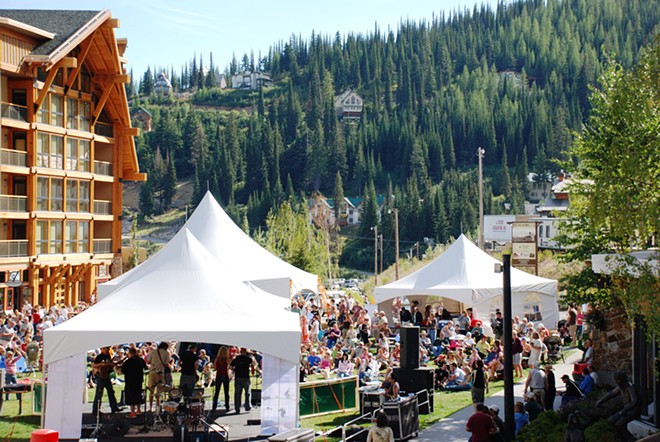 Schweitzer Fall Fast is Labor Day weekend.
Well, that was fast. Given the end of August and start of football season, I guess we can go ahead and say we're in the fall. But we can do our best to take advantage of the last strains of summer this week with some good times found in our event listings and Staff Picks.

SPORTS & OUTDOORS | The Spokane Indians are in their final homestand of the season (at least until the playoffs), so head out to Avista Stadium for a game against Hillsboro at 6:30 pm.

LIVE BANDS | Boy-band alert! The 5 Seconds of Summer show at Spokane Arena was seemingly announced when the Aussie lads in the group were still mere fetuses, and the day is finally here. Ready your carpools. Here's a fan-shot taste of what's in store. Bring earplugs, parents:

FOOD & DRINK | The annual mix of fair-food grub, music and games hits Riverfront Park once again — yes, it's opening day of Pig Out in the Park! It's year 37, so celebrate with a fried Twinkie or something.

LIVE BANDS | A whale of a double-bill stops by The Bartlett in the form of Rocky Votolato and Chris Staples, two mighty fine singer/songwriters. Votolato is celebrating the 10th anniversary of his Makers album. Here's a live version of the title tune:

FOOD & DRINK | Masselow's out at Northern Quest Resort & Casino is hosting a "Build Your Own Bitters" event, where you'll learn all about the tasty flavors and sample a few cocktails as well.

FILM | Rob Zombie's movies are love-em-or-hate-em affairs for the most part. Either you love the campy House of 1,000 Corpses, hillbilly classic The Devil's Rejects and his genuinely scary Halloween revamp, or you don't. I dig 'em, in case you couldn't guess, so I'm excited about the one-night-only special screening of his new flick, Rob Zombie's 31, happening tonight at Regal Cinemas at Northtown Mall.

VISUAL ARTS | It's First Friday, and the start of a long weekend! Get out there and see some art, people!

FESTIVAL | Well, it's called Schweitzer Fall Fest, so I guess it really is fall. Go have some beers in Sandpoint and enjoy the last throes of summer for a few days.