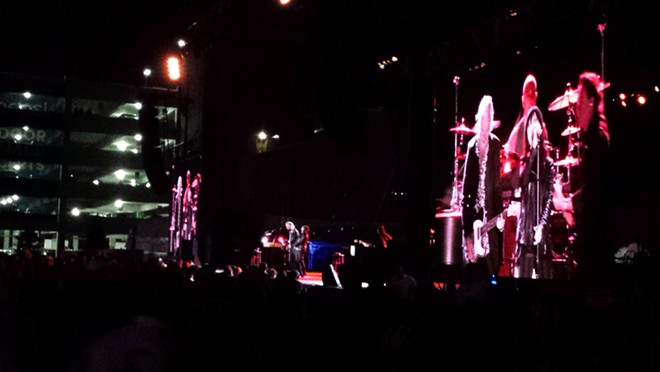 Dan Nailen
Somewhere up there Pat Benatar and Neil Giraldo are rocking out.
In case anyone attending the Pat Benatar Northern Quest show Saturday was unaware of the significant role she and her songwriting partner/husband Neil Giraldo played in '80s-era rock and pop music, well, the couple proved happy to help out.

Before they even took the stage, the crowd got a lengthy biographical film about their history, both personal and professional, that included plenty of video clips from the early days of MTV when Benatar was one of the only female faces gracing the channel, and one of the most potent voices on rock radio as well.

Benatar and Giraldo also talked — a lot — throughout the show. About the songs. About each other. About their influences. Lots and lots of talking. A few songs in, as Benatar told the crowd the band's current road trip is the "We Live For Love Tour," named for her 1979 debut album In the Heat of the Night, she informed the audience — a near sell-out — that this month marks the 35th anniversary of MTV (she had the second video ever played, "You Better Run"), the 36th anniversary of her Crimes of Passion album, the 37th anniversary of the start of her musical partnership with Giraldo, and the 34th anniversary of their wedding anniversary, noting with a joke, "Of course, I was only 12" when they got hitched.

Whew. Did I mention there was a lot of talking?

Thankfully, when Benatar and Giraldo got down to business with their backing band, they offered a far more convincing case for historical significance to American rock music history than anything they said between tunes.

The 63-year-old Benatar still has rock-solid pipes, and the songs she and the guitar-man hubby she calls "Spider" wrote and performed together through the Reagan era filled arenas and airwaves then and still sound pretty great now.

The opening trio of "All Fired Up," "We Live for Love" and "Invincible" came rapid-fire before the delicate piano intro of "Promises in the Dark" opened up into the familiar riff-rock favorite.

The least-familiar tune of the night was the mellow "In These Times" from an acoustic album the pair made in 1997, Innamorata. Other than that, it was hit after hit, including "We Belong," "Heartbreaker," "Hit Me With Your Best Shot" and, of course, "Love is a Battlefield."

"One of the great things about being around forever is you have a plethora of stories to tell," Benatar said before talking about being holed up in a cheap Oklahoma City hotel when she saw MTV hit the air, a nice way of introducing "You Better Run."

Among the pleasant surprises were a brief foray into some of Benatar's '80s peers, including Rick Springfield's "Jessie's Girl" and an acoustic cover of Prince's "When Doves Cry."

About the opener
Melissa Etheridge is no typical opener, and she delivered a strong hour of her straightforward rock full of her hits like "I Want to Come Over," "Come to My Window" and "I'm the Only One." Apparently she didn't realize she had 90 minutes to play, because after a big goodbye an hour in, Etheridge and her band came back for 30 minutes they filled mostly with an epic jam and a drum solo. Not exactly her strong suit.

Who speaks for Condon recall? The recall petition filer? The #RECALLCONDON page? The Daiquiri Factory guy?