Who speaks for Condon recall? The recall petition filer? The #RECALLCONDON page? The Daiquiri Factory guy?

One of the three Facebook pages focused on recalling Condon
As every organizer knows, the trouble with grassroots movements is you can't always determine how the grassroots grow.

It happened to the Occupy Wall Street movement, where protests against corporate power and bank bailouts produced competing groups with contradictory messages.

It happened to the Tea Party, where a slew of Super PACs preyed upon activists to get rich without actually doing much to advance Tea Party goals.

And it's happened to Black Lives Matter, where a movement that preaches non-violence was tarred with a few isolated protestors chanting "What do we want? Dead cops!"

So this, from the very beginning, has been a challenge for the effort to recall Spokane Mayor David Condon.

Ben Rall, a Spokane Green Party activist, says he was in Pensacola, Florida, on a military tour when the news broke last November that the city had hidden sexual harassment allegations against its former police chief until after Mayor Condon's re-election. 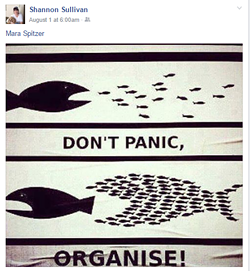 Facebook.com screenshot
The message the woman who led the Jim West recall sent a #RECALLCONDON page administrator.
It attracted plenty of attention: Environmental activist Mara Spitzer, one of the page's administrators, says that Shannon Sullivan, the woman behind the 2005 Jim West recall, contacted Spitzer a few months ago, and told her that she was there if she needed any advice.

On Aug. 1, Sullivan tagged Spitzer in a photo of a school of small fish teaming up to eat a larger one. "DON'T PANIC," it said. "ORGANISE."

"I think she was just saying, 'Organize'," Spitzer says. "Just an encouragement thing. That’s the way I took it. Trying to encourage the recall."

But over the past year, without a clearly identified leader, the page became a clearinghouse for anti-Condon links and . For example, Rick “Harpman Hatter” Bocook, a top-hatted street musician with a penchant for feuding with downtown business owners, flooded the page with pictures of his anti-Condon sidewalk chalk art.

And initially, one of the most active #RECALLCONDON voices in the movement was a chap with a notorious reputation named Jamie Pendleton, the former owner of the Daiquiri Factory who sparked community outrage in 2014 when he remained defiant over the name of his “Date Grape Kool-Aid” drink.

Since then he’s lost a copyright infringement suit to Gonzaga University. He's pled guilty to felony grand theft, and been subject to a police investigation into whether he stole his daughter’s identity in an attempt to resurrect the Daiquiri Factory.

Not everyone on the #RECALLCONDON page thought the guy best known for making headlines with a date-rape joke was a good public face for the efforts to recall a mayor for mishandling sexual harassment concerns.

Pendleton quickly became one of the loudest anti-Condon voices. Like Spitzer, he filed an ethics complaint against Condon that was swiftly tossed out. He started a Change.org petition online — a petition which has no legal impact whatsoever — calling for Condon's recall.

John Waite, a local business owner and an admin on the page, banned Pendleton from the #RECALLCONDON Facebook page.

“He just kind of latched onto us. As soon as I saw what he was trying to do we him,” Waite says. “I think about a month into the group, I explained to everyone that he was not a person who needs to be associated with the group. He’s not a good person.”

In the months Pendleton shifted from using the @RecallCondon Twitter account exclusively to attacking Condon to using the account to litigate a whole litany of his personal and political grievances.

Among his targets: Judge Linda Tompkins (the Superior Court judge whose decision in his eviction hearing was overturned on appeal), GOP presidential candidate Donald Trump, the Spokane Police Department for joking about handcuffs, a KXLY reporter, Pendleton's landlord, paid signature gatherers,  and the Downtown Spokane Partnership for its comments about the Daiquiri Factory.

"If #AllLivesMatter then why is @SpokanePD and other #Spokane City Employees obstructing #SpokaneDaiquiri?" one tweet asked.

When Green submitted his recall effort, however, he created yet another social media presence, separate from #RECALLCONDON or Pendleton's presence. Green launched a new Facebook page, the Recall David Condon Committee. He put out a new website, recalldavidcondon.com. Both were sleeker, simpler affairs, focusing mainly on the recall petition.

Shortly after the recall petition was filed this month, Green says, Pendleton contacted him through the website, informing Green that he'd pointed recallcondon.com to recalldavidcondon.com. Pendleton offered to help.

"I didn’t respond to the offer for help," Green says. "I said 'thank you,' (for pointing the domain at the committee's website), but at this point there’s nothing to do the judicial hearing."

Green also noted that under Pendleton's ChangeSpokane Facebook page he had invoked the committee's name.

"I asked him respectfully to stop doing that," Green says. "I suggested from a strategy perspective, that silence was the best thing that could occur."

Pendleton’s enthusiasm hasn’t dampened. Asked by the Inlander how involved he was with the recall, Pendleton said “very,” and forwarded any comments to Green.

Spitzer, meanwhile, is happy Green is involved. Now, she says, it feels like everyone is combining forces.

"He called me a couple weeks ago, asking about how the group felt and what we were going to do," Spitzer says. "He said he had a number of groups that could go out and do the footwork on the signatures."

She says she talked with Green about how to separate the official recall effort from Pendleton's.

"When I met with David Green we talked about doing another page, to distinguish it from Jamie’s page," Spitzer says.

She says they'd even discussed moving the effort to the new Facebook page, then shutting down the #RECALLCONDON page completely.

But Rall hated that idea.

Rall doesn't want the group to look like it's been co-opted by the Democratic Party. He cites former presidential candidate Bernie Sanders, who "got all these people to register Democrat, and now he’s on the campaign trail with Hillary."

So far, Rall says, the #RECALLCONDON page will continue. He's talked with Green about it.

"We are awaiting the judge's decision before moving forward. It will remain active as new developments keep popping up," Rall writes in a Facebook message. "We have made our followers aware of the [Public Disclosure Commitment] and commission issues. We are hoping to use our collective resources when needed for donations and/or door knockers."

Indigenous Peoples' Day, alien signals and headlines for your Tuesday