Certified Public Accountant David Green filed recall charges against Mayor David Condon
In Spokane, you can't just file a recall against a mayor because you don't like him or he's unpopular or you think he's done a bad job.

You have to convince a Superior Court judge that the charges against the mayor rise to the level of "misfeasance, malfeasance," or a violation of his oath office. You have to get someone to submit recall charges with the Spokane County Auditor.

"Unfortunately, that turned out to be me," says David Green, a local certified public accountant who formerly served on the boards of the Spokane Symphony and the Northwest Museum of Arts and Culture.

This afternoon, Green filed recall charges against the mayor with the county auditor. That will be turned over to the Spokane County prosecutor to develop ballot language and then go to a Superior Court judge to determine if his charges rise to the level of recallable offenses.

But Green says his recall charges were not motivated by any "political animus." He talks in a clipped, precise sentences, choosing his words carefully.

"I’m not taking any pleasure in doing this. It’s sad that we have gotten to that point. I thought Mayor Condon was doing a good job [for the first three years]," Green says. "I do not understand what has happened in the last year and a half."

Last month, a controversial report by independent investigator Kris Cappel concluded that members of Condon's administration had intentionally withheld key information about the circumstances surrounding former police Chief Frank Straub's forced resignation; the report lit a fire under a largely dormant recall effort that had cropped up at the end of last year.

Green says he spoke with the members of the #RECALLCONDON Facebook page.

"My perception after a brief discussion was that they were more emotionally involved than taking a disinterested view," Green says. "I don’t blame them."

But he says he's trying to stick to factual observations.

1. Green accuses Condon of withholding key documents until after the election, citing the Cappel report for his evidence.

However, in the final version of her report, Cappel changed her conclusion, removing references accusing Condon and city spokesman Brian Coddington. After reconsidering the evidence, she determined that the question of whether Condon and Coddington had willfully withheld documents was inconclusive. However, she concluded that other members of his administration had purposefully delayed the release of records.

But Green still believes there's enough evidence in the report to suggest that Condon was indeed guilty of withholding records. Condon and his administration have emphatically denied that.

2. Green accuses the mayor of dishonesty for saying "no" when asked by an Inlander reporter if there had been "any sexual harassment complaints lodged against Frank [Straub]." He notes that the mayor later told Cappel that he did consider the sexual harassment allegations leveled by former police spokeswoman Monique Cotton against Straub to be a complaint.

This exchange is currently being litigated in the ethics commission, where Condon's attorney has argued that the mayor was only referring to official complaints in his denial.

3. Green accuses the mayor of violating his oath of office by failing to submit recently appointed police Chief Craig Meidl to the city council for confirmation.

Condon now says that the delay was only temporary and that he would eventually submit Meidl for confirmation. So far, he has not laid out a timeline for doing that, arguing that he's delaying the process "out of an abundance of caution and concern for him and his career." The council has decided to hold hearings anyway and plan to consider confirming him on Monday.

4. Green accuses the mayor of failing to follow the city's human resources policies, including in how it handled the sexual harassment allegations leveled against Straub by Cotton.

The Cappel report is highly critical of the city's human resources department and ambiguous policies. However, it also concludes that the city and police department's sexual harassment policies — for all their faults — were largely followed in the case of Cotton:


"Ultimately, the City resolved the complaint informally to the satisfaction of both Ms. Cotton and Chief Straub, and the resolution was effective... that was consistent with City and SPD policies both of which advocate informal resolution at the lowest level.

"Although limited in scope, the investigation complied with City policies to the extent that mere notification triggers a requirement to conduct an investigation. Not all of the procedural steps referred to in the policy were followed such as documenting the complaint, forwarding it to HR, or providing written findings to the complainant, but it appears that those steps are routinely overlooked by the City.


Asked about this, however, Green says that a judge will be the one to decide whether his complaint was valid.

"The judge is supposed to make the independent determination," Green says. "I don’t think it’s for you or to parse the words."

Green has already formed a Recall Condon and filed it with the public disclosure commission. But if the Superior Court judge determines that his recall petition can proceed, Green isn't sure if he'll be the one to lead the recall effort.

"My expertise is not in running campaigns," Green says

Green has a big task ahead of him. The first attempt to recall Spokane Mayor Jim West a decade ago was initially rejected. And the second went all the way to the Washington State Supreme Court before signature-gathering petitions could be circulated.

A call to city spokesman Brian Coddington Tuesday afternoon was not immediately returned.

*The RECALL CONDON group that once counted* controversial former Daiquiri Factory owner Jamie Pendleton among their members. While Pendleton was initially associated with the group, and still often posts on sites using the #RecallCondon hashtag, #RECALLCONDON group administrator Mara Spitzer says Pendleton has since been blocked from the page. The post has been updated to reflect this. 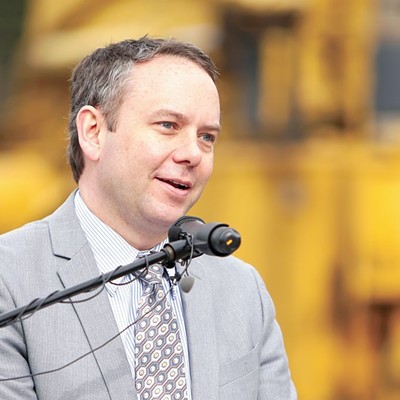