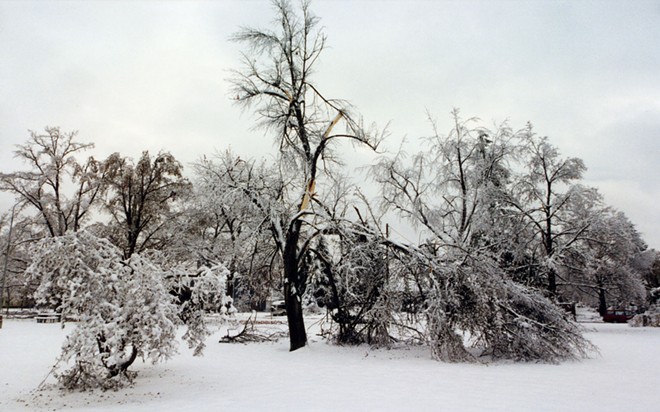 Dan Hagerman
A tree splintered by Ice Storm's wrath, in Spokane's Corbin Park.
While many of us last week looked back to events that happened a year ago — the massive windstorm that left so many without power (and heat) for days — another major weather milestone that happened around this time is also remembered: Ice Storm 1996.

Let's recap the details surrounding Ice Storm:
Several of us on the Inlander staff, have lasting memories of Ice Storm, which we share below. Leave your own Ice Storm memories in the comments!

Wilson Criscione, news staff writer
My 5-year-old brain at the time didn’t really understand what an “ice storm” was. My imagination jumped to something like the end of the world, or a winter playground full of magic icicles. Neither theory ended up being too far off.

Our house lost power for about five days, and my family slept in sleeping bags in the living room by the fireplace. Another family stayed with us for a couple nights. For me, it was basically camping. I learned about the power of batteries, flashlights, and how to build a good fire. It was an adventure.

At Lake Pend Oreille, we had a boat with power, a kitchen and a place to sleep in, so on the fourth or fifth night we drove out there. At the boat, we thought we could still have heat even if the rest of our world had no electricity. But when we got there, ice covered the entire shed where we kept the boat, and marina workers were trying to melt it off. They told us we had to leave, because it wouldn’t be safe to be in the shed when it all fell off.

So we drove all the way back home. Luckily, the power in our neighborhood (South Hill; near Hamblen Elementary) came back on soon after we got back. It could have been worse.

Dan Hagerman
Toppled pines along Shady Slope Road, in North Spokane County.
Chey Scott, culture staff writer
I was eight years old when Ice Storm hit. At the time, my family lived about 30 miles outside of Spokane, on 20 rural acres between the tiny towns of Ford and TumTum. In the country, wintertime power outages are not unusual, but until Ice Storm, I'd never experienced anything like this — more than a week without power in sub-freezing temperatures.

Thankfully, we had a reliable wood-burning stove to supplement our main pellet stove, and a gas-burning oven for cooking. But because our water came from a well, no power meant no water for showers or the toilet. Having to bundle up and trudge through the snow to go the bathroom outside gets old fast. I remember, later, being shocked to learn that in the city, people still have running water when the power goes out!

At night, in the electrically untainted silence, I remember lying in my bed under extra blankets and listening to the ponderosa pine trees snap and crash in the woods around us. We spent the next spring clearing the woods of broken limbs and trunks; it's a fire hazard, you know.

More than a week later, we ate Thanksgiving dinner by candlelight at my grandparents' nearby house. When our rural relatives outside of Davenport got their power back days before us, we went there to take showers and do laundry.

In the end, Ice Storm obviously sucked, but as a kid it was sort of fun. At the time I was unapologetically obsessed with the Little House on the Prairie books, and living without the convenience of electricity offered a realistic taste of life in the 1800s. Still, when the power eventually came back on, I was glad.

Letter to the Editor: Spokane, you're great!