Letter to the Editor: Spokane, you're great! 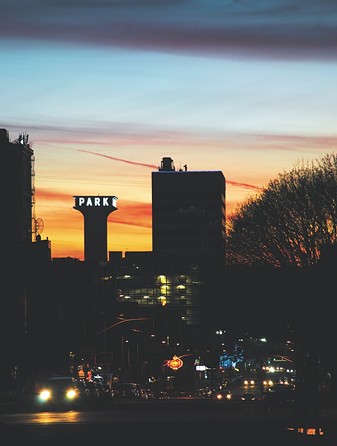 Stuart Danford
"Spokane Sunset," a photo submitted for the 2016-17 Annual Manual cover contest.
While the political divide across America seems to grow deeper every day post-election, what follows is a bright spot, and something that actually has little to do with politics.

Some of you reading this may remember an awesome social media campaign making the rounds last month, courtesy of our great Northern Neighbors. "Tell America it's Great" was the work of a Toronto-based ad agency, featuring a candid video of friendly Canadians sharing what they think is great about the Red, White and Blue. It remains a fun and heartwarming reminder that our country is, and has always been, great.

Turns out, some of our Canadian friends also think Spokane is pretty great, as pointed out in this thoughtfully-written letter recently sent to the Inlander. (We think you're great, too, Canada!)

It's a little too long to print in our weekly "letters to the editor" section, which also doesn't run online, so I thought it would be worthwhile to share it here, for all Spokanites to enjoy:

My girlfriend and I visited Spokane last weekend in part to attend the Snowlander festival. We had a blast, and really enjoyed the city. I felt moved to write a short article about my impressions of Spokane, and humbly offer it for consideration.

Your fair city is an undiscovered gem. Let me explain.

I’ll confess. As a Canadian, a part of me was a little hesitant to visit in the wake of the election, but Washington seems like a pretty progressive state, with your liberalized cannabis laws and copious craft beers.

So we packed our bags, exchanged pleasantries with the lonely border guard, and headed to Spokane for a weekend. I was pleasantly surprised to find a thriving small metropolis, bursting with character and culture.

I heard a few locals say Spokane is a bit like Portland five or 10 years ago. But I say it’s got a distinctiveness all it’s own.

You’re in that sweet spot — not too big, but large enough to have a legitimate downtown. It’s just the right size to wander from one end to the other while downing a responsibly-sourced, ethically-brewed gourmet coffee with hints of blueberry and cocoa. The baristas are so damn friendly and enthusiastic that they could have sold me fermented goat’s milk and I still would have been happy.

Your downtown buildings are a set designer’s fantasy come to life. These architectural jewels are everywhere, rising up like an outdoor amusement park. Somehow you avoided tearing down these heritage wonders from a different era of craftsmanship and care. Kudos.

How many other proper cities can say that they have a view of forests from downtown? And lakes scattered around the area like they’re giving them away? No wonder you have so many bike lanes and a reputation for being an urban-outdoors mecca.

Your riverfront with vestiges of Expo is still alive and well. And it features a skating trail?! Who does this? You are more Canadian than we are. Fitting, I suppose, as you do have a Canada Island in the heart of the city.

Your craft breweries are off the hook! It’s hard to go more than a block or two before stumbling into a brewpub or bar with adventurous ales and bartenders sporting more flannel and moustaches than most mountain town dwellers.

North of the border, we still think that having one IPA on tap is an accomplishment. We also think that poutine is a meal, so I suppose you can’t blame us. We’re still a young country.

Your restaurants are oozing with character and creativity. A pub serving tater tots with braised short rib? Sure. A downstairs bar that doubles as the set for a Mumford & Sons video? Bring it on.

You even have a train station and an international airport (it’s amazing what you take for granted when you move to the Kootenays).

And hey, if things really get hairy over the next few years, you’re only two hours from the border.

We know all about welcoming Americans to our little slice of paradise up here. Draft dodgers came here in droves decades ago, and their counter-culture spirit still influences places like Nelson today.

But if you come this time round, just don’t forget to bring your IPA’s.

Thanks, John! We welcome you back to our humble metropolis any time.