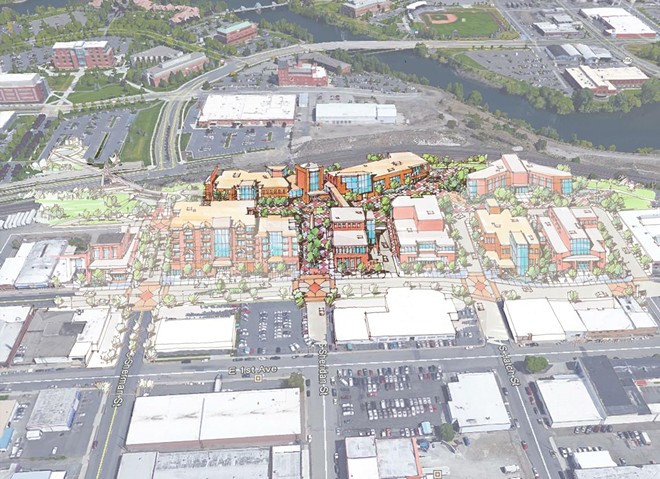 Avista rendering
Say hello to a transformed East Sprague neighborhood (in a few years)
ON INLANDER.COM

Awwww... they think they're people!
A study of canine cognition suggests that dogs may not be so different from toddlers after all.

Zag when others Zig
Has anyone been following Gonzaga basketball? Know if they're good this year? We assess the team's b-ball chances in the West Coast Conference Tournament. (B-ball is slang for "basketball," in case you were wondering.)

Brown in Town
Alton Brown is coming down to town to turn that frown upside down. But Brown needs the lowdown of the spots around most deserving of great renown that deserve the crown.

All along the Riverfront
The Riverfront Park project remains on schedule, despite the hellish winter.  (Spokesman-Review)

Money Pot
KXLY breaks down how cities and counties are getting pot revenue. (KXLY)

Investigative Apathy
Republicans don't seem all that interested in a special inquiry into Trump's Russia ties for some reason. (New York Times)

Media Bias
A left-wing former journalist has been arrested and charged with at least some of the anti-Semitic bomb threats recently. Police say he was waging a harassment campaign against a woman. (Washington Post)