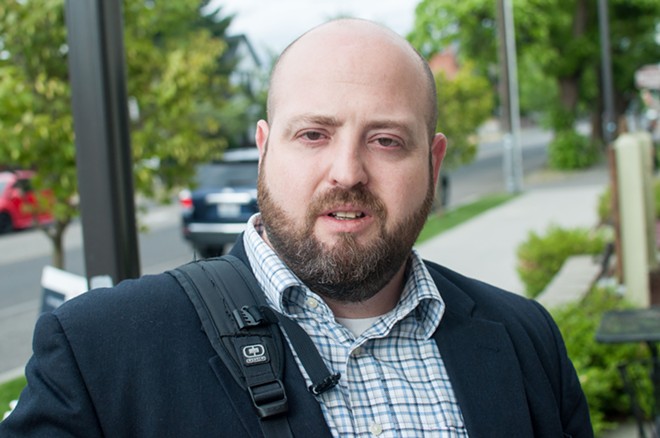 Daniel Walters photo
City Council candidate Brian Burrow is looking to unseat Candace Mumm in District 3 this November.
Of late, it's been easy to split Spokane City Council into two groups: The six left-leaning councilmembers on one side, and lonely conservative Mike Fagan on the other. So while the office is technically nonpartisan, it's generally been easy to categorize the councilmembers ideologically.

When City Council candidate Brian Burrow, a project manager contracting with Avista Utilities, launched his campaign earlier this month to run against City Councilwoman Candace Mumm in District 3, his Facebook kickoff page said he wants to move the city in a "conservative direction."

But as we sit down to talk about his run, Burrow is reticent to explicitly categorize his political philosophy, though many of his views — like his skepticism over minimum wage hikes — lean conservative.

"I don't believe we can accomplish very much when we take a polarized view," Burrow says. "I can't recall any time out there in the workforce when that polarized opposing view has led me to success. I've always found ways to work with people."

Instead, Burrow pushes people to look deeper than pure politics.

"To look at the values that candidates that come in with, and their experience and background and education, is perhaps more important in this race than identifying which camp they fall under," Burrow says. "Running as an economist, rather than a Democrat or Republican, I think is very important to consider, because I understand what it's like to run a business and to recruit businesses."

Beyond his business experience, Burrow knows the struggles of the West Central neighborhood both personally and academically. He grew up in the low-income neighborhood, attending Holmes Elementary, Glover Middle and North Central High School.

While he was pursuing a master's degree, Burrow returned to examine what happened to his sixth-grade classmates. While he never finished that degree, he saw how many of them became pregnant as teenagers, committed felonies, died before the age of 25 or never graduated college.

"I actually developed an economic formula that helps predict what your lifetime earnings are going to be based on the choices you made," Burrow says.

In our initial conversation, Burrow was wary of going into full-scale attack mode regarding the current city council. Instead, he tried to generally strike a sympathetic tone to the challenges that have faced the council.

"It’s easy to point the finger at folks at what they did over the last four years. And that's an easy way out," Burrow says. "I admire and respect people who work hard to do their job. I really do. But I also believe in continuous improvement."

So when confronted with a lot of the issues the council has dealt with, Burrow's critiques are more subtle than just disagreeing wholesale with a council vote.

He doesn't, for example, unleash full salvos at the controversial Monroe Street road diet. He simply suggests that it's misplaced.

Yet he dismisses the notion that, just because the council never voted directly on the project, they can duck some of the against it.

'I feel like city council has the opportunity to lead and to influence and be an instrument," Burrow says. "It's easy to pass the buck on someone when something doesn't go quite right. ... And it's easy to take credit when it does."

In our initial conversation, Burrow often struck the one hand, but on the other hand" position. On the debate over the city's 24-hour parking limit, he recognizes the frustration of homeowners being ticketed in front of their house — himself parks in front of his house — but also sees the need for the city to have a tool to respond to abandoned cars.

"I feel there should be some ordinance in there to use as a tool when needed,” Burrow says. “I don’t think it has to be enforced all the time. “

Mostly, Burrow argues that the council needs to listen more and communicate better.

For example, he says he's supportive of the Riverfront Park rehab, but as a project manager on contract with Avista, he's critical the execution.

"Very large projects, like the $64 million park rehab, leave a lot of room for better leadership and better communication with the public," he says. Recently, the Riverfront Park project has come under criticism for considering the possibility of abandoning initial plans to cover the U.S. Pavilion.

"So it doesn't come out [later] in a news article that we've taken this big left turn up here and now this is the direction we're when they knew that early on and could have engaged with the public."

Burrow acknowledges that the city council doesn't have authority over the Spokane Park Board, but says it could have an important influence.

"It's a matter of leadership," Burrow says. He notes that, as a project manager, he's helped to corral people that don't work for him in order to finish the project on time and under budget.  "If you're going to be a leader, then lead. Use your influence and your ability to lead a body of people to make your projects more successful, even people don't report directly to you."

"[Voters] want potholes fixed," Burrow says. "The council has spent time on other issues for the sake of getting their name in their paper."

But when I press for specifics, Burrow demurs.

"I hate to throw specific individuals under the bus," he says. "If I tell you some issues, it's going to do that. I don't really want to do that."

Instead, toward the end of the interview, Burrow questions whether Mumm's voting record matches her 2013 campaign rhetoric.

"I believe that I’ve seen her address different bodies of people where she changes her stance on things to match the audience. She made herself out to be a conservative, business friendly, almost a Republican candidate. Her voting record shows the opposite," Burrow says. "She’s on the liberal side. Whether that's good or bad, I’m not going to comment on that."

He says she has a "steadfast alliance" with City Council President Ben Stuckart, though there have been a few areas in the past few years where Mumm has voted differently. Mumm, for example, voted against hiring Michael Ormsby as city attorney and the use of eminent domain to pave the way for a street project. But on most issues, Mumm reliably votes with Stuckart. She voted with Stuckart to put the oil trains initiative on the and voted with him again three weeks later to take it off the ballot.

A few days after our interview, Burrow emailed a follow-up with several other criticisms of Mumm. These struck a much more aggressively critical tone. He slams her for supporting the Spokane Transit Authority's tax increase even after questioning the change in revenue projection methodology. He critiques her for campaigning for County Commissioner while serving on the council. He calls her out for changing her tune on whether the city council position should be full-time.

"I just don’t think that we have the same Candace Mumm today as we voted for in 2013," Burrow writes, "And I am interested to see if she returns to the values of 2013 Candace that got her elected now that she is once again on the campaign trail or if she will run on the values of 2017 Candace."

Not surprisingly, Mumm disagrees with this criticism. She argues that she has been able to represent business interests effectively.

She highlights her efforts working with the neighborhood, developers, the and Spokane Transit Authority to bring a new center to Fort George Wright Drive and Government Way.

And while conservatives may criticize her for her vote supporting mandatory sick leave, Mumm notes that she helped modify the ordinance's provisions to make things easier for businesses to transition to the new system. Mumm, along with her fellow District 3 seatmate Karen Stratton, pushed to create exceptions for small businesses, giving a year-long grace period to startups and requiring businesses under 10 employees to offer just three days of sick leave a year, instead of five.

"I own a business," Mumm says. "I’ve owned a business for a long time in the community. I have my degree in business. My is in business administration."