Fantastic marmots and where to find them, near downtown Spokane

Nearly 50 dangerously adorable marmot pictures; seek them out on your own!


This week, our Outdoors Issue tackles the marvelous spectacle of urban wildlife. Naturally, that includes God's most majestic creature, the yellow-bellied marmot. Marmots that live in urban environments are unheard of in most cities across the United States, but in Spokane, the creatures have presumably been attracted enough by our low cost of living and thriving downtown to move to the city.


The Kendall Yards lot just east of the Inlander, across the street from the new My Fresh Market grocery store

Sometimes these marmots pop out of the big boulders like a game of Whack-A-Mole. Other times they stand still against the skyline, like silent protectors. If you're lucky, you can spot three or more lounging on a single group of rocks, or streaking across the dirt field to duck under the big shipping containers.

Notice how some of these marmots have luscious coats worthy of  Cruella de Vil's Marmot signature collection, while others look like scraggly river rats?

Elizabeth Addis, assistant professor of biology at Gonzaga University, has studied urban marmots and offers an explanation for the variance.

"The ones that didn’t have any fur were parasitized by skin mites," Addis says "They also had lower levels of triglycerides."

Triglycerides are found in fat, meaning the marmots with the gorgeous coats generally have better diets. 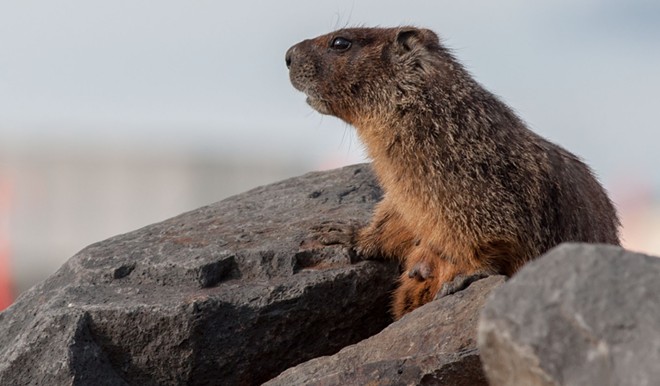 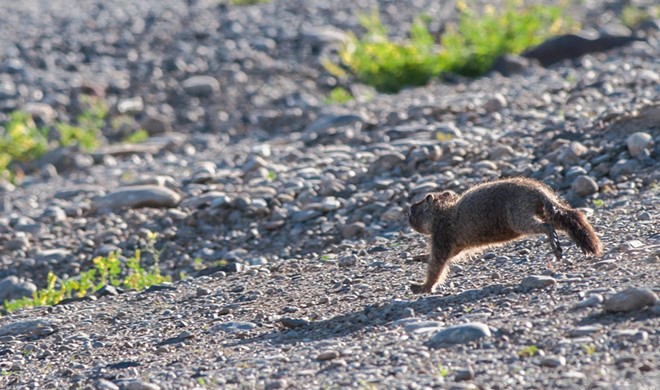 There's marmot hunting, then there's the equivalent to shooting marmots in a barrel. Marmots are so prevalent on Glover Field that you can see dozens of them as little specks from the top of the gorge across the Spokane River. Watch the marmots scurry about on the baseball fields, duck in and out under the chain-link fences, and scamper on the logs overlooking the river. They'll tease, play-fight and chase each other.

Many of these marmots have largely lost their fear of humans. I laid prone on my belly to get a better picture, only to have a marmot approach me curiously, eventually getting so close that my camera lens couldn't focus on him. (One marmot even took an interest in my backpack, though he didn't seem to know how to work the zipper with his tiny paws.) 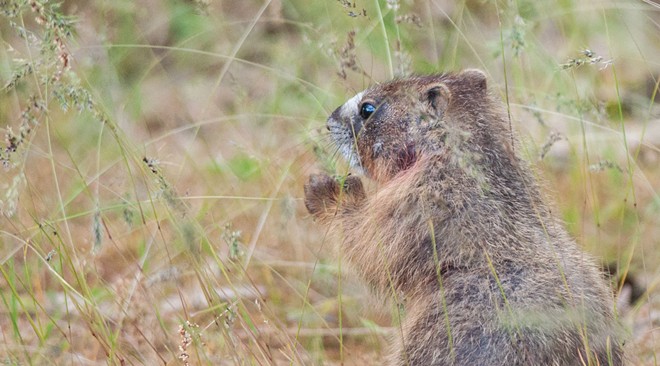 Burlington Northern tracks, near Sprague Pest Solutions
These marmots have a burrow in the sandy embankment below the railroad tracks. The trains rumbling past don't seem to bother them. Gonzaga students know these marmots well. A few dare to cross the campus itself, but it's more common to see them basking on the rocks on a trail on the north side of the river.

As much as marmots love to skulk under rocks, they also seem to cherish the spaces between concrete dividers on highways. Last year, this particular marmot appeared to be a supporter of Shelly O'Quinn.

Kendall Yards, near the westernmost osprey nest on the Centennial Trail


A small family of marmots lives near the homeless encampment in the empty lot next to the Centennial Trail near Bridge Avenue. A few weeks ago, one of the marmot pups turned up dead, right outside the marmot burrow. Addis, the Gonzaga biology professor, suspects it was killed by a dog. But look at the marmot's surviving family: Is it just anthropomorphism, or do they look like they're grieving the death of a child? 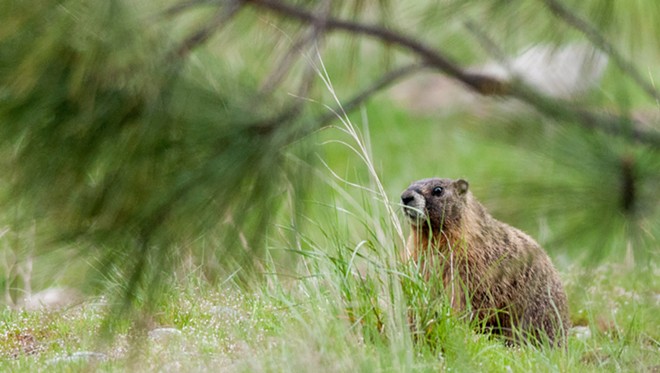 An osprey's hunt, a last-minute state budget deal, and other morning headlines