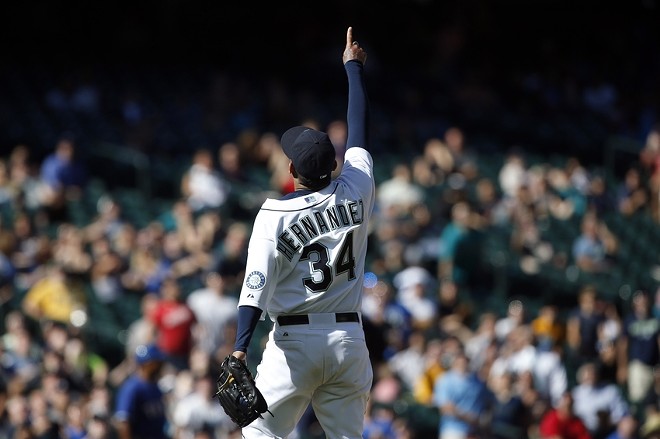 King Felix has been less than regal this year, and his fellow Mariners have scuffled to a below-.500 season so far.
Being an approximate .500 baseball team for half of a season will offer fair arguments for both optimism and pessimism. The 41-44 Mariners have found a way to showcase that duality in any given series, let alone any given week.

Two games into their mid-season homestand, the Mariners pitching has offered little parting thoughts that this high-wire act will result in playoff baseball. They didn't do so on the mound, with Felix Hernandez offering yet another multi-homer game on the Fourth of July. But the news off of the diamond has been far less reassuring.

News came out last week that sidelined starter Drew Smyly wouldn't be throwing a single pitch this year. Smyly opted for Tommy John surgery after dealing with yet another setback in his recovery from an elbow injury that progressed to a torn UCL. Smyly's recovery will be finished long after his one year contract with the Mariners will expire.

And then on July 4th it was revealed that Hisashi Iwakuma received platement-rich plasma treatment and a cortisone shot in his shoulder after his bullpen session. Iwakuma's return is now two weeks later than initially projected, and the soonest possible return is mid August.

If Iwakuma doesn't return, it's hard to see the Mariners maintaining their .482 winning percentage, let alone improving upon it. And that's a shame, considering the commendable efforts by Ariel Miranda, the return to form of James Paxton and the promising replacement starts by rookie Andrew Moore.

Watching the Mariners for the last 15 or so years will cure you of your rose-colored glasses. The lenses of realism or—understandably—pessimism would leave you unmoved by those 10 home runs last month by Mike Zunino, or the fact Ben Gamel could very well be leading the AL in batting average by the All Star break (pending at bat qualifiers). But scoffing doesn't change the fact that Robinson Cano and Nelson Cruz are on pace for 114 and 116 runs batted in this season.

The season has been frustrating on a past, present and future level. Look at the aforementioned production Cano and Cruz are generating when you actually put someone on base in front of them. Look how potent a lineup with MLB-level hitters outside of the heart of the order can be.

The season is hard to judge as the M's jostle around the standings while General Manager Jerry Dipoto and team try plugging every hole with the nearest object available. The Mariners are just three games back in the wild card, and could make a surge if key every day players get healthy and they find a way to acquire some arms for the rotation and bullpen.

With that being said, who would they be able to give up that would not jeopardize their future? Jarrod Dyson's .249 average, .692 on-base plus slugging won't warrant potential partners to line up with offers. And it'd take more than a hot May and June for Danny Valencia to be moved. The Mariners farm system is one of the worst in baseball, ranked 28th by ESPN's scouting analyst Keith Law and at a generous 23rd by Baseball America. Seattle just doesn't have anybody in the minors worth a top-level acquisition.

And the future seems impossibly fugue for the team now. Is their window open? Was it open over the last couple years? Can you contend now with a down-trending ace in Hernandez? Will the rookie ownership be willing to add money on top of a salary-heavy veteran core of Hernandez, Cano and Cruz?

If the answer is "no," it's hard to see much of the Mariners' limitations being resolved within the next five years, let alone by the end of the season. Teams like the Royals, Cubs and Astros became contenders through the draft and scouting, something of a quagmire for previous Mariners front offices.

And that's a disappointing prognosis not only for the long beleaguered fans, but also guys like Hernandez, who was the only guy in this 40-year-old franchise to decide to stick around. This season, despite it's injuries and losses, has provided the most fun team Seattle's produced in a decade. The young fellas and fun-loving veterans are reminiscent of the "You Gotta Love These Guys" days.

But after 15 years without a playoff series and a .506 winning percentage, floating around .500 just isn't good enough.

That was an earthquake, Hobby Lobby dinged for looted biblical artifacts, and morning headlines