The paper informed the newsroom of a "voluntary reduction in force" earlier this month.

Starting this week, journalists with hundreds of years of combined experience will walk out of the Spokesman-Review for the last time, as part of the latest reduction in staff at the Cowles' family-owned paper.


Call it buyouts, call it earlier-than-planned retirement or call it an excuse to get out of the business, but at the end of the process, the newsroom will lose 10 staffers — most of them higher-paid, seasoned veterans. At the beginning of the month, management had asked for a "voluntary reduction in force."

Undoubtedly, the most well-known personality leaving is Doug Clark. The longtime columnist announced Thursday that he’s “reluctantly accepted an offer” he can’t refuse and will leave after writing more than 4,500 columns for the paper during his time there since 1985. From Clark's announcement:

"While leaving now is the right economic choice for a guy of my, um, vintage, I hate leaving the job that I poured my heart and my soul into.

Practically from the moment I got into journalism (way back in 1974), my dream was to one day become a columnist for my hometown paper."


Last week, D.F. (Dave) Oliveria, a columnist primarily for the North Idaho-focused Huckleberries's blog, announced he had accepted a buyout, having worked at the Spokesman since 1984.

“I wasn't ready to retire when the SR made its generous buyout offer. But close. But I wasn't planning to completely retire," Oliveria explained to readers. (He declined to comment further for this article.)

A letter to staff from publisher Stacey Cowles, dated Aug. 2, explains why the paper is looking to cut staff, despite having some of “the best circulation numbers we’ve seen in years.” (To pad its circulation figures, the paper has offered some readers year-long Sunday subscriptions for the princely sum of one penny.)

“There is a renewed interest in The Spokesman-Review — even excitement — throughout our community. However, even with all of the strong support we are seeing from both local advertisers and subscribers, our advertising numbers are mirroring the significant losses being seen at other newspapers throughout the nation.

Though the structure of our company allows us to weather some of these changes differently than other regional news companies might, the drop in revenue is substantial enough that we have to make changes to ensure we have a sustainable budget for not only 2017, but for upcoming years. Unlike other media companies, the changes we need to make now are not about short-term profits, but about long-term sustainability.”


The other staffers said to be leaving in the coming months include Rich Landers, who has covered the outdoors extensively for the paper for more than 40 years; Mike Prager, who's been a Spokane newspaper figure since 1982 and covers transportation, weather, and general news; John Webster, who joined the Spokesman in 1973 and currently writes special projects and helps with IT; Nina Culver, who has been with the paper since 1995, and currently covers crime and public safety; Greg Lee, who covered prep sports; and Pia Hallenberg, who covered Spokane Valley.

Over the last two weeks, the Inlander reached out to each of the writers who might be leaving to see if they would like to comment. Most did not reply, and those who did opted not to comment further on their time at the paper.

The staff reduction comes one year after Rob Curley took over as editor. During his career, Curley has developed a reputation for being a leader in hyperlocal, digital journalism, but his initiatives inside various newsrooms have produced mixed results. (At the Las Vegas Sun, after a Curley-led video program cost the paper millions and flopped after just a few months, staffers “took to calling Curley ‘Harold Hill,’ after the main character from The Music Man, a con man who poses as the leader of a marching band and steals money from unsuspecting townsfolk,” according to a Las Vegas CityLife story.)

Back in December, Curley wrote that the S-R newsroom had added staff and planned to add even more in 2017:

"Newspapers around the country make all sorts of changes every year and try to tell their readers that it’s going to be better – that they’re doing more with less.

That’s not true and we all know it.

Well, we have a different strategy. We’re going to do more with more.

Over the past few months, we’ve added many more pages to our newspaper. Several days each week, the largest daily newspaper by page count in both Washington and Idaho is The Spokesman-Review.

Over the past month, we’ve added more local reporters to our newsroom. And there are plans to add even more in 2017. We want to give you more local business, real estate and economic coverage, many more health stories and much more from our neighborhoods and schools."


The Spokesman-Review is certainly not the only paper facing cuts. Nationwide, staffs continue to be reduced at both large and small operations. Even though many papers saw a surge in subscriptions after the presidential election, it hasn't changed the fact that revenue from selling ads continues to drop industrywide.

Unlike at the peak of the recession, when jobs were cut by the dozen, most small papers have shrunk one or two jobs at a time, every few months, as positions are left unfilled or senior staffers are pushed out earlier than their planned retirements.

The number of newspaper jobs has dropped 47.8 percent in the last 10 years. As of June 2017, there were about 166,100 nationwide, according to the Bureau of Labor Statistics.

That's fewer newspaper jobs than in 1947, the earliest data the BLS has. In June 1947, there were 239,300 jobs tied to newspaper publishing, and the total U.S. population was half what it is today.

The S-R hasn't been immune from the cuts, though it may be somewhat more insulated as a family-owned operation. In 2007, KHQ (which the Cowles family also owns) reported that the S-R was laying off 14 newsroom employees from a news-gathering staff of about 137 at the time. Another 25 were laid off in 2008. As with many other papers, some level of cuts became expected nearly yearly, "the new normal." The paper will have fewer than 60 news staff after this latest buyout. 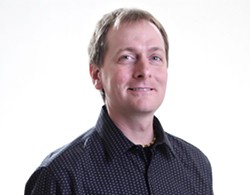 Curley: Overseeing the latest round of buyouts at the Spokesman-Review.
The Inlander sat down for a nearly hour-long interview with Curley on Thursday morning, but he declined to speak on the record in person. Instead, he asked that only email be used for his official responses. His answers mostly echoed what he wrote in a column about the cuts that ran this morning.

He points to the differences in how jobs are cut at corporately owned papers, who sometimes give workers two weeks' pay and a kick out the door, vs. how they are handled at family-owned papers, such as the S-R. He insists that these cuts were completely voluntary:


"When the numbers at the end of multiple quarters aren’t the right color, there is a right way and a wrong way to handle it. You give the people who worked hard for your community for so many years the opportunity to leave with dignity. Even respect.

That’s not even close to what happened at The Spokesman-Review. No one was tapped on the shoulder and asked to go to H.R.

It was generous and completely voluntary. And not the kind of voluntary that’s followed by a few winks.

That’s why storied local journalists like Doug Clark and D.F. Oliveria and Rich Landers will be leaving us over the next few months. The company offered a package that was so much better than what other local newspapers typically offer that even though the paper only needed a few to take it, 10 did."

The paper only needed a handful of people to take them up on their offer to leave, which came with severance pay for "involuntary termination," and up to 18 months of continued subsidized health care, according to the letter from Cowles to staff.

Curley explains in his column today that when more than that took him up on his offer, he had to gather his thoughts, but he knows that being a journalist is stressful, and for many who've wanted to leave the business, this offered them a way out. They'll be replaced, and the paper will keep its extra pages, he writes.

"Yes, we get to replace them. And not just with “younger” and “cheaper” people like other companies often do after moments like this. Some of the most-respected journalists in the nation have reached out to join The Spokesman-Review.

Will our newspaper be different?

You don’t lose this sort of talent, experience and knowledge and be the same. But we also aren’t giving up.


Staffers had until Wednesday to apply to leave, and the final staff changes are expected to shake out through the end of the year, as some have opted to stay on for a few months longer.

Since Curley arrived, the newsroom has been in flux. Beat assignments have been adjusted and reporters are pushed to write more (with digital analytics in mind). Meanwhile, before this round of buyouts, a handful of staffers decided to leave in recent months, including Addy Hatch, a local news editor; Geoff Pinnock, a visuals editor; Gina Boysun Pinnock, online director; Scott Maben, business editor; and Nathan Weinbender, a culture writer who joined the Inlander in February.