Rental plan
Vacancies are incredibly low in Spokane, and rent is skyrocketing. How can the region fix that?

Settling up
A settlement was reached in the lawsuit against two Spokane psychologists who helped devise the CIA’s brutal interrogation program. (via New York Times)

Not the right time for this particular speaker
click to enlarge 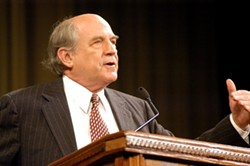 Charles Murray: The Bell Curve author is not welcome to speak at Boise's Red Lion.
Charles Murray, an author infamous for writing The Bell Curve, which explores the idea that inherent racial differences could be driving IQ disparity, was invited to speak by the Idaho Freedom Foundation at the Red Lion in Boise. But the Red Lion, fearing "protests and riots," refused to host Murray. Crying foul, the Idaho Freedom Foundation has moved the event to the Chateau des Fleurs in Eagle, Idaho. (Spokesman-Review)

No Apologies author: Say you're sorry
Former GOP presidential candidate Mitt Romney, giving us a glimpse into the alternate universe where he's president, called on President Trump to apologize for his response to last Saturday's violence in Charlottesville. (Washington Post)

He wouldn't attack a grieving mother... would he?
The mom of Heather Heyer, the woman killed in the terrorist attack in Charlottesville, says she doesn't want an apology from Trump and doesn't want to meet with the president after watching his most recent press conference. (CNN)

Blood-soaked untruths
Distracting from the wave of accusations accusing him of being racist against blacks, Trump handed his critics ammo — dipped in pig's blood — allowing his critics to accuse him of being racist against Muslims. In a tweet, he repeated his claim that a U.S. general during the Spanish-American war dipped bullets in pig's blood before executing Muslim insurgents, and attacks stopped. Historians say that claim is false: The general didn't commit those war crimes, and the attacks didn't stop. (New York Times)