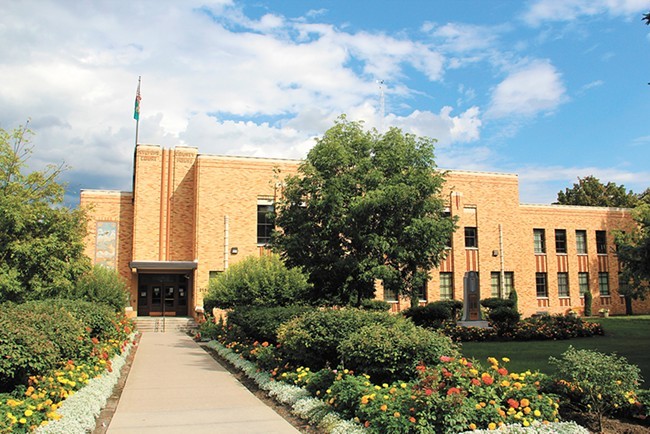 C Hanchey photo
The Stevens County courthouse, where the only district court judge is being accused of bending the rules.

And Goodwill toward vets
In this super-tight housing market, Goodwill is looking for a few good landlords to rent to veterans.

Lest ye be judged
The Inlander digs into allegations that a Stevens County district court judge bent the rules to punish the guy who hit her with a car.

Monumental changes in the works
At least four national monuments would lose their strict protection and could be reopened for new mining or drilling under proposals submitted to President Trump by Interior Secretary Ryan Zinke. (via New York Times)

Idaho bids farewell to an icon
Cecil Andrus. a Democrat who was the longest-serving governor of Idaho and as Jimmy Carter's Secretary of the Interior was the state's first Cabinet member, died on Thursday, one day shy of his 86th birthday, and is being mourned by Idahoans. (Idaho Statesman)

'Like' if you've fudged deductions
A WSU professor says that the Internal Revenue Service may be stalking your social media feeds, presumably to find out if you're dating anyone new, or if you still have feelings for the IRS. (Spokesman-Review)

Developer goodies
The city of Spokane is rejiggering its multifamily housing tax exemption incentives to try to encourage more apartment complexes in the tight market. (Spokesman-Review)

Party activist accused
A progressive activist was removed from his party positions after allegations that he had sex with a young woman too drunk to consent after the Washington state Democratic Party meeting in Walla Walla in April. (Spokesman-Review)

Look at what you made him do
President Trump is laying the groundwork for a powerful argument: The buck stops with Senate Majority Leader Mitch McConnell. (Washington Post)

Troubled when it walked in
Singer/songwriter/beach-blocker Taylor Swift has dropped her latest single, and apparently it's terrible. We wouldn't because the only music we listen to is podcasts. (Vulture)