WSU Athletics
Is that a blue-and-gold train about to run us over, or just the Cal Bears?
It was one ugly weekend for fans of the region's top-tier college football teams, with both Top 10-ranked Washington State and Washington falling in huge upsets, and Idaho blowing a big lead at home. At least Eastern Washington seems to have righted the ship after early-season travails. Let's break it down:

NOT EXACTLY COUGIN' IT, BUT REAL BAD
Correct me if I'm wrong, as I'm a relatively new transplant to the area, but "Cougin' it" means losing a game in the last minutes in a painful way that defies explanation, correct? So I guess we'll call what happened in Berkeley on Friday night as a good, old-fashioned ass-kicking, with the Cougs going down to the Cal Bears, 37-3.

After reaching the Top 10 in the polls for the first time in forever (2003, to be exact), and seeing Coach Mike Leach being hailed as a "genius" by media near and far, the Cougs managed exactly one field goal against one of the country's worst defenses. Cougs quarterback Luke Falk threw five interceptions, their vaunted defense was worked over for 102 yards by Bears running back Vic Enwere, and two days later, the Cougs found out that Athletic Director Bill Moos was quitting his gig at WSU to take the same job at Nebraska.

If there's any silver lining for the Cougs, it's that rival UW lost in a massive upset at Arizona State on Saturday night, meaning WSU remains essentially tied for the Pac-12 North lead with the Huskies and Stanford. WSU fell to No. 15 in the AP poll and No. 18 in the coaches' poll (it probably should be worse); they host Colorado Saturday night at 7:45 on ESPN. 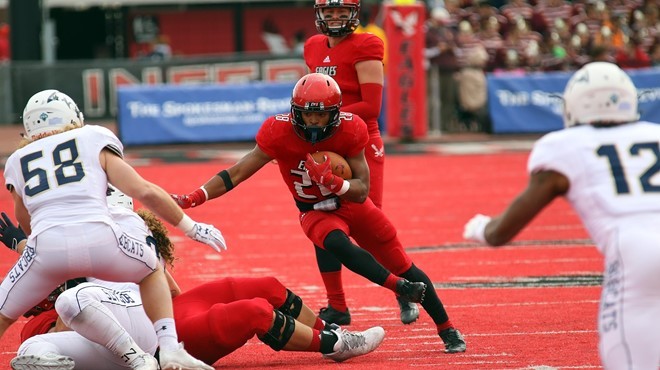 EWU Athletics
Antoine Custer Jr. carried Eastern Washington to victory against Montana State.
EAGLES GRIND ONE OUT
We've all become accustomed to Eastern Washington airing it out all game long behind QB Gage Gubrud and his always-expanding cast of receivers, but on Saturday, the Eagles used a battering-ram day of running to beat Montana State 31-19 and stay atop the Big Sky Conference.

The Eags got up early on the Bobcats in Cheney and stayed there, thanks to Antoine Custer Jr.'s 147 yards and two touchdowns. They got a little sloppy in the fourth quarter and almost let the Bobcats back into the game, but held on for the a win that puts the Eagles at 4-0 in Big Sky play heading into Saturday's game at Southern Utah, which beat a strong Weber State team on the road on Saturday. This one could be tricky. Saturday's win took EWU up to No. 8 in the country in the FCS.

VANDALS VOMIT UP A 20-POINT LEAD; PIRATES POUNCE ON PLU
Idaho was looking real good against Sun Belt foe Appalachian State, one of the conference's elite teams, leading the Mountaineers 20-0 in the third quarter behind 200 yards passing and two TDs from quarterback Matt Linehan. Then the roof fell in, as the Vandals gave up 23 straight points and lost at home 23-20. Ouch. The loss leaves the Vandals at 2-4 overall, 1-2 in conference. On Saturday, they travel to Missouri to pick up a paycheck against the woeful Mizzou Tigers of the SEC.

Whitworth rebounded from two straight losses with a win at Pacific Lutheran 17-14 behind backup quarterback Leif Ericksen (yes, really). Next up for the Pirates is a home game next Saturday against Puget Sound.

SEAHAWKS' BYE WEEK ACTUALLY A WIN
The region's NFL fans can be forgiven for heading to Green Bluff or puttering around the yard this weekend since the Seahawks were enjoying their bye week, but they missed a crazy weekend in pro football.

The biggest news was the potentially season-ending injury to Green Bay quarterback Aaron Rodgers. Considering the Packers were arguably the best team in the NFC to date, having beaten both the Seahawks and the Cowboys, the injury blows the conference wide open. With the defending champ Atlanta Falcons struggling (they lost to the Dolphins yesterday), and the Cowboys staring down a six-game suspension for star running back Ezekiel Elliott, the Seahawks' main foes for conference supremacy are ... the Rams? The Eagles?

If the Seahawks get hot, they can roll through the season and take home-field advantage into the playoffs. They hit the road to play the 1-5 New York Giants on Sunday.

Firefighters back Prop 2, bombings kill 300-plus in Somalia, morning headlines