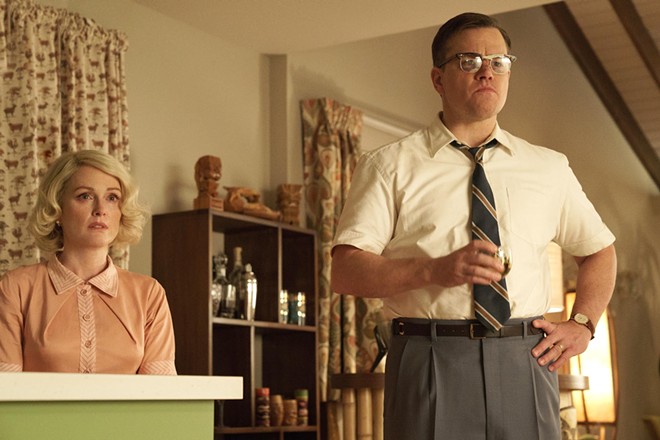 Julianne Moore and Matt Damon in George Clooney's Suburbicon.
Normally the release of a film directed by George Clooney, co-written by the Coen brothers and starring the likes of Matt Damon, Julianne Moore and Oscar Isaac would be cause for celebration. But the dark comedy Suburbicon isn't exactly bowling over critics, despite its pedigree in front of and behind the camera.

You should expect, then, the horror reboot Jigsaw to take the box office this Halloween weekend, unless Tyler Perry's latest Madea vehicle holds on to its No. 1 spot. Here's what else is hitting theaters on Friday:

AMERICAN SATAN
A heavy-metal take on Faust, with a mysterious stranger striking a morbid deal with a fame-hungry rock band on the Sunset Strip. Rated R.

JIGSAW
Because the first seven (!) entries in the Saw franchise apparently didn’t say everything they wanted to, we’ve now got an eighth film resurrecting the demented Jigsaw killer, who continues to ensnare his victims in sadistic traps. Happy Halloween, I guess. Rated R.

LET THERE BE LIGHT
Kevin Sorbo, aka TV’s Hercules, directs and stars as (per the film’s IMDb page) “the world’s most famous atheist,” who’s in a car accident and miraculously finds faith. Rated PG-13.

LOVING VINCENT (3 stars)
Set in the 1890s, a postmaster’s son is sent to deliver a long-lost letter written by the late Vincent van Gogh, only to find himself questioning the circumstances of the influential artist’s suicide. The heft of the story might not justify its length, but its hand-painted visual style is beguiling. At the Magic Lantern. Rated PG-13.

SUBURBICON
A pitch-black comedy that reveals — gasp! — there might just be an amoral seediness lurking beneath the polished veneer of 1950s suburbia. Rated R.

THANK YOU FOR YOUR SERVICE
Miles Teller stars as a soldier who returns from Iraq after he survives a bombing and has trouble reacclimating to normal domestic life. From the screenwriter of American Sniper. Rated R.

WALKING OUT
A teenager and his estranged father are injured in a bear attack and fight for survival in the wintry Montana wilderness. Executive producer (and Eastern Washington native) Katherine Ann McGregor will be hosting an audience Q&A following Friday's 7pm showing at Village Center Cinemas Wandermere. Rated PG-13. 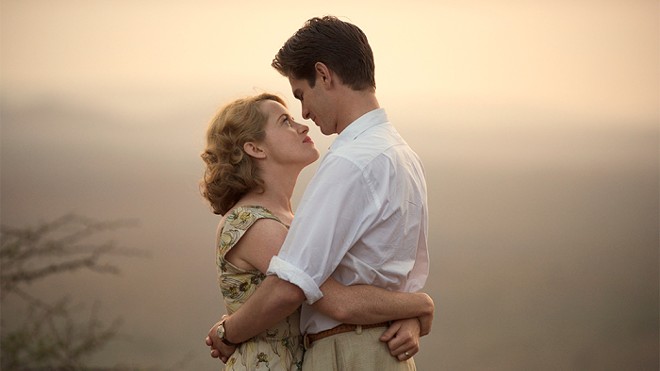 GEOSTORM (1 star)
A colossally stupid disaster movie, in which rogue American scientist Gerard Butler is Earth's only hope when the satellites protecting us from climate change malfunction. You’ll be rooting for the geostorms. Rated PG-13.

MARK FELT: THE MAN WHO BROUGHT DOWN THE WHITE HOUSE (2 stars)
A stodgy bio-drama that feels like the adaptation of a Wikipedia page, focusing on the FBI agent and Watergate whistleblower better known as Deep Throat. Rated PG-13.