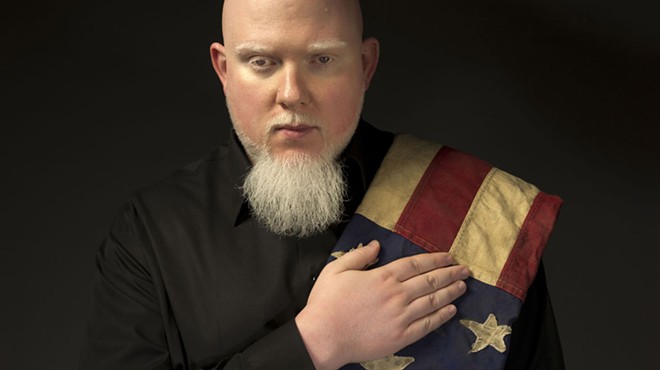 Brother Ali headlines the Bartlett on Wednesday.
Halloween is obviously one of the week's biggest nights, but there's plenty going on all week long, as you can see in our event listings and Staff Picks. Here are some highlights of the week ahead:

WORDS | Head over to Spark Central for a book release and performance called Tarot Time, a collection of community writers sharing stories inspired by the Major Arcana Tarot set.

LIVE MUSIC | It's Halloween night, duh, so after you either go trick-or-treating or stay home and hand out candy, get out on the town for one of the many music events happening.

The Knitting Factory welcomes costumes for the Silversun Pickups show; you can read about the long-running rockers in our interview with the band. They're joined by Minus the Bear.

The Bartlett hosts masterful singer/songwriter David Ramirez, a worthy headliner on a big night out.

WORDS | Head to the downtown Spokane library for a talk on Writing in the Margins: Transforming the Stories We Tell About Race, a free discussion led by Jessica Maucione.

LIVE MUSIC | Brother Ali is one of the most mesmerizing rappers around, and he's headlining a show at the Bartlett tonight. Check out a sample of this most unique artist:

FESTIVAL | Emerge hosts a Day of the Dead Fiesta in Coeur d'Alene, full of great music, food, and most importantly, people.

WORDS | Pivot returns to the main stage at the Washington Cracker Co. Building for its next chapter of the storytelling event, this one revolving around "promises" as its theme.

LIVE MUSIC | Deer Tick delivers one of the best shows in modern rock, and this time they're doing a half-acoustic, half-rock performance at the Bartlett in support of their two new albums. We talked to the band before they hit the road for their first-ever Spokane gig. The show is sold out, so hit the web and try to find some tix! Here's a sample:

COMEDY | Greg Fitzsimmons is one funny cat. I know him from his wry observations on a bunch of those "I Love the '80s" shows on VH1 way back when, but he's a standup pro and headlining Spokane Comedy Club all weekend.

BENEFIT | KYRS hosts its Spokane Record Expo Saturday morning, where you can get some aural goodies on the cheap while supporting the station.

CLASSICAL MUSIC | Spokane hometown boy-turned-international vocal superstar Thomas Hampson swings by for a couple shows at the Fox on Saturday and Sunday. Overtures and Arias should be a treat for fans of that sweet baritone. Watch for an interview with the man in the new issue out later this week.

LIVE MUSIC | A mighty fine show at the Bartlett tonight courtesy of The Weather Station, joined by James Elkington and Liza Day. Here's a sample:

REVIEW: Anthony Jeselnik knows no boundaries, and it's hilarious