There's a long list of of people who endorse Spokane Superior Court Judge Tony Hazel's bid to retain his seat on the bench. 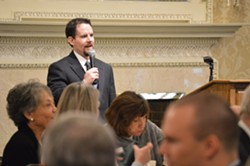 Superior Court Judge Tony Hazel
The former Spokane County deputy prosecutor was appointed by Gov. Jay Inslee in April to replace the late Judge Sam Cozza. The list of names on his campaign website reads like a who's who of local jurists.

"The fact that I have the legal community standing behind me, I think, demonstrates a confidence in me that I make a very good judicial candidate," Hazel says.

But to hear his challenger tell it, those names are exactly the reason why Hazel should not remain on the bench.

Spokane County public defender Jocelyn Cook says the endorsements, especially from attorneys who may appear in front of Hazel in the future, represent an inherent conflict of interest. Throughout her campaign, she's sought to call attention to what she believes is a flawed judicial appointment and election system in Washington state.

"How does a person know that they're being impartially treated when there's literally a list of lawyers who are saying 'I'm with this guy?'" she says. "And when you rest on that list as your sole qualification, how could your impartiality not be reasonably questioned? What about the 100 other litigants who didn't [offer support]?" 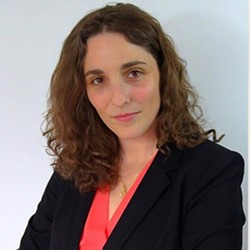 Public defender and challenger Jocelyn Cook
In response, Hazel says that his endorsements represent a glowing peer review and will not impact his ability to make decisions. He adds that Cook doesn't appreciate the rigorous process for judicial appointments, which includes references from supervisors, lawyers and judges that he's worked with in the past.

"You don't get to pick your references," Hazel says. "The process I went through is similar to the process used to select a U.S. Supreme Court justice. The difference is there's no confirmation by the Senate."

Cook defends her refusal to participate and uses as an example the third candidate in this race, who was knocked out in the primary. J. Scott Miller, an attorney with more than 30 years of experience, was originally rated as "not qualified," Cook says, then rated as qualified later this year.

"He's argued in front of the Supreme Court in Washington and Idaho," she says. "Just his résumé alone is twice as long as Tony and me. I don't know how I can justifiably submit myself to a rating system that's so easily malleable."

As a career defense attorney, Cook says her experience defending those accused of crimes, and seeing the real-life impact of different outcomes in the criminal justice system, gives her an advantage in judicial decision making.

"If you're going to preside over the people who are impacted, you need to stand next to them," she says. "It'd be good to maybe have gone to the hospital where you're going to send them, or maybe see what it's like when someone's coming off heroin or methamphetamine.

"Every judge says they're going to follow the law and provide due process," she adds. "But what does that mean if you haven't actually seen the impact that power has on people?"

Hazel says he was "known as compassionate and reasonable" during his career as a prosecutor in Spokane. He says he's seen real impacts of the system through victims of crime, as well as the people he's prosecuted.

Both candidates acknowledge that emotion is a useful guide for a judge, but ultimately, decisions must be driven by logical application of the law.