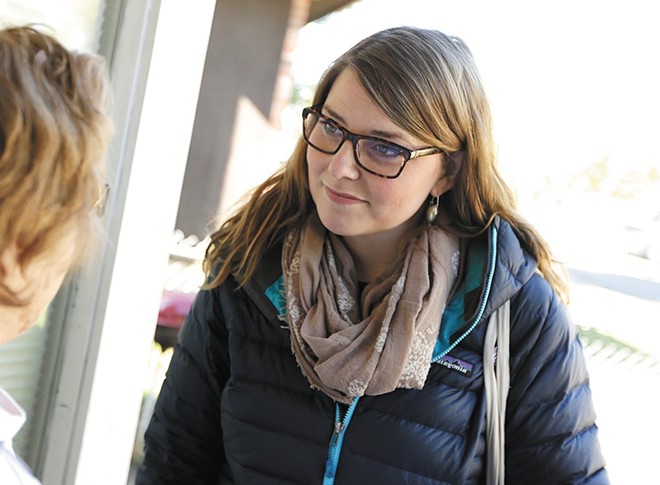 Entering Election Day, Spokane's city council leaned heavily toward liberal/progressive philosophies and policies; that'll continue to be the case after all the ballots are counted.

Not all of the mailed ballots are in, and just over one-third of you voted — 34.16 percent of the nearly 305,000 registered voters in Spokane County. All numbers have been updated to reflect Wednesday afternoon's newest ballot count.

In the District 1 race, Kate Burke will join the council after breezing past Tim Benn. Breean Beggs (District 2), serving the rest of his first term, and Candace Mumm (District 3), beginning her second, retained their seats as well:

Proposition 2 • By 57.5 to 42.5 percent, Spokane voters rejected the ballot initiative that would have fined owners of oil and coal trains who did not take steps to make their cargo safer; there were significant questions regarding the proposition's legality, and the industry-funded opposition raised more than $160,000; Prop 2 backers brought in less than $6,000.

Spokane Municipal Court, District 1 • Adam Papini, a city prosecutor who continued to run after being charged with a DUI in Cheney in June, lost to incumbent Tracy Staab, receiving just 26.3 percent of the vote.

Spokane Public Schools, Position 5 • Incumbent Mike Wiser, appointed to the school board in March, received 62.9 percent of the vote to Jennifer Thomas' 37.1 percent. Another school board member, Deana Brower, was unopposed.

A libertarian, defiantly far-right majority on Spokane Valley's city council is giving way to a more centrist group of candidates, shifting the balance of power in the city of nearly 100,000; Mayor Rod Higgins, in a race that finally has been called, defeated Chris Jackson by 271 votes. (winners in bold type; incumbents in italics):

7th Legislative District • Bordered by British Columbia on the north and Idaho to the east, it consists of parts of Spokane and Okanogan and all of Stevens, Pend Oreille and Ferry counties: Republican Sen. Shelly Short of Addy and Rep. Jacquelin Maycumber of Republic, who succeeded Short in February, won with 68 and 67 percent, respectively.

In Seattle's eastside suburbs, Manka Dhingra defeated Jinyoung Englund by 10 points in the 45th District; her victory gives Democrats control of the Washington State Senate, which had been the only legislative body on the West Coast held by Republicans, and returns one-party rule to Olympia for the first time in four years. (Seattle Times, New York Times)
• How will Democratic control of the state Senate affect policy decisions in Washington? The Spokesman-Review's Jim Camden points to seven potential changes in Olympia.

In Virginia, Democratic lieutenant governor and physician Ralph Northam was elected governor, defeating former Republican National Committee chair Ed Gillespie; the party also swept statewide offices and is poised to flip the state's House of Delegates, where the GOP had held a commanding 66-34 advantage. (Washington Post)
• Phil Murphy, who ran on a platform including aa $15 minimum wage and legalizing marijuana, took back New Jersey's statehouse from Chris Christie, who leaves his two terms in office as one of the nation's least popular governors. (New York Times)
• Analysis: President Trump's election-night tweets made a bad night for Republicans much worse for himself. (Washington Post)

Harvey Weinstein is even worse than you thought he was
The sordid tale of the Hollywood mogul, accused of sexually assaulting multiple women, now includes an army of spies — private investigators, including former members of Mossad, Israel's intelligence agency — hired by Weinstein to harass and intimidate actresses and journalists, according to the New Yorker's Ronan Farrow.
• These 63 women have accused Weinstein of sexual harassment and assault. (Vanity Fair)

Arrest in Valley slaying
A multi-agency manhunt lasting several hours ended yesterday with the arrest by Spokane police of 37-year-old David Campbell, accused of stabbing to death a woman believed to be his ex-girlfriend earlier in the day in Spokane Valley. (Spokesman-Review)