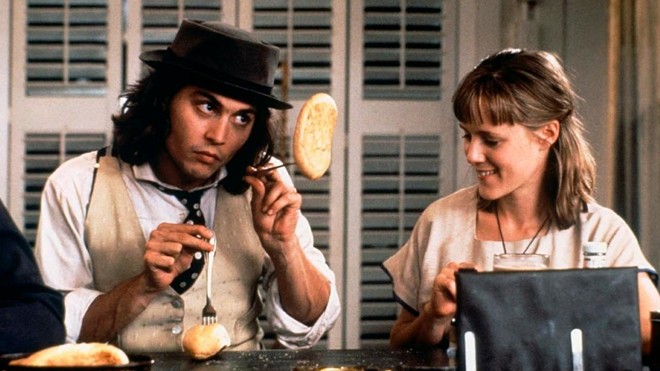 Johnny Depp and Mary Stuart Masterson in 1993's Benny & Joon, SpIFF's opening night film.
The Spokane International Film Festival is heading into its 20th year, and it has just announced a schedule of diverse and thought-provoking features and shorts that will screen between Feb. 2 and Feb. 9 at the Bing Crosby and Magic Lantern theaters.

This year’s opening night film is Benny and Joon, which is right up there with Vision Quest as one of the most famous films shot in Spokane. The 1993 comedy-drama stars Johnny Depp as a Buster Keaton-obsessed eccentric who begins an unlikely relationship with a mentally unstable artist played by Mary Stuart Masterson, whose brother (Aidan Quinn) is considering institutionalizing her. Notable locations in the film include the Peaceful Valley neighborhood and Riverfront Park, and the Garland Avenue restaurants Mary Lou's Milk Bottle and Ferguson's Cafe. Benny and Joon screens at the Bing on Friday, Feb. 2, at 8 pm.

Also in this year’s lineup are the well-received animated features Window Horses and Tehran Taboo, the LGBTQ sex comedy The Feels, and the Estonian drama The Fencer, which received a 2016 Golden Globe nomination for Best Foreign Film. Amongst the other feature documentaries are Bronx Gothic, a profile of performance artist Okwui Okpokwasili, and No Man's Land, about the recent Bundy family standoff in Burns, Oregon.

Local director Shaun Springer's anthology film The Garageland Chronicles, which we wrote about back in October, will have its premiere on Saturday, Feb. 3, at the Magic Lantern. And keep an eye out for the festival's popular Best of the Northwest shorts program, which showcases the work of Washington, Idaho and Oregon filmmakers; it shows at 5:30 pm before Feb. 2's Benny and Joon screening.