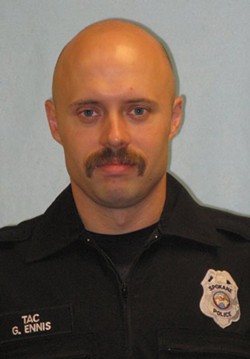 Sgt. Gordon Ennis
Following reports of a sexual assault by a Spokane police officer during a party at another officer's house, a second officer has been placed on administrative leave. The officer accused of assaulting a female coworker is Sergeant Gordon Ennis — he was placed on administrative leave earlier this week — during a Saturday night party at Officer Doug Strosahl's home. Strosahl has been placed on leave, and the Spokane County Sheriff's office is investigating. Sheriff Ozzie Knezovich believes the officers tampered with evidence.

In celebration of National Cat Day, Spokane Uber drivers are participating in #UberKITTENS, bringing kittens to locals who request 15-minuted snuggle sessions. The event supports the Spokane Humane Society and all kittens are available for adoption.

The latest edition of the Inlander is now available on stands and online. This week's issue includes an in-depth look at the effects of standardized testing in schools, how WSU researchers are exploring the potential to grow quinoa on the Palouse, the meaning of band T-shirts and a profile on a Spokane author's debut novel about sexy Viking warriors.

Other headlines of the day:

Getting tired of all these presidential debates? The third GOP debate happened last night, and included rants from Cruz, jabs from Bush to Rubio and more head-shaking comments from Trump. NPR summed up the debate's top highlights for those who didn't sit through the whole debacle. (NPR)

Meanwhile, Republican Rep. Paul Ryan was formally voted into the position of the 54th Speaker of the House. (CNN)

A major announcement by China's Communist Party says the government will now allow families to have two children instead of only one. The decision was made in part to counter the rapid aging of the country's workforce. China had in the past eased some restrictions on the policy, allowing couples to have two kids if one of the parents was an only child. (New York Times)