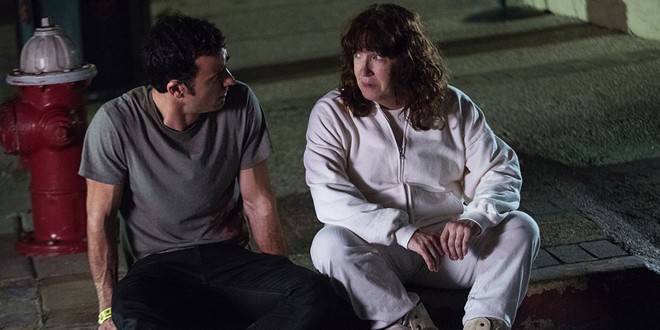 The Leftovers
"For New Year's, Kevin, let's both promise each other that if either of us dies, we'll stay dead this time."

Five years ago, I wrote up a list of suggested New Year’s Resolutions for TV Showrunners. Presumably, they were widely adopted across the industry, which is why TV is so good now.

For 2016, I decided to follow up with even more suggestions for TV writers, and creators, thereby polishing the Golden Age of Television until it gleams and sparkles:

1. “If I must bring a character back from the dead, I will use magic, science, time travel or the power of prayer, but I resolve to never use camera work and editing trickery to fake out an audience.”

2. “Similarly, I resolve to never bring back a deceased fan-favorite character by making them a hallucination only they can see.”

3. “I resolve to only kill off or save the life of a character because it’s good for the show, not because it’s ‘surprising.’ “

4. “I resolve to use the flexibility over length and episode numbers that Netflix provides to make stories tighter, more compact, and better paced, rather than looser and more aimless.”

5. “If I feel I MUST include sexual assault as a plotline, I will never use said sexual assault to simply say, ‘hey, this guy’s a really bad dude!’ but instead to honestly explore the actual impact of such acts.”

6. “While I resolve to be unafraid to include depression, existential and general malaise in my comedy, I also resolve to occasionally throw in a few jokes as well.”

7. “I resolve to never feature female journalists in my shows sleeping with sources to get a story, but instead often show them eating unhealthy microwavable junk food in their cramped messy apartments.”

8. “I resolve to never lie about future plot twists in interviews with entertainment journalists. Instead, if I want to keep the twist secret, I will tell them ‘You’ll just have to wait and see…’ and then give an enigmatic smile.”

9. “I resolve to use betrayals and shifting alliances sparingly, with the knowledge that each subsequent betrayal carries less weight and meaning.

10. “I resolve to use a score that is hummable, memorable and not just noisy. See: Human Target; The Leftovers.”

11. “I resolve to create Strong Female Characters by giving them serious flaws.

12. “I resolve to invent a lead character that somehow isn’t a middle-class middle-aged brooding male anti-hero.”

13. “I resolve to never constrain my story with flash-forwards, because the future, you see, isn’t written yet. And for God’s sake, I will stop doing so many ‘THREE WEEKS EARLIER’ flashbacks”

14. “Even if I’m on HBO or Showtime, I will not show bare breasts just for the sake of showing bare breasts. Breasts have to be earned.”

16. “I resolve to try to stack my writer’s room with diversity — not just with race, but with gender, religion, sexual orientation, ideology, class, and geography. And not because it’s an act of socially conscious charity or anything, but because different backgrounds can bring different jokes that a team of a dozen white guys with Harvard degrees can’t.

17. “I resolve to relearn the lost sacred art of the great stand-alone episode.”

18. “If I feel the compulsive need to feature scenes with torture, I will show the pragmatic flaws with torture, not just the moral flaws. Torture is not the same as a Jedi mind trick.

20. I resolve to give my setting a true sense of place, instead of just New York, L.A., or Anytown U.S.A. (See: Justified; The Leftovers Season 2; Friday Night Lights)

21. “I resolve to be stubborn enough to refuse to bend to foolish fan demands, but open enough to consider that their criticism just may have a point.”

22. “I resolve to cast more unattractive actors and actresses. Or at actors or actresses other than hot young .”

24. “I resolve to make my show’s big exciting questions hinge on“what happened next” instead of “is this place magic or what?” or “who is that guy?” or “is that real?” or “Why does Kalinda never ever talk to Alicia anymore.”

25. I will stop making Modern Family.

THIS WEEK: Steven Wright and local comedy, a new gallery and Rhetoric in the Ring