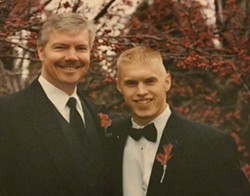 courtesy of Jeff Dobrow
Jeff and Rick Dobrow, on the day of Jeff's wedding in 2004

Last Friday, Interim Police Chief Rick Dobrow announced his last day with the police department would be March 1st. He'd previously said he was interested in taking the police chief job if he'd been offered it.

When the Police Leadership Advisory Committee made its recommendations for Spokane's new police chief, however, it called for a four-year degree. And Rick Dobrow doesn't have one.

But Jeff Dobrow, his son, does have a four-year degree. In fact, the 31-year-old Air Force officer has nearly finished his doctorate. From his vantage point in Great Falls, Mont., it's been frustrating to watch the process the last few months, and he says he felt compelled to write a letter in his father's defense. (He let his dad know he was writing it, but says his dad hadn't read it when he sent it)

Jeff e-mailed that letter to Condon and various news media outlets around 9 pm Wednesday night. I've made a few minor edits for clarity, but otherwise have left it as is:

I am writing this open correspondence to express my concern, not only as the son of Rick but also as one of your constituents. Crippling to the political pressures from both the Police Leadership Advisory Committee and Ben Stuckart and other city council members, the decision to replace Rick Dobrow with a “more qualified” Police Chief is a waste of resources and anything but cost-effective.

The irony in this is nearly comical considering the recent Intermodal Precinct “scandal,” its fiscal consequences to the city and how Mr. Stuckart and you passed the buck on taking responsibility for the decision to move forward with the precinct changes. Reading the PLAC report, I’m unsure Spokane will be able to recruit the ideal candidate it desires. Spokane’s history in recruiting this position from outside the department is quite poor to include your decision to bring in Straub after his unfavorable departure in Indianapolis, despite recommendations not to do so. Even if Straub hadn’t been hired, one of the other two final candidates was the center of controversy after falsifying his resume to reflect completion of higher education.

Indeed, barring a four-year degree, the PLAC report’s suggested job description is modeled after the attributes of Rick Dobrow. His “advocacy for community policing,” stance on diversity and collaboration, 34 years of experience in law enforcement covering everything with the exception of bombs and dogs, [his] irreproachable record of integrity and support of civilian oversight all make him a surefire choice to lead the department.

Additionally, his unmatched desire to improve the community he loves meets the PLAC’s intention to hire a community-focused leader. Furthermore, the “guardian” not “warrior” approach to policing describes my father more so than any candidate you could find. He is both compassionate and approachable… a leader’s leader. I am confident that these were the sentiments shared by department employees when interviewed by the PLAC. Pursuing an eventual career in politics, I am nearly complete with my doctorate in Public Administration and as a United States Air Force Officer with 13 years of service. The fact that I regularly seek my father’s opinion and advice in the areas of leadership, demonstrate his experience and expertise as a leader in public service.

Although my father is now looking forward to retirement, he would have happily continued to serve the great community of Spokane with honor. Spokane would have sustained further reductions in crime and renewed relationships between the police and civilian communities. Being academically adept in community-oriented policing methods, I would engage in conversation after conversation with my father on a number of law enforcement issues.

Despite not possessing a degree, his experience translates into prowess and an ability to communicate with other professionals. His attendance at national police leadership conferences and completion of the Southern Police Institute at the University of Louisville as his class’s top graduate is further evidence of Spokane’s investment in my father and his ability to equal academic credentials.

My father has the deepest respect for you and your office as well has the Spokane Police Department and the Spokane community. This is why I am writing on his behalf. I do not share the same respect for the civilian leadership and, indeed, would be much more active in seeing that it is replaced if I resided in Spokane. Instead, because of my father’s influence to serve my country, I am unable to do so.

Therefore, I am appealing to your other constituents to consider alternative options at the voting polls next election for both your office and the city council, unless considerable changes in the transparency, and decision-making of these offices are made. I hope for the sake of the city that my father has dedicated 22 years defending, you will muster a little more political courage to stand up for what is right moving forward in your political career. My father selflessly served for over three decades because he felt called to do so. At this point, I’m unsure if anyone making executive decisions for Spokane can fathom this and alternatively feel as though they serve only themselves.

The MAC board votes to fire the museum's executive director...again